Jair Bolsonaro’s shock election victory in 2018 was made possible by his pact with the Social Liberal Party (PSL). But since he took office, the party’s internal politics have become increasingly tumultuous, with Bolsonaro eager to wrest control of key appointments and resources away from PSL godfather Luciano Bivar. This conflict has led Bolsonaro to launch the Alliance for Brazil, but he faces an uphill battle to register it in time for 2020 municipal elections, and he may be underestimating the importance of the PSL’s access to public campaign financing, writes Mark S. Langevin (George Mason University).

In November 2019, President Jair Bolsonaro launched his new Alliance for Brazil party (APB, hereafter Alliance) as a vehicle for his populist brand of social conservatism and a means of extending his strategy of political disruption. This development should come as no surprise given that the president had switched party affiliation eight times before his historic election to Brazil’s highest office in 2018.

Bolsonaro and the internal politics of the PSL

For over three decades, Bolsonaro used different parties to obtain electoral advantage, most recently the Social Liberal Party (PSL) that carried him to the presidency. On Bolsonaro’s behalf, Gustavo Bebbiano and Paulo Marinho negotiated a pact with the PSL’s godfather Luciano Bivar and with Paulo Guedes, who would later become minister of the economy.

The pact gave Bolsonaro the party’s nomination, made Bebbiano the party’s president in place of Bivar, and gave Guedes the chance to make his Chicago School economics professors proud at the controls of Brazil’s economy. With Guedes doing the policy work, Bolsonaro would be given free rein in his populist, social-conservative discourse and his ranting against the Workers Party (PT) of Luiz Inácio Lula da Silva and Dilma Rousseff.

The pact worked. Bolsonaro was elected president and the PSL rose to become the second largest party in the Chamber of Deputies, which was a miracle of sorts. More recently, however, the arrangement has crumbled into dust.

Bivar ceded formal control over the PSL to Bebbiano during the campaign, with Bebbiano then stepping down after the election to become the Secretary General of the Presidency. But in a shocking move, the president went on to dismiss Bebbiano just weeks after his inauguration owing to a PSL campaign-finance scandal involving Minister of Tourism Marcelo Álvaro Antônio. The scandal drags on, but Bebbiano is long gone.

Bebbiano and Marinho proceeded to migrate to the moribund Brazilian Social Democratic Party (PSDB) while the president pondered how he might exert personal control over the PSL and its multimillion-dollar campaign war chest for 2020.

During his first year in office, the president tested the personal loyalty of the 53 PSL federal deputies and three senators by undercutting the organisational leadership of Bivar. The pot boiled over in October 2019 when President Bolsonaro withdrew his son Eduardo’s nomination to become Brazil’s ambassador to the United States and attempted instead to install him as the PSL’s leader in the lower house (in place of Delegado Waldir).

It was both a calculated risk and a loyalty test for the PSL congressional delegation of Bivar and Waldir. The gamble failed because Bivar exercised legal authority over the party and its public financing through both the party and its electoral funds. Bolsonaro lost this battle, and now he finds himself having to build his own political party from scratch.

On 12 November 2019 Bolsonaro announced his departure from the PSL and launched his own party, the Alliance for Brasil. Given that the party requires legal registration with the Supreme Electoral Council (TSE), including the collection and validation of half a million membership cards, this is quite an ambitious venture.

Indeed, if these registration requirements are not met by 4 April 2020, the party will be unable to field candidates in October’s municipal elections. Bolsonaro and his Alliance are running against the wind and may not meet that deadline, with Bolsonaro himself remarking:

I’m not obsessed with establishing the party. I think God will help me, but you know that the municipal elections won’t influence the 2022 presidential elections.

In the meantime, loyalists are busy gathering membership cards and former TSE minister and Alliance Secretary General Admar Gonzaga is preparing the organisation to compete in this year’s mid-term elections.

Bolsonaro will preside over the new party, with his son Flavio tipped for the vice-presidency despite his involvement in an ongoing corruption scandal. Eduardo Bolsonaro, meanwhile, will serve on the national directorate, whereas even the relatively low-profile fourth son, 21-year-old Jair Renan, will exercise an official function. The new party is both a family affair and a loyalty test.

Bolsonaro’s escapade splits the second largest party in the Chamber of Deputies, the PSL, into two competing factions: one loyal to Bivar (and public campaign financing) and another made up of dissidents who remain loyal to Bolsonaro (and his bandwagon effect).

As it stands, the PSL’s national directorate is busy finding ways to suspend the dissidents, not least the president’s third son Eduardo Bolsonaro. Eduardo is the nominal leader of the party in the Chamber of Deputies, but he and another 13 PSL deputies were suspended by the party leadership in December and now face expulsion for their infidelity in attempting to form the Alliance.

Days after the PSL’s decision, federal judge Romeu Gonzaga Neiva overruled the suspensions to restore Eduardo’s command over the PSL delegation in the lower house and force Bivar and his allies to consider expulsion to finally put an end to internal dissension. The PSL argues that the seats belong to the party on legal precedent. Eduardo and the other dissidents contest this interpretation and will draw swords in the courtroom to delay the matter until the Alliance is legally registered.

So far, the president and his new party can count on the allegiance of up to 27 federal deputies. For now it seems that the remaining two PSL senators, Major Olimpio and Soraya Thronicke, will not make the switch. With the exception of first-term deputies Chris Tonietto and Major Fabiana, both of Rio de Janeiro, the Bolsonaro loyalists did not depend on PSL-related campaign financing for their 2018 electoral victories. Rather, most of these deputies owe their seats to their social media efforts and the Bolsonaro bandwagon effect that gathered real momentum in September 2018.

In contrast, the PSL financed 94 percent of Tonietto’s 2018 campaign and 95 percent of Major Fabiano’s election expenses. These two deputies may have been swayed by their state delegation colleagues given President Bolsonaro’s popularity within their ranks.

Of the remaining 26 PSL deputies, who are Bivar loyalists, nine received more than 20 per cent of their 2018 campaign donations from the party, including Bivar himself. Even with very modest public financing, the PSL was able to extend its electoral reach beyond Bolsonaro’s hype in 2018, a lesson lost on the president.

The question is, without experience or money can Jair Bolsonaro design and build a new political party?

Much of the political party fragmentation that complicates the legislative process and bedevils the Brazilian polity stems back to the pursuit of public financing for parties and campaigns.

In the case of the PSL, the party received only 0.5 per cent of the 2018 Federal Electoral Fund, but it will have approximately 20 per cent of this fund to spend on the 2020 municipal elections. The success of the PSL in 2018, spurred on by Bolsonaro’s presidential election victory, makes the party the primary beneficiary of public campaign financing alongside the PT. The PSL will spend over $80 million dollars from both the Party and Special Elections Fund for city council and mayoral races throughout Brazil’s 5,570 municipalities.

Bolsonaro and the PSL proved in 2018 that social media may trump public financing, but Luciano Bivar and his loyalists are quite happy to take the money and run. The president’s decision to split from Bivar and his PSL, forgoing millions of dollars in campaign financing in the process, is either a bold game-changer or an amateur’s misstep.

Against all odds, the president is now calling on voters to reject candidates who accept public campaign financing. Not only has Bolsonaro succeeded in ripping apart the most successful Brazilian political party in 2018, he now wants to separate loyalists from prospective allies, pitting those who accept public campaign financing against those who do not in this year’s elections.

It is important to note that the establishment of the Federal Electoral Fund came after the political reform that made corporate contributions illegal in response to the Lava Jato corruption scheme. Equally important are the serious allegations that Bolsonaro and the PSL relied on corporate “in kind” donations to push out their messages through social media using sophisticated “robo” technology.

How will voters react to the Alliance and the PSL?

Even if Bolsonaro’s Alliance for Brazil is legally registered in time to qualify for this year’s elections, the party will be poorly financed, and the president’s social media strategy will face unprecedented scrutiny for violations of electoral law. Bolsonaro and his allies enjoy a significant plurality of voters but stand on shaky ground as they prepare for the municipal elections. The PSL, meanwhile, sits atop an impressive war chest of campaign resources, but also at a significant political distance from Bolsonaro and his rowdy bandwagon.

The emergent coalition of economic liberals and social conservatives now stands divided just as voters consider whether the mid-term municipal elections should be about local policy issues or a referendum on the president’s performance. So far, the Alliance for Brazil has only contributed to increasing party fragmentation and perplexed the conservative-nationalist rank and file.

It remains to be seen whether or not Bolsonaro can pick up the pieces and build a lasting political organisation once the carnival is over.

Could Brazil's success in tackling intersecting inequalities be a model for the rest of the world? September 19th, 2017 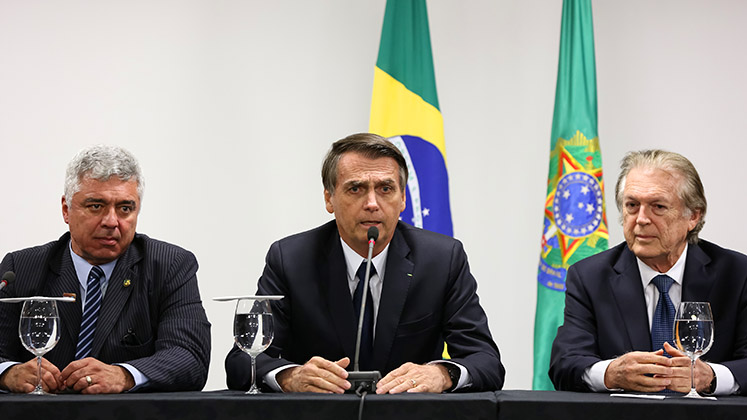 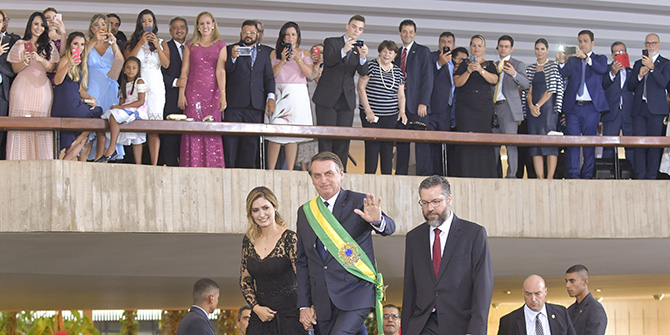