Our new research into the effects of El Salvador’s lockdown shows that those with the lowest incomes and the worst health have been hit the hardest. While many have skipped meals and stopped working, others have even ended treatment for chronic illnesses or taken loans from predatory lenders. These adaptations only make the situation worse, and the state must try to tackle the conditions driving them if the country returns to lockdown, write Mylène Lagarde (LSE Health Policy), Manuel Sánchez Masferrer (ESEN, El Salvador), and Carlos Riumallo Herl (Erasmus University Rotterdam).

During the COVID-19 pandemic, the economic harm created by strict health responses has often been framed as the price to pay to reduce the spread of the virus and avoid the collapse of healthcare systems. In many high-income countries, extraordinary measures have been introduced to protect jobs and livelihoods. But what happens when strict lockdowns are introduced in settings where the welfare state cannot absorb economic shocks and marginalised populations already suffer from poor health?

This is the question we sought to investigate by carrying out a phone survey with more than 1,600 clients of a microfinance organisation in San Salvador, the capital of El Salvador. Our results reveal that the strict lockdown introduced in this country had a very high economic impact amongst informal workers and that this impact was barely mitigated by government support measures. We also show that the crisis is likely to have long-lasting effects, especially on the health of more vulnerable groups.

Understanding the impact of COVID-19 measures in El Salvador

On 21 March 2020, a few days after the country’s first official case of COVID-19 was detected, President Nayib Bukele introduced one of the world’s most stringent lockdowns. Public transport, schools, and all shops were shut down, except for some essential food stores. Apart from those recognised as “essential workers”, everyone had to stay at home, except for shopping at the nearest supermarket or grocery store. The army was deployed at checkpoints and given the authority to place rulebreakers in detention centres.

Initially introduced for 30 days, these measures stayed in place for nearly three months. It was 16 June before some economic activities were once again given the green light, but many shops remained closed until the end of August, by which time the number of daily cases had dropped significantly.

In an attempt to mitigate the economic shock of the lockdown, the government introduced a series of supporting measures. A cash transfer of US$300, meant primarily for workers in the informal sector, was introduced; payments on utility bills and loan instalments were frozen for three months; and 2.7 million food baskets were distributed to needy households.

Between 10 June and 14 July, we interviewed 1,661 microfinance recipients for whom we already had baseline data prior to the pandemic. Most are self‑employed women (84%) that run small, informal businesses (median daily sales of US$35 pre-COVID) in San Salvador or Soyapango, the country’s two largest and most densely populated municipalities. The interviews included questions about the economic impact of the pandemic, access to healthcare and treatments since the start of the lockdown, knowledge of COVID-19, and attitudes towards policies introduced during the crisis.

Just over 80 per cent of respondents reported having to halt their economic activity during the full lockdown (as illustrated in the chart below). This proportion, which is roughly the same across all income levels in the sample, is twice as large as in national level estimates, suggesting that informal workers were hit particularly badly.

Even after restrictions loosened on 16 June, 58 per cent of those surveyed still reported no economic activity for the previous week. Overall, 65 per cent of individuals said their revenues were at least 80 per cent lower than before the pandemic. Even those who were able to work during the lockdown reported revenues on average 43 per cent lower than in normal conditions.

Because this governmental support proved insufficient for many, households resorted to various coping strategies that could contribute to other potentially long-term problems. Roughly a quarter of individuals reported skipping a meal on at least one day of the past week, and almost 60 per cent of those skipped a meal every day in the past week.

Beyond this food insecurity, 10 per cent of individuals had to sell an asset of some kind. Even though 60 per cent of respondents said they were unable to repay their current loan, 30 per cent said they would need to contract a new one. Worse still, about 1 in 4 of these new loans came from predatory lenders that charge high interest rates, putting borrowers at risk of serious consequences further down the line. 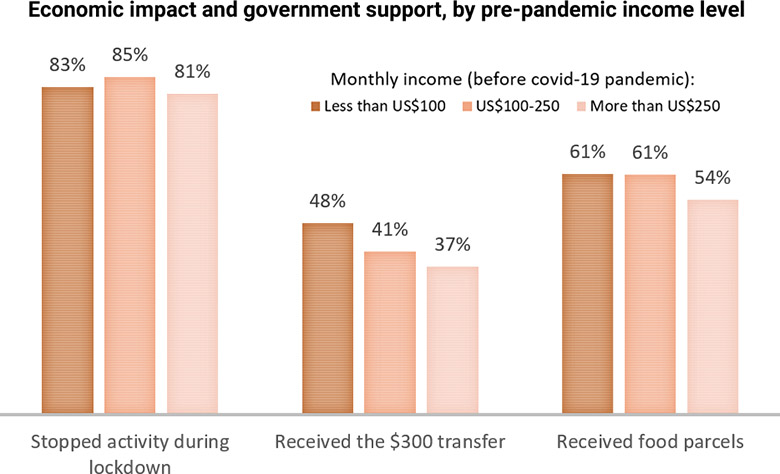 Neither were the consequences of the lockdown limited to the economic sphere. Approximately half of interviewees reported that restrictions under lockdown meant that they did not access health services when they needed to.

Worryingly, those suffering from serious chronic conditions (hypertension, high cholesterol, diabetes, obesity, and heart, liver, or kidney disease) were at a higher risk of foregoing healthcare: 59 per cent failed to seek care when needed during the lockdown, as opposed to 42 per cent of those not diagnosed with any chronic illness (as illustrated below). Furthermore, 19 per cent of respondents with chronic diseases halted an ongoing treatment during lockdown, compared to only 10 per cent amongst those not suffering from a diagnosed condition. Respondents with chronic conditions and aged over 60 were particularly likely to have interrupted a treatment, even though they were at most risk of suffering serious health consequences as a result. 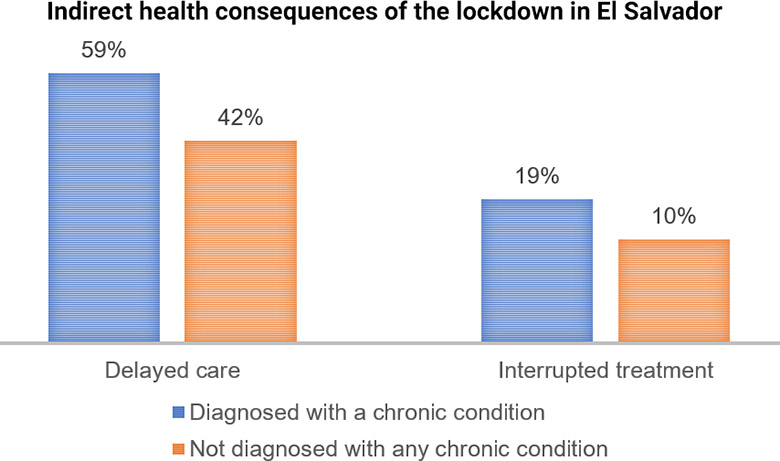 Support for the government’s response

When the Salvadoran government first introduced its draconian measures, some praised its response as an example to emulate. And with less than 800 official deaths due to COVID-19 as of September, El Salvador does indeed have one of the lowest COVID-19 death rates in Latin America.

Although many suggested that the trade-offs between public health measures and the economy (and civil liberties) would prove unacceptable to most citizens, especially in the absence of a strong welfare state, we found that many respondents were willing to accept the significant economic cost of fighting the pandemic at the height of the crisis.

More than 90 per cent of individuals said they were in favour of partial lockdowns that retained some permissions to go out, whereas fully 85 per cent supported even the strictest version that was initially introduced. Amongst this group of small business owners, the least popular measures were the closure of markets (40%) and public transport (62%).

While this overall level of support might seem surprising given the economic and health costs involved, it is consistent with the view amongst 67 per cent of our sample that the epidemic would cause more harm than the economic consequences of halting the economy. These results also echo those of a recent national survey, which showed that a high level of approval persisted for President Bukele’s management of the crisis (8.67 out of 10).

Where next for El Salvador’s COVID response?

As the road to full economic recovery will be long, with new waves of the epidemic likely, El Salvador’s ongoing response to the pandemic should look at measures that better address its direct and indirect consequences.

First, the government should seek to improve the targeting of welfare measures in order to maximise the benefits of the scarce resources at its disposal and protect those with the greatest need. I is vital to take into account that those worst hit in the short-run are also likely to face lasting consequences from natural coping strategies. Selling assets or taking out high-interest loans, for instance, could easily leave these individuals at risk of falling into poverty traps.

Second, future policies should recognise and address the indirect health consequences of the epidemic.  From reduced access to care to interrupted treatments, we found evidence that those suffering from chronic conditions are more likely to have been badly affected by the lockdown. Going forward, communication and outreach strategies could be deployed to prioritise these at-risk populations. This is especially important in El Salvador, where many suffer from “silent” cardiovascular diseases and may not realise the risks involved in foregoing care or interrupting treatment.

Dr Mylène Lagarde is an Associate Professor in Health Economics in the Department of Health Policy at the London School of Economics. Her research looks at how incentives and information can be used to shape providers’ and patients’ behaviours in a range of low- and middle-income countries.

Professor Manuel Sánchez Masferrer is Professor of Economics at Escuela Superior de Economia y Negocios (ESEN) and coordinator of the Centre for Social Progress in El Salvador. His research has focused on measuring poverty and welfare, as well as identifying the determinants of entrepreneurship in developing countries.

Dr Carlos Riumallo Herl is an Assistant Professor in Health Economics at Erasmus School of Economics, Erasmus University Rotterdam. His research focuses on the impact of policies on health and health behaviours in low- and middle-income countries.