Created in 2003 Equus is one of eleven statues donated to the School by Canadian alumnus, Louise Odette, in 2004. Equus was designed by sculptor, Edwina Sandys (b1938) and was cast in bronze by MST Bronze Limited, an art foundry based in Toronto.

Edwina Sandys began working as an artist and sculptor in 1970 with an exhibition of drawings following a varied career as a secretary, newspaper columnist and novelist as well as contemplating standing for parliament – an obvious career choice for someone whose father and grandfather were both Conservative MPs.

Edwina Sandys is the granddaughter of Winston Churchill – her mother Diana Churchill was the eldest daughter of Britain’s war time Prime Minister. In 1935 Diana Churchill married the Conservative politician Duncan Sandys, the Conservative MP for Norwood. Sandys served in Conservative governments into the 1950s finally retiring from Parliament in 1974 and taking the title Baron Duncan-Sandys. Edwina was born in 1938, the second of three children born to the couple. In 1984 she received an MBE for services to British cultural interests in New York.

Other works by Edwina Sandys include Breakthrough unveiled at the National Churchill Museum in Missouri in 1990. The Museum is on the site of Churchill’s famous Sinews of Peace speech in 1946, often cited as marking the start of the Cold War and the sculpture includes eight sections of the Berlin Wall. In 1984 her controversial work Christa, depicting Christ on the cross as a naked woman. The work briefly hung in the Cathedral Church of St John the Divine, New York. 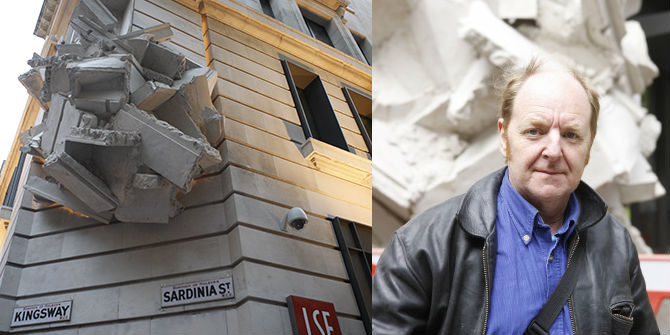