The Department of International Relations: origins and foundations

The Department of International Relations: origins and foundations

The new Department of International Relations at LSE was announced in June 1927 by Director William Beveridge. To mark the department’s 75th anniversary in 2002, Nicholas Sims described the events leading up to the announcement and the early teaching of international relations at LSE.

Between 1923 and 1930 a series of firsts occurred. Professorial Council minutes of 20 March and 18 June 1924 record the decision to advertise the Sir Ernest Cassel Chair of International Relations and the appointment of Philip Noel-Baker for five years from 1 August 1924.

International Relations and International Politics made their first appearance in the Calendar for 1924/25. Philip Noel-Baker’s courses were listed between those of Sir William Beveridge and Harold Laski under the general heading of Politics and Public Administration.

“In accordance with the Memorandum submitted by four of the teachers most directly concerned in International Studies it is proposed to group the work of these teachers and of others in the same field together to form a single co-ordinated ‘Department of International Studies’ with a unity of its own within the School, though in continuous contact with all the rest of the work of the School.

As building development permits, it is hoped to provide accommodation for the teachers most concerned in close connection with one another and with a special department of the Library and attached classrooms.

The Governors should be asked to consider the formation of an Advisory Committee of distinguished persons interested in International Studies.”

Minute 5 continues with the Director’s assurance to Hugh Dalton, the future Chancellor of the Exchequer, “that the Advisory Committee would be drawn up to include both men of academic distinction and distinguished men of practical affairs.” Beveridge announced the new Department in his annual report on Oration Day, 24 June 1927.

International Relations made another significant advance into the LSE curriculum in 1927. A committee chaired by R H Tawney proposed a revision to the BSc (Econ) which LSE had been teaching as its flagship degree ever since the reorganisation which followed the 1898 University of London Act. The Professorial Council accepted the Tawney Report and approved new regulations under which the first students would graduate in 1930. International Law and Relations now appeared in the list of Special Subjects (and would eventually become International Relations alone in 1943).

As early as 1924 Edward Berrington Behrens received the degree of PhD (Economics) for his thesis on “Aspects of International Administration raised in connection with the early development of International Labour Organisation”, then just five years old. In 1927 Noel-Baker was supervising seven research students in the new Department.

Alfred Zimmern had already set the scene before Noel-Baker with The League of Nations at Work, a course of eight lectures which he launched on 12 November 1923:

These lectures, while dealing principally with the aims and achievements of the League, will treat also of the general international situation and of the position which the League can and should occupy in international politics.

This strong emphasis on the League and international institutions was reflected in publications and research. In 1925 Noel-Baker published The Geneva Protocol and in 1926 the first of many books on Disarmament, the lifelong cause for which he would receive the Nobel Peace Prize in 1959.

On 5 November 1928 Don Salvador de Madariaga came to give a lecture on Disarmament, having directed since 1923 the Disarmament Section in the League of Nations Secretariat. By this time economic aspects of International Relations were also beginning to receive attention. New regs for BSc (Econ) for students graduating in 1930, show the new list of Special Subjects including International Law and Relations.

Sir William Beveridge’s support for International Relations is traced through his 1928 announcement of a scholarship for its best student, with the prize of a visit to Geneva. This matched the visit to The Hague attached to the International Law Scholarship. Both would take place in August and would include attendance at academic courses, in the League of Nations Secretariat’s Palais Wilson at Geneva and the Peace Palace at The Hague respectively.

Beveridge’s undated manuscript notes show plans for expansion, if possible in cooperation with the new Institute of International Studies at Geneva (which has been celebrating its own 75th anniversary as IUHEI). He saw LSE as preferable for “prolonged” study of International Relations because “international research concentrated at Geneva might tend to become simply a study of official methods and documents and minds” presumably because of the dominant presence of the League of Nations. 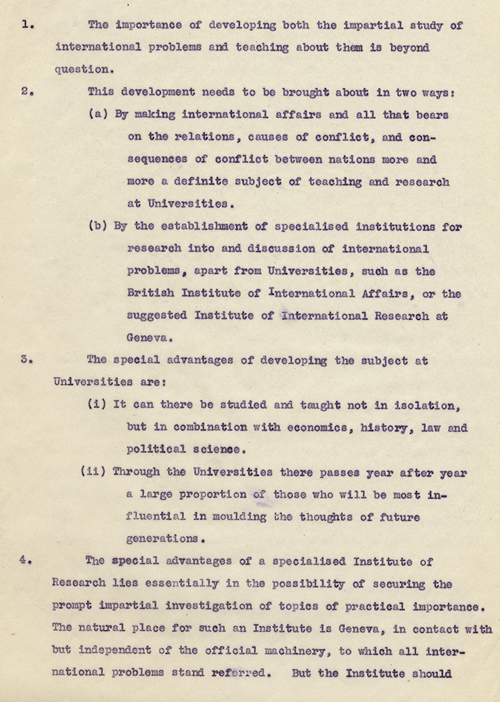 But Beveridge was limited by space constraints. The LSE site was expanding within the angle of Houghton Street and Clare Market, but not as fast as student numbers, which were thought to be at the maximum tolerable. “Regular” students increased by almost 30% from 782 to 1014, in just the four years 1923 to 1927.

The c1927 photograph shows the west side of Houghton Street: the houses awaiting demolition had been acquired so that the School could join up its new (1922) Main Building, seen on the left, with its earlier (1900) site on the corner of Clare Market. The east side of Houghton Street was still occupied by the Holborn Estate Grammar School for Boys, but the East Building which LSE would put up in its place in 1931 was to become the Department’s eventual home for many years up to 1980.

How fast International Relations could grow would depend upon Beveridge’s success in tapping the Laura Spelman Rockefeller Memorial Fund for the building work in Houghton Street.

Beveridge celebrated in his 1926 Oration Day report the “great value” of the Cassel Chair of International Relations. He saw LSE as about to “be equipped to deal with international affairs from all the three angles of law, history and administration.” Writing in 1971, Professor F S Northedge commented:

The last of these three ‘angles’ presumably reflected the general assumption in the 1920s that an international community of states already existed: what remained to be accomplished being to furnish that community with appropriate administrative organs, the most important of which had already been set up in the form of the League of Nations.

1971 also saw Northedge’s vision realised with the launch of Millennium as a learned journal edited and produced by graduate students of the Department. Its own 25th Anniversary conference was the first major event organised in Clement House after its reopening as an LSE building. The Department moved there in September 1996 after sixteen years at the back of the Main Building, in the old W H Smith Memorial Hall vacated by the Library in 1978. Northedge’s Brief History of the Department, which had lain unpublished since 1971, appeared in print for the first time in International Relations at LSE: A History of 75 Years, published by Millennium to celebrate this 75th Anniversary.

The full, original version of this post marking the department’s 75th anniversary in 2002 appears on the LSE International Relations blog.

The Montague Burton Chair in International Relations at LSE and its occupants: a brief history August 4th, 2021 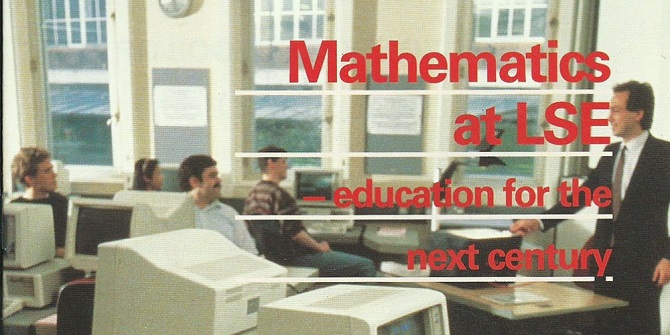 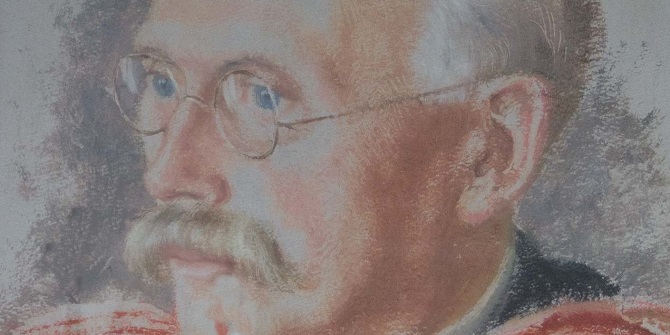 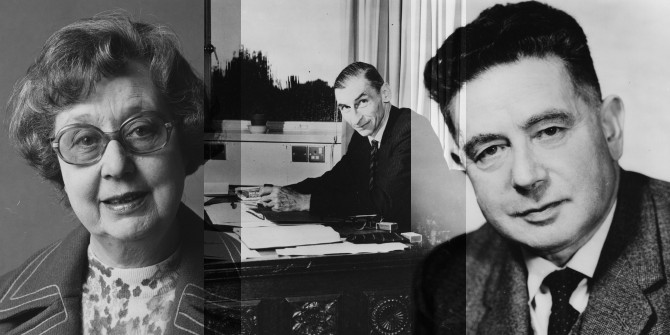