From the 5th to 14th December 2018, I had the honour of participating on a 10-day academic exchange trip to Japan known as the MIRAI program (meaning ‘future’ in Japanese). This government-sponsored exchange is part of the Japanese government’s efforts to strengthen friendship ties between Japan and Europe by fostering mutual understanding and intellectual discourse. I was selected to join the MIRAI program’s ‘Economy and Business’ group, which consisted of 40 European students from 27 countries across the continent. The program participants ranged from final year undergraduates to Master’s/PhD students, which allowed for academic diversity within the cohort and sparked lively debates during our ten days in the Land of the Rising Sun.

Having studied courses on modern East Asian history (HY113 & HY235) and international political economy (IR206) during my degree, I applied for the ‘Economy and Business’ theme, as I hoped it would best compliment my historical interest in Japan’s post-Second World War ‘economic miracle’ and its subsequent economic stagnation. I wanted this trip to equip me with a better understanding of the Japanese business landscape and contemporary economic policy issues by building on my existing knowledge of modern East Asian history. While I was among the few participants whose academic focus was not business or economics, I nonetheless felt I had much to contribute based on my historical understanding of Japan’s economic development.

Employing a Historical Lens on Contemporary Issues in Japan

The study trip involved a well-balanced combination of theme-related lectures, excursions to historical sites, and university visits. For example, we were taken to visit Sophia University, a private Jesuit research university in Tokyo established in 1913. We were able to interact with Japanese students enrolled at Sophia and attended a lecture about the current status of the Japanese labour market held by Professor Minamihashi Naoaki. In short, the lecture detailed the key distinguishing features of the relatively immobile Japanese labour market, including the keiretsu business groups and the country’s famous ‘lifetime employment system,’ in comparison to Europe’s more flexible labour markets. While the Japanese labour market has become increasingly flexible in recent decades as a result of targeted government policies and rising entrepreneurial spirit, the traditional image of the dedicated ‘salaryman’ – one who remains loyal to one corporation throughout their career – still persists and bestows rigidity onto the labour market.

After receiving this background information, we divided into smaller groups where  we debated the possible reasons behind Japan’s distinctive ‘lifetime employment system.’ Many of the aspiring economists in the room, rather uncharacteristically for  their major, argued that the lifetime employment system, maintained by the large keiretsu conglomerates, was predominantly driven by cultural values specific to Japan, such as individuals’ consensus-seeking habits, societal harmony, and a long-term orientation to life. These viewpoints were fascinating to hear from fellow participants since they strongly resembled the arguments put forth by the Nihonjinron school of thought in the 1960s–70s. These scholars argued that the post-war ‘economic miracle,’ facilitated by the economic efficiency and stability of lifetime employment, was mainly enabled by Japan’s unique cultural attributes rather than economic incentives or external considerations such as the Cold War. LSE’s modern East Asia course (HY235) had, however, equipped me  well to counter these arguments by pointing to more historically-grounded dynamics, which likely established lifetime employment in Japan already during the early Meiji period (1868–1912). This counter-argument posits that lifetime employment, and the generous employee benefits associated with this system, emerged as a consequence of Japanese companies seeking to undermine the role of labour foremen in exchange for gaining direct access to labour. These opposing arguments, which were unfamiliar to many, fostered a stimulating debate that continued long after we had left the lecture hall.

Although most of our time was spent in and around Tokyo, we also spent three days in Nagoya, the capital city of the Aichi Prefecture, where we got experience the futuristic-looking Shinkansen bullet train. The first high-speed Shinkansen line was opened in 1964, during the ‘Golden Sixties’ of Japan’s double-digit economic growth, and has been identified as key stimulus of Japan’s post-Second World War economic recovery. It connected the crucial metropolitan centres of Tokyo, Nagoya, and Osaka, which include approximately 60% of Japan’s population and account for about 65% of its GDP. Thereafter, these high-speed trains facilitated Japan’s economic boom by improving transport connectivity across the country, so it was exciting to personally experience travelling on one of them. 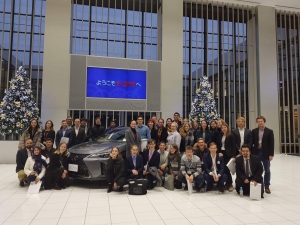 A group picture at the Toyota Kaikan Museum, located near the company’s Tsutsumi plant.

Travelling on the bullet train to Nagoya appropriately set the scene for our visit to Toyota Motor Corporation’s Tsutsumi plant, one of the firm’s several factories located in the Aichi Prefecture. Toyota’s corporate history extends back to prewar Japan, as the firm gradually evolved from being a weaving loom manufacturer into Japan’s leading automotive company, producing its first commercial automobile during the volatile mid-1930s. As highlighted by historian John Dower in his 1990 article titled “The Useful War,” it is interesting to note that, although Japan ultimately suffered as a result of its violent empire-building efforts in the 1930s, the military-driven production boom during the war also established some of the crucial foundations for the country’s post-WW2 growth. As a result of the wartime boom, Toyota, alongside domestic competitors Nissan and Isuzu, prospered and grew rapidly as primary producers of trucks for the imperial military. This growth was strengthened by the fact that new legislation in 1936 forced foreign automotive suppliers, such as Ford and General Motors, out of the Japanese market. This wartime demand for Toyota’s automobiles consequently provided a solid foundation for its global expansion in the post-war period. Even during the 1960s, over 40% of Toyota’s parts suppliers still traced their subcontracting relationship back to the wartime period. These facts remind us how important specific historical conditions might have been in propelling Toyota’s success after the Second World War. Lastly, having studied some business history in my free time, it was also fascinating to witness in-person the operation of the famous just-in-time production system, which Toyota largely developed during the 1960s and 1970s.

Considering the revival of American protectionism under Trump and the shadow of political uncertainty cast by the Brexit chaos, it was also fascinating to hear about current trade affairs and trade negotiations from a Japanese perspective. To facilitate such a discussion, we participated in a trade policy lecture and Q&A at the Japanese Ministry of Foreign Affairs with Professor Shujiro Urata who specializes in international economics at Waseda University.

The HY235 course provided me with a brief insight into post-war Japan’s economic relations, so I knew that Japan’s immense exports into European and American markets from the 1950s onwards created numerous trade conflicts with the US and the EEC until the 1980s. Compared to today, economic exchange between Japan and Europe was far from balanced and instead created extensive trade deficits for the latter. However, the Japan-EC Joint Declaration of 1991 represents a crucial watershed in this context, since thereafter we have witnessed increased EU–Japan cooperation in trade and other issue areas. These late twentieth-century trade disputes therefore stand in stark contrast to present-day cooperation between Japan and the EU, most recently through the EU-Japan trade agreement that entered into force this February.

Our Q&A with Professor Urata also underlined how this new trade agreement between Japan and the EU represents a joint defense against President Trump’s ‘America First’ protectionism by creating the world’s largest free trade zone. More broadly, the agreement bolsters both the EU and Japan’s global influence in a world where the US is retreating from leadership. However, while the economic benefits are clear for both signatories, post-Brexit UK will likely suffer from the agreement, at least until it finalises its own trade deal with Japan. In fact, the lecture intertwined well with our Toyota visit since we could ask the company representatives to comment on how various Brexit outcomes might impact Toyota’s UK manufacturing operations. Many fellow students were later keen to hear some personal thoughts from those of us who studied at British universities. This illustrates just one case of the peer-to-peer learning that took place during the trip as a result of our extremely diverse cohort.

Why should future LSE International History students participate in the program?

I believe the MIRAI program offers an invaluable opportunity for all International History students with an interest in Japan to visit the country and engage with its fascinating culture through a variety of both academic and non-academic activities. Personally, the program allowed me to travel to East Asia for the first time and complimented my academic studies on Japanese history with a real-life understanding of what the country looks like in the twenty-first century. Beyond learning about Japan and your chosen theme of interest, the program also provides a fantastic chance to form new friendships with other like-minded European students. When I travel across Europe on future holidays, I will almost certainly have at least one local friend to invite for lunch or dinner in any country. It is truly amazing how a short 10-day trip can foster such strong bonds of friendship!

I would encourage all interested students in the International History department to apply in future years. The key piece of advice I can give to future applicants from the LSE – regardless of which program theme interests you the most – is to focus on clearly communicating your interest for Japan through, for example, references to relevant university courses, extracurricular activities, or recent news stories that you found particularly interesting. Studying at a world-renowned institution such as the LSE provides a competitive edge in the application, but what matters the most is conveying your personal motivation!

The exchange program is fully funded by the Japanese government, so all suitable university students of European nationality can apply regardless of financial status.

You can find more information about applicant eligibility and program details (for 2018 MIRAI study trips) by visiting the website of the Japanese Embassy in the UK.

Aleksi Lahikainen is a third year student of International Relations and History at the LSE. His studies focus on international political economy and modern East Asian history.