In this article Curtis Large analyses the effect of ‘re-enculturation’ on nations and nationalism. Drawing on the notion of ‘invented traditions’, he explores different ways in which the ‘pizza effect’ can impact ethnic and political communities. He argues that this phenomenon might materialise in several ways, including by fostering ‘hot nationalism’ and solidifying hierarchies.

The Day of the Dead in Mexico City – crowds, floats and masses of ornate dancers fill the streets to the sound of blaring drums and horns. Amidst this spectacle of skulls, one wonders whether anything could be more evocative of the Mexican nation. But we find an issue; Mexico City only hosted its first parade in 2016, borrowing from a scene in the James Bond film released the previous year.[i] Mexico’s antique celebration has been transplanted to the West, conveniently modified, before being reunited with its source in a different form as if it never left. In 1970, Agehananda Bharati coined the playful ‘pizza effect’ to label this phenomenon.[ii] As Sedgwick surmises:

‘Original Italian pizza was a simple dish, consisting of bread with a tomato topping. Taken to America by Italian emigrants, the pizza was developed there into its present more complex form, which after the Second World War spread to Europe–including Italy. The contemporary pizza is now taken to be purely Italian, but it is not.’[iii]

How, as cultural communities, do we interpret our social imaginary once the locus of our national customs, myths and markers is compromised? Since the 1980s, many theories mapping the modernity of nations and nationalism have been tabled, despite their ostensible ‘primordialism’. Perhaps most relevant to the pizza effect is that of ‘invented traditions’, introduced by Eric Hobsbawm and Terence Ranger.[iv] These ‘are responses to novel situations which take the form of reference to old situations, or which establish their own past’ explains Hobsbawm, adding ‘new traditions could be readily grafted on old ones … borrowing from the well-supplied warehouses of official ritual, symbolism and moral exhortation’.[v] We might, then, consider the pizza effect to be one of many explanations behind the invention of traditions. The two examples offered thus far show the plausible benignity of Bharati’s theory, which, in a period of global communications and easy travel, likely accounts for innumerable cross-cultural instances the world over.[vi]

However, the possibility of pizza effect-ed materials being gathered to summon widespread national consciousness–with the capacity to evolve into ‘hot’ nationalism–cannot be ignored. As Hobsbawm argues, the ‘unprecedented’ theme of nationalism prior to the late 18th-century meant ‘that even historic continuity had to be invented’.[vii] In our case, this feasibly gives culturally transplanted phenomena a superficial antiquity, and the loyalty this entails, through ‘semi-fiction … forgery’.[viii] Connectedly, one might draw on Miroslav Hroch’s ‘phases of nationalism’, the first being a mass research of attributes attached to a group in order to promote awareness, identity and collectivisation.[ix] In recognising these concepts, not only can we understand why the pizza effect is conducive to the invention of tradition and the ‘ethnic entrepreneurs’ that encourage it, but also how re-enculturation might eventually contribute towards building more active and developed nationalist movements.

The Kmhmu are an ethnic minority located primarily in Laos. According to Proschan, the collection and proliferation of folktales by external collectors amounts to a pizza effect that strongly shapes their imaginary. These legends take the form of ‘contest tales’ which see the minority lose out to other regional populations.[x] For some, this evidences an ‘“inferiority complex” that the Kmhmu have interiorized’ through the re-enculturation of fictional narratives spread by outsiders;[xi] one story passed in 1984 to a Chinese scholar is typical:

‘…the Kmhmu first offer elephant meat to the Khbit; the Khbit reciprocate with porcupine meat. The Kmhmu, mistaking the porcupine quill for hair, assume that the porcupine must be even larger than the elephant and are aggrieved by the small portion of meat they receive’.[xii]

This instance is intriguing since the pizza effect is not called upon to promote ethnic splendour. Nevertheless, this collective ‘self-deprecatory acceptance of pejorative stereotypes’ fertilises national identity insofar as they are better able to conceptualise ‘their own place in local ethnically-determined socioeconomic hierarchies’.[xiii] Modified feedback of native folklore has allowed the Kmhmu to reflect their unique and binding disadvantage.[xiv] 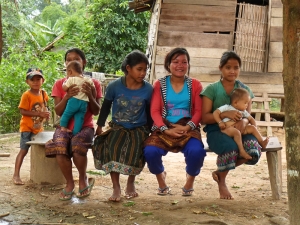 Whereas here re-enculturation has failed to engage an energetic pursuit of self-determination, it did and continues to do so among India’s Hindu nationalists. In 1785, Charles Wilkins produced the first English translation of the Bhagavad Gita (the most widely embraced of the Hindu scriptures), its original Sanskrit being judged similar to Latin and Greek and thus ripe for comparison with European philosophies.[xv] As Britain’s colonial grip tightened throughout the following century, the Gita was subjected to more interpretations, their influence on Indian thought guaranteed by a milieu of imperial socio-economic forces.[xvi] Most influential in this ‘Hindu Renaissance’, however re-encultured, was Edwin Arnold’s “poetic rendering of the Gita”, The Song Celestial (1885).[xvii] A student in London around this time, Mahatma Gandhi described his first reading the text:

‘I devoured the contents from cover to cover and was entranced by it. The last nineteen verses of the second chapter have since been inscribed on the tablet of my heart. They contain for me all knowledge.’[xviii]

Gandhi’s study of the work, in part, inspired his devotion to the tenets of truth and non-violence, combining with the influence of British liberalism to formulate a self-rule movement with a religious flavour. As Larson opines, ‘the Gita … is a kind of nationalist tract, as well as a symbol of universal spirituality’.[xix] This Orientalist pizza effect, that which ‘ha[d] been grist for the mill for nationalism’, did not disappear post-independence.[xx] Even in 2001 re-enculturation was still being employed by influential nationalists. The Vedas, a group of antique Hindu texts attracting Orientalist commentaries, were invoked by the Indian Space Research Organization to justify its scientific recognition of astrology after the works had been historically ‘valued’ by Western intellectuals.[xxi]

So far we have seen how the pizza effect is able to invent traditions and engender vigorous nationalism, and, where it has not, can at least emphasise ethnic particularities. Still, what about supra- or ‘postnationalism’? In 2015, the ‘EU Pizza Effect’ project saw the collaboration of organisations from seven member states to host cookery workshops showcasing their national dishes. Attempting to illustrate the ‘blind acceptance of all things new and foreign’ amongst its constituent nations, the European Union heralded this sponsorship as unlocking ‘active social integration into the European community’.[xxii] Clearly such a commitment will require more than sharing Hungarian stuffed peppers, even if one overlooks the bloc’s interpretation of the pizza effect as diverging from Bharati’s. Conversely, re-enculturation’s transnational capability cannot be dismissed. Existing scholarship on the phenomenon, though rare, has catalogued its profound impact on spiritual movements without delineated territory or national culture, from Buddhism to Wahhabism to New Age Mayanism.[xxiii] Though my piece has attempted to redress this imbalance, the EU might simultaneously learn more from the pizza effect’s borderless potential.

Concluding his book on the topic, Hobsbawm predicted the imminent demise of nations and nationalism: ‘the owl of Minerva which brings wisdom, said Hegel, flies out at dusk’.[xxiv] Implying that our increased understanding foreshadows their end, Hobsbawm’s failure to acknowledge the processes behind his own theory of invented traditions paints the remark as somewhat complacent. Complex matrices of imperialism and continuing globalisation have revealed the pizza effect to be just one of probably many phenomena sustaining this process. As re-enculturation retains its ability to shape collective imaginaries in this way, so also it offers itself to the durability of nations and nationalism.

Curtis Large is an MPhil candidate in Politics and International Studies at the University of Cambridge. His research focuses on nationalism and territoriality, particularly within the context of the European Union (EU). He holds an MA in European Politics from the University of Dundee.

[i] David Agren, ‘Mexico’s Day of the Dead festival rises from the graveyard and into pop culture’. 27 October 2019. Retrieved from The Guardian on 23 October 2020: https://www.theguardian.com/world/2019/oct/27/mexico-day-of-the-dead-festival-mainstream

[iv] This connection has only been made explicitly by Jørn Borup within the specific context of Japanese Zen Buddhism, see: Japanese Rinzai Zen Buddhism: Myōshinji, a living religion (Leiden: Brill, 2008): p. 24; and ‘Zen and the Art of Inventing Orientialism: Buddhism, Religious Studies and Interrelated Networks’ in Peter Antes, Armin W. Geertz and Randi R. Warne (eds.) New Approaches to the Study of Religion (Vol. I). (Berlin: Walter de Gruyter, 2008): p. 477.

[vi] Other seemingly innocuous examples include the export of European fairytales to Hollywood, whose adaptations then become the understanding of European audiences (see Borup, ‘Zen and the Art of Inventing Orientialism’, p. 477) and the popularisation of native books and films in India once they achieve commercial success in the West, usually having initially flopped at home (see Bharati, ‘The Hindu Renaissance and its Apologetic Patterns’, p. 273; and Igor Grbić, ‘“Tagore Syndrome”: A Case Study of the West’s Intercultural (Mis)readings’ in Chhanda Chatterjee (ed.) Literature as History: From Early to Contemporary Times (New Delhi: Primus Books, 2014): p. 6).

[xv] Gerald James Larson, ‘The ‘Bhagavad Gītā’ as Cross-Cultural Process: Toward an Analysis of the Social Locations of a Religious Text’. Journal of the American Academy of Religion, 43(4) (1975): p. 664.

[xvi] These included, among others, ‘the transformation of the Indian economy by market-oriented capitalism, technological innovations like the introduction of railroads, the political unification of India, the establishment of a Western-style educational system, [and] the radical Westernization of Indian intellectuals’, see: Larson, ‘The ‘Bhagavad Gītā’ as Cross-Cultural Process’, p. 665.

[xx] Jukka Jouhki, Imagining the Other: Orientalism and Occidentalism in Tamil-European Relations in South India (Jyväskylä: University of Jyväskylä, 2006): p. 75.

The Strategic Failure of the CCP’s Hong Kong Policy

The Legitimacy of Russia’s Actions in Ukraine