Language and Hegemony in Sri Lanka: Omissions as Ominous Signs?

Language and Hegemony in Sri Lanka: Omissions as Ominous Signs?

In this post Stephanie Nicolle examines the histories of language in Sri Lanka and analyses the implications of the growing presence of Mandarin on public signage in the country. She explores the relationship between language and political power and provides a critique of how language omissions are symptomatic of projects that promote one language.

A signboard at the Attorney General’s (AG) Department in Sri Lanka caused anger over the omission of Tamil, an official language. The AG claimed the missing text was “an inadvertent omission”. Yet the absence of Tamil in a signboard, which faithfully featured Sinhala, English, and Mandarin, was conspicuous.

The Smart Library signboard at the AG’s Department displaying Sinhala, English, and Mandarin texts. The library was funded by China. Author has permission to use image from Colombo Gazette.

Public signs serve various purposes. They serve the practical purpose of conveying information. But they also often serve a political purpose as tools to establish authority. Language choice and placement on signage reflect how powerful groups position themselves in relation to others. For example, after Quebec passed Bill 101 on the Charter of the French Language in 1977, many street signs in the city gave prominence to French. More recently, in Sri Lanka’s Tamil-dominated North, the language hierarchy on a signboard was changed on the orders of a government minister with Sinhala  placed above Tamil.

Consequently, what does the AG’s Department signboard reveal at a glance?  The first two languages have historically been a part of ambitious projects that asserted power over multicultural communities—English under the colonial project, and Sinhala under the Sinhala Only project. These hegemonic projects shared a central feature: they used language as a means to maintain power. Under such projects, excluding other languages was not an “inadvertent omission”, but deliberate.

This article examines how language was key to building hegemonic projects. Under the colonial hegemonic project, English was strategically used to make people adapt to the language preferences of the administration. By contrast, the Sinhala Only project altered the administrative system to suit the language preferences of the majority. This article concludes by examining Mandarin—the third language on the signboard.  It suggests that recent public anger over the signboard stems from experiences under established English and Sinhala hegemonies, and possibly, fears over the rise of another hegemonic project.

English: ‘Long to reign over us’

During debates on Indian education in 1835, Lord Thomas Macaulay asked, “Which language is the best worth knowing?”. In Ceylon, the Colebrooke-Cameron Commission had already arrived at an answer to this question. After unifying the island, the British reflected on the problem of centralising control. The Colebrooke-Cameron reforms proposed English as the solution. Positioning English as the official language offered a convenient way of integrating locals into the colonial administrative system. English was used to assimilate colonial subjects into the administration’s ‘superior’ Western culture. Expanding access to English also assisted the administration’s successful functioning. English education helped supply a bilingual workforce of translators and intermediaries. These workers became vital links between the colonial government and the ‘native’ population.

The hegemonic power of English was such that even post-independence, vehicle license plate signs carried English letters from the name ‘Ceylon’. This practice was later replaced by the Sinhala ‘Sri’ policy. Sign from 1953 (source: Jerry Woody).

English enjoyed a unique position that was denied to other languages. For one, its economic value was unmatched. As described in J.B. Cull’s education reports (1901), English became “practically the only avenue to remunerative employment of any kind”. Multi-ethnic groups could access English, provided they could afford English education or receive state patronage. But those with such access or patronage remained an elite few.

The language hierarchy that emerged assigned little value to Sinhala and Tamil. Under the colonial hegemonic project, English became the “language best worth knowing” as it was the gatekeeper of economic progress, cultural capital, and political control. Unsurprisingly, dethroning English became a crucial goal in campaigns for self-rule.

Sinhala Only: One nation, one tongue

Many Sinhalese resisted colonial hegemony and its beneficiaries. English was resisted as a ‘foreign’ tongue that prevented the recognition of Sinhalese language and culture, political participation, and upward mobility. Part of this resistance was driven by the belief that colonial policy had disproportionately favoured Tamils. In 1946, Tamils were 11% of the population and held 33% of civil service and 40% of judicial service posts. 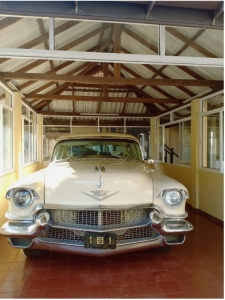 UNP politician Sir John Kotelawala’s ‘1 Sri 1’ Cadillac, the first vehicle to carry the Sinhala ‘Sri’ text. The numbering system became mandatory for all vehicles in the late 1950s. Tamils protested against this policy. Author has permission to use image from Himal Kotelawala.

S.W.R.D. Bandaranaike’s 1956 Sinhala Only policy offered the Sinhalese a promise—correction and compensation for colonial wrongs. By changing the language of administration, the Sinhala Only project reimagined a state system that was favourable for a majority that was once unjustly marginalised. Positioning Sinhala as the sole official language signified concerted efforts to restore value and power to the Sinhalese identity and people. Knowing Sinhala opened avenues to securing coveted positions in the state bureaucracy. Other policies that followed—such as mandating the Sinhala ‘Sri’ text on vehicle number plates—strengthened the link between the state and the Sinhalese.

Sinhala Only emerged mainly as a response to the linguistic and class-based hegemony of English.  Yet the ethno-linguistic hegemony it proposed branched into a rivalry with Tamil. Twenty years after Sinhala Only was first introduced, the TULF (a collective of Tamil political parties) accused the Sinhalese State of making the “Tamils a slave nation ruled by the new colonial master”. Anti-Tamil riots, allegations of state-sponsored Sinhala settlements in Tamil homelands, and discriminatory education policies led to calls for a separate Tamil state.  The cost Sri Lanka bore for pursuing a hegemonic project was a nearly 30-year armed conflict. To date, Sinhala continues to enjoy state patronage—although Tamil was eventually recognised as an official language. The omission of Tamil in the signboard at the AG’s Department evokes this history of exclusion and discrimination.

A third language was inscribed on the initial signboard at the AG’s Department—Mandarin. The Chinese Embassy justified including Mandarin as a “kind gesture” towards China for funding the Smart Library. But public pushback against Mandarin, ranging from mockery and suspicion to anger, has focused on a specific set of concerns.

China’s economic prowess and regional influence position it as a hegemony.  Yet China has declared that it “will never seek hegemony, expansion or a sphere of influence”. Cynicism with regard to China’s ambitions at an international level has prompted greater scrutiny of its actions. Suspicions were raised over China’s 540+ Confucius Institutes for language and cultural promotion abroad. Human Rights Watch warned that these institutions were “extensions of the Chinese government” and threatened certain freedoms.

In Sri Lanka too, China’s growing presence has attracted attention. The Colombo Port City is among many large-scale projects with Chinese financial backing. Along with China’s increasing economic footprint in the country, insecurities have surfaced over Sri Lanka becoming a “Chinese colony”. However, the centrality of Mandarin to Chinese ambitions is unknown at this juncture. Other photos of signs with Mandarin text in place of Tamil are being circulated after the incident at the AG’s Department. From signs in public spaces to food packaging labels, these photos signal public discomfort with Mandarin and the global power it represents. 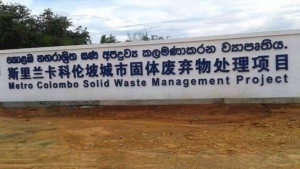 Signboard at a Chinese project site in Sri Lanka with Sinhala, Mandarin, and English texts featured on MENAFN. In 2018, the government stated that action was being initiated against signs that violate local language laws. Author has permission to use image from Colombo Gazette.

A signboard at the China-backed Colombo Port City with Sinhala, English, and Mandarin texts. The photo went viral in 2021, despite the signboard being removed in 2020. Author has permission to use image from Colombo Gazette.

In the case of English and Sinhala, it is evident that language was a vehicle to establishing hegemony. While English adapted people to the language preferred by the system, Sinhala Only changed the system to adapt to the majority’s preferences. In China’s case, it has already established itself as a global power with economic interest in Sri Lanka. Resistance of its language in public spaces, as mainly seen on social media, are telling signs that Sri Lankans are cautious of this new hegemonic force, and the potential role that Mandarin may play in years to come.

Stephanie Nicolle is a Research Analyst from Sri Lanka. Her research focuses on ethno-religious conflict, memory and narrative, gender and peacebuilding, and postcolonial discourse. She graduated from the University of Colombo with a BA (Hons.) in English and minors in International Relations and Sociology.

Intelligence as a Diplomatic Tool: An Israeli History

The Disuniting Kingdom? Looking at the Meaning of the Nation in a Climactic Year

In Plain Sight: Black Lives Matter and Italy’s Colonial Past