Like language, a political culture is in constant flux; meanings continuously change and attitudes are refined through the continuous exchange of ideas. Jeffrey C. Goldfarb argues that this constant reinvention of political culture produces societal transformation, but Joel Suss concludes that although an attractive argument, the author does not provide readers with enough evidence for it to be convincing. 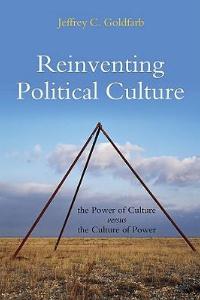 Political culture can be a formidable constraint in realizing social transformation. Ingrained and inherited beliefs inspire conformity with the status quo, visible in the continuing public vitriol against gay rights in the United States, always in reference to an ‘American way of life’ and a ‘glorious past’ that is being irrevocably altered.

But political culture also has a powerfully creative capacity that can produce profound and progressive change in society. In Reinventing Political Culture, Jeffrey C. Goldfarb asserts that political culture is substantive in societal transformation. The constant reinvention of political culture produces social change, as the “power of culture confronts the culture of power”. The author explores the creative capacity of political cultures through what he terms the “politics of small things”; demonstrating how the discussions that take place between people on the micro-scale and outside of formal political institutions effect progressive change. The aggregate of all these interactions constitutes new political ideas that have real power and provides the evolution of societies.

In attempting to back up this attractive argument, Goldfarb examines three cases in which he claims the creative force inlaid in political culture has proved transformational; firstly, the emergence of a relatively free and democratic Poland after the fall of the Iron Curtain; secondly, the new politics and racial discourse in the U.S. brought to the fore by President Obama; and thirdly, the emergence of alternative sources of discussion on both sides of the Israeli-Palestinian conflict in the Middle East. While Goldfarb’s underlying argument is appealing, the examples used to substantiate his claim are not. Unfortunately, each of the examples is peppered all too frequently with personal anecdotes, superficial analysis and sweeping generalizations which do a disservice to the argument presented.

In the case of Poland, the author argues that the success of apolitical theatre companies during the Soviet era helped pave the way for the reinvention of that political culture. Soviet totalitarianism pervaded the former bloc countries, requiring the sanctioning of all public and cultural output by official ideology. Thus, Goldfarb asserts, the reinvention necessarily took place outside of politics, subverting communist rule not by taking an overt political stance but by developing independent spaces of cultural interaction.

The author’s almost exclusive focus on theatre companies as demonstrative of larger, more dynamic processes only scratches the surface, skimming the underlying reinvention and political dynamics at play. Goldfarb devotes much of this section to relating his personal experiences in Poland and name dropping intellectuals he was fortunate to meet, often in a manner that seems aimed at page-filling. His use of this example is symptomatic of the problems that plague the entire book: his use of evidence is largely representative of his own understanding of the political processes at play. Certainly it is difficult to evaluate a society-wide transformation in all its intricacies, but the argument would be better served by the author delving deeper in to the underlying reinvention of political culture rather than relying on largely anecdotal and superficial evidence.

Next, Goldfarb turns to the United States, purporting that the election of President Obama signifies a beachhead in the cultural reinvention of the U.S. A new dialogue about race and economic inclusiveness is taking form, challenging the traditional political leanings of that society. However, this revolution is faced with a formidable, reactionary counter-revolution represented by the Tea Party and the like who associate with the culture of power and are vehemently opposed to change.

With this example, the author drastically oversimplifies the political dynamics at work. As a professed champion of Obama, having volunteered for his election campaign, Goldfarb fails to remark that Obama’s ideas on the economy are not new in the context of American political discourse. Rather, they have been around since the days of Roosevelt’s New Deal. Thus, to understand the election of Obama as the start of the reinvention of American political culture is hardly convincing. Goldfarb here seems like a contortionist, painfully trying to fit this example around his argument.

In the Middle East, the ingrained and mutually incompatible narratives of Israelis and Palestinians make compromise a far-off dream. In the seemingly endless conflict of two nations over one land, Goldfarb argues that new avenues of cooperation are being created across the divide, providing hope for the reinvention of political culture in the most hostile of settings.  These green shoots in an otherwise barren desert are not materializing out of political agreement, but are rather growing from a shared desire for change, creating a new political culture, a new space for dialogue and understanding, where peace is indeed possible. In this case, Goldfarb lets his personal feelings cloud reality once again. He wishes for peace, as most of us do, but exaggerates the potential for progress.

Overall, the main idea in this book is attractive but the author does not provide it with full justice, ironically failing to inspire in the way he urges that intellectuals must. Goldfarb ends up falling prey to some of the same issues he warns against.

This review was first published on the LSE British Politics and Policy blog on 12th February 2012.