Media and Terrorism: Global Perspectives is an insightful addition to the discussion about how we define legitimate and illegitimate targets in war, and what part the media has played in both the public and policy makers’ ideas about these decisions. Reviewed by Kate Saffin. 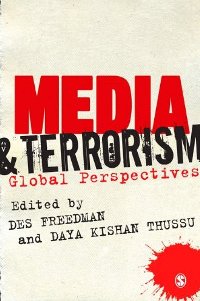 Media and Terrorism examines how media of many forms disseminates information about wars, most recently and markedly about the ‘War on Terror’, and how in the self-feeding loop of politics, power and media, the channels that the media operates through not only make the media an information sharer, but a developing key player that can shape and alter the actual lived realities of war.

The book is edited by Des Freedman and Daya Kishan Thussu, editors of the Sage journal Global Media and Communication, and have previously come together to edit War and the Media: Reporting Conflict 24/7. In Media and Terrorism, the work of 24 contributors with backgrounds ranging from mainstream journalism and blogging to the academic studies of media and conflict studies, has been collected to present an extremely intricate picture of this important topic.

The first part of the book describes the historical and political context of the relationship between media and terrorism, from both Arab and Western perspectives. A great chapter by Lena Jayyusi from Zayed University in the United Arab Emirates references Samuel Huntingdon’s “Clash of civilisations” thesis from the mid-90s as a relatively recent example of long standing colonial ideas and projects that go back as far as the Crusades. Jayyusi points out that the created threat to Western civilisation is seen as much closer now in part due to globalisation, leading to over-reactive and disproportionate recent bans on Muslim women’s burqa and niqab most notably in France in 2009, and the ban on minarets in Switzerland. Jayyusi goes on to point out how successful the civic, military and media infrastructures of the West have been in instilling fear of Islamist-instigated terrorism, given that in 2009 there were less than 300 terror attacks in mainland Europe and only one was by an Islamist group, and yet Islamist terrorism is still perceived to be the biggest threat to Europe’s member states. Jayyusi feels passionately that “‘terror’ is a label used by the powerful to justify their own actions and de-legitimize the response”. She goes on to describe how she sees the media as complicit in creating amnesia about where much of the blame lies for the ongoing suffering in many parts of the Middle East, and she makes the important point of how the position of women in Islamic countries, so often cited as a crucial test of a country’s civilisation and a valid reason for the West’s involvement in them, only regresses and is currently worse in the environment of escalating violence.

Media and Terrorism then takes us through the role of information technology, and how networked technologies have been incorporated in to the structures of capitalism and contemporary warfare. Interestingly, contemporary capitalism is defined as new imperialism by tweeking Lenin’s classic five characteristics of imperialism, with the global dimension of capital and the enabling element of IT and the direct effect on warfare at its heart.

The use of the social media and its ability to give voice to the struggle of a range of actors not previously heard, as well as the ability of this form of soft power to counteract terrorism and reach out to a public that in some circumstances can support and supply terrorism, is covered in a few interesting case studies. Aymen al- Zawahiri’s online open meeting for Al Qaeda in 2008, in which he fielded questions from the public, and the British and American reports and responses to it are examined. Focus is also given to the international Sesame Street programmes which target young children in challenged communities such as Palestine, Israel and Kosovo, aiming to make ‘other’ children more humanised and showing how individuals can work together to solve problems without resorting to violence.

The reinforcement of Islamic stereotypes via popular culture, video games and films is familiar to most people, but by drawing attention to specific examples of the practice the authors have shed new light on to the extent and military interplay of the practice. The military and entertainment businesses co-exist through gaming and defence projects often involving substantial grants to University departments. For example, large gaming companies such as Quantum 3-D conduct half their business with the private sector and half with the Pentagon, and in 2004 the Fox news website showed real time link ups to US soldiers prowling the streets of Baghdad next to advertisements for a Kuma war game which was sponsoring the ‘War on Terror’ through such missions as ‘Battle in Sadr City’. The Kuma war games use real soldiers’ stories and recollections in them that people are invited to relive, and simultaneously act as a recruitment tool for the actual military. The authors go on to examine a number of films from the last decade such as Spy Game, Charlie Wilson’s War, and Green Zone, concluding that the US’s familiar and old enemies are represented repeatedly and that histories are re- written to favour and reconstruct the work of the CIA.

The last two chapters of the book are written by journalists who give a heartfelt cry from the front line. They describe the disinformation, deception and distortion by military sources and news outlets, as well as the systemic failure inside the US media to act independently. Outlets commonly court favours and attention from the military–political axis of power, giving failing support to the never ending war on terror.

Although a lot of the book emphasises the one sided nature of much media communication and how counter- productive it can be, there are points in the book, for example where social media is discussed, where the narrative does seem to fall back to an Anglo- American perspective and it can feel a bit paternalistic and short- sighted. Although this is a natural problem when there are many different authors, more collaboration on actual topics between authors from different regions may have led to more insights and a deeper discussion in some areas.

Overall though the book is well balanced and lively as well as thoughtful and is excellent reading for students, policy makers and the general public alike.

Posted In: Africa and the Middle East | Britain and Ireland | Media Studies | Politics | USA and Canada 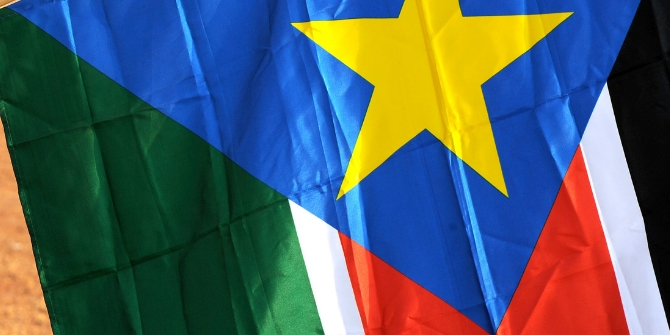