Treat academic writing not as a set of inviolable rules but as a series of stylistic choices, writes Helen Sword, who has found that a conversational yet authoritative tone coupled with attention-getting titles, compelling openings, anecdotes and illustrations is the key to accessible, interesting academic work.

Several years ago I sent out an email to colleagues in which I asked two questions: What is ‘stylish academic writing’, and who are the most stylish writers in your field? Within days, responses had pinged into my inbox from across the disciplines and around the globe. Stylish academic writers, my colleagues told me, convey complex ideas in lively, well-crafted prose that engages readers, tells stories, expresses conviction, employs concrete examples and avoids gratuitous jargon. There were some disciplinary nuances, of course; for example, literary scholars value linguistic playfulness, whereas scientists favour precision and concision. All the same, I was struck by the overall consistency of the responses, which echo the advice found in most guides to effective writing but do not, sadly, reflect the turgid realities of scholarly publishing.

To measure the breadth of the gap between what academics say good writing is and what they actually produce and publish, I undertook a stylistic analysis of 1,000 peer-reviewed articles from across the sciences, social sciences and humanities: 100 articles each from journals in the fields of medicine, evolutionary biology, computer science, higher education, psychology, anthropology, law, philosophy, history, and literary studies. Some of the questions I posed were purely quantitative: for example, how many of the articles in each discipline included the personal pronouns I or we?  (See Figure 1): 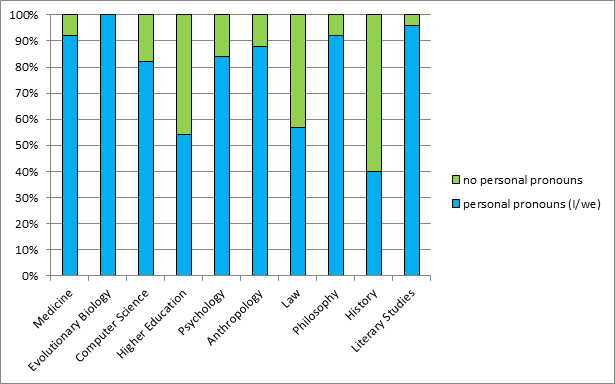 How many articles employed unusually high or low percentages of nominalizations, those long-winded abstract nouns so beloved by academic writers? (See Figure 2): 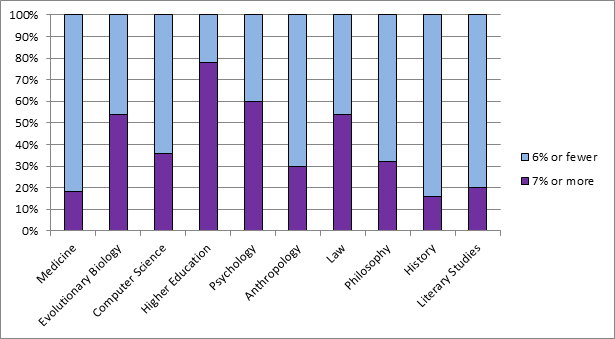 Figure 2: Relative percentages of nominalizations (abstract nouns ending with suffixes such as –tion, -ness or -ism) occurring within the first 1,000 words of articles from ten different disciplines (n=500, 50 articles per discipline)

Other queries were more subjective. What percentage of articles in each discipline contained titles that could be classified as engaging, informative or both?  (See Figure 3): 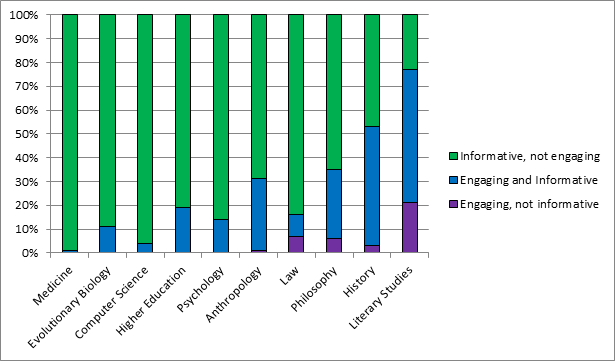 How many articles started with a story, question, quote or other opening hook?  (See Figure 4): 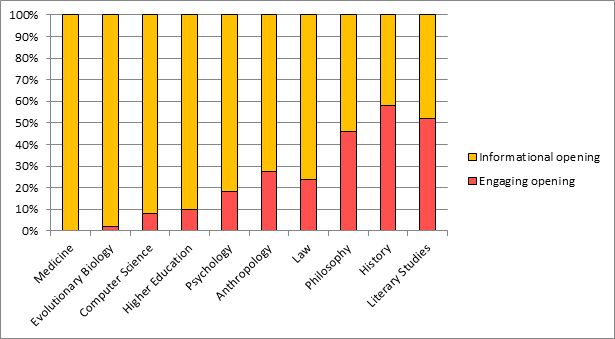 Most of the disciplinary differences identified in my analysis were fairly predictable: for example, literary scholars tend to write engaging titles, medical researchers don’t; historians employ lots of opening hooks; evolutionary biologists don’t. Other results, however, proved more surprising: who would have guessed that historians use far fewer personal pronouns than computer scientists do, or that higher education researchers employ more abstract nouns than philosophers do?

Amongst all the disciplinary variety, one common feature emerged: wherever I looked in my data sample, in one peer-reviewed journal after another, I found examples of the kinds of abstract, convoluted, jargon-ridden sentences that befuddle readers, kill innocent trees and expose academics to public ridicule.  Literary scholars write them:

Unlike the consuming woman’s relationship with the fashion doll and, by extension, the experience of novel reading, identifying with the automaton derives from and creates a thwarted, rather than expanded image of self.

Rarely is there an effective conceptual link between the current understandings of the centrality of text to knowledge production and student learning and the pragmatic problems of policy imperatives in the name of efficiency and capacity-building.

The conspicuous interspecific variability of the mammalian penis has long been of value as a taxonomic tool (e.g., Hooper and Musser 1964a, 1964b), though as in other animal groups the selective pressures underlying such genitalic diversity have not been well understood.

Indeed, who but an academic could turn penis size into the most boring topic on earth?

Fortunately, I also discovered some bright lights in the gloom: examples of academic writers who produce stylish prose, and damn the torpedoes.  In my new book, Stylish Academic Writing, I showcase the work of distinguished researchers who bring to their academic writing passion (anthropologist Ruth Behar, literary scholar Selina Tusitala Marsh), humour (psychologist Michael Corballis, legal scholar Peter Goodrich), personality (computer scientist Philip Wadler, physicist Nathaniel Mermin), playfulness (cognitive scientist Douglas Hofstadter, management scholars Christopher Grey and Amanda Sinclair), lyricism (biologist Julian Vincent, historian John Heilbron) and other qualities that conventional academics shun but that most readers crave.  These skillful stylists engage with their audiences by deploying transferable techniques that any writer can master: attention-getting titles, compelling openings, case studies, anecdotes, illustrations, examples, stories. They write in a conversational yet authoritative voice, couching their arguments in carefully-crafted prose that is verb-driven, concrete and clutter-free.  Most importantly of all, they treat academic writing not as a set of inviolable rules but as a series of stylistic choices.

My current research moves beyond words on the page to explore the human side of academic endeavor, looking at the behaviours, attitudes and personal circumstances that enable or inhibit successful writing. Through my work I hope to lay to rest the widespread myth – one I have heard again and again, especially from early-career colleagues – that academics who produce anything other than ‘safe’, impersonal prose are doomed to be discounted or rejected by their peers.  In the in-depth interviews that I have conducted thus far with successful academics across a wide range of disciplines and from countries including Australia, Canada, Finland, Malaysia, New Zealand, South Africa, Sweden, the U.S. and the U.K., I have heard stories of intellectual passions indulged, disciplinary conventions subverted and academic risk-taking rewarded.  Yes, it’s true: the road to scholarly success is paved with stylish writing.

To find out whether your own writing is ‘flabby or fit’, visit Helen Sword’s WritersDiet Test at www.writersdiet.com; for best results, bring along a sense of humour and a large grain of salt!

This article was originally published on the LSE Impact of Social Sciences blog.

Helen Sword is an Associate Professor in the Centre for Academic Development at the University of Auckland in New Zealand. She has published widely on modernist literature, higher education pedagogy, academic writing and digital poetry.  Her new book, Stylish Academic Writing, is published by Harvard University Press.

Feature Essay: The books that inspired Sumantra Bose: “Fanon’s The Wretched of the Earth touched a chord with both my national and personal background”