Simon Griffiths is a Lecturer in Politics at Goldsmiths, University of London and Visiting Research Fellow at the Centre for Political Ideologies in Oxford. He was formerly Senior Policy Advisor at the British Academy and a Senior Research Fellow at the Social Market Foundation. Simon discusses George Orwell’s The Road to Wigan Pier – a book he found both engaging and at the same time, flawed.

Phrases and images from George Orwell’s tale of working class life in 1930s Northern England have stayed with me since I first read The Road to Wigan Pier over twenty years ago. Orwell’s account is by turns deeply affecting and funny. I have rarely been on a train journey without thinking of his description, as his train pulled out of a town, of a young woman kneeling on flagstones in the snow trying to unblock a drain outside. She is “twenty-five and looks forty, thanks to miscarriages and drudgery” and her face “wore, for the second in which I saw it, the most desolate, hopeless expression I have ever seen”. By contrast, his description of the room he shared with three other lodgers, smelling like a ferret’s cage, still makes me smile. For several reasons, I still find Orwell’s book both fascinating and deeply problematic. 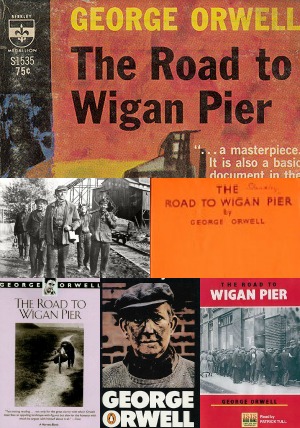 First, books like Orwell’s The Road to Wigan Pier and Priestley’s English Journey (1934) shed light on the iniquities of the world. My intuition that there was a world in which injustices should be fought was strengthened by books like Orwell’s Homage to Catalonia (1938), and Laurie Lee’s As I Walked Out One Midsummer Summer Morning (1969). The latter recounting the author’s departure from a small village in Gloucestershire, near where I was brought up, to eventually fight in the Spanish Civil War. These books, in different ways, are autobiographical narratives about the discovery and fight against injustice. More recently, this kind of book has come in for criticism, because it also provides a kind of class or cultural tourism, using the troubles of others to validate the author’s own experience.

Second, The Road to Wigan Pier provided a way of talking about politics that still seems relevant to me. Orwell wrote that one of the reasons for writing was ‘to push the world in a certain direction, to alter other people’s idea of the kind of society that they should strive after’ and ‘to make political writing into an art’. In The Road to Wigan Pier Orwell wants to turn his reader’s head, to refocus their attention on aspects of the world that they’d previously neglected. If Orwell’s work was an attempt to turn our heads to injustice that would otherwise have been ignored, many of my academic memories of studying politics at Oxford in the mid-1990s were less inspiring. Politics seemed to me to be largely reduced to analytic debates between political philosophers, which seemed far removed from the real world. It was only afterwards, doing a Masters and doctorate at LSE, supervised by Rodney Barker, that I found a way of talking about politics that recognised the historical contingency of ideas and found space for less abstract approaches.

Later I came across writers who had a more developed view of the links between politics, art and literature. Martha Nussbaum, for example, argued that imaginative literature could contribute to the ethical enquiry about ‘how a human being should live’. It could give us an appreciation of the non-commensurability of values, a better understanding of the role and value of emotions, and an acknowledgement of the place of contingency and uncertainty in our lives. Another political philosopher, Richard Rorty, argued that the kinds of work that Orwell produced – journalism and novels – are central in the process of creating solidarity between humans: “coming to see human beings as ‘one of us’ rather than as ‘one of them’”. In The Road to Wigan Pier, Rorty argued, Orwell helps us to understand the cruelties imposed on others.

Finally, in the second half of The Road to Wigan Pier, Orwell provided an account of democratic socialism, based on the decency of ordinary working class people. I found this optimistic view attractive. Stephen Ingle wrote: “Orwell believed that he had discovered, amongst the better off working class, the secret of the good life”. Yet, the more I thought about it, the more I found Orwell’s argument problematic. In The Road to Wigan Pier, he asks why ordinary people are not interested in socialism, noting that, “One sometimes gets the impression that the mere words ‘Socialism’ and ‘Communism’ draw towards them with magnetic force every fruit-juice drinker, nudist, sandal-wearer, sex-maniac, Quaker, ‘Nature Cure’ Quack, Pacifist, and feminist in England”. Orwell doesn’t have much time for people who challenge his description of the working class family on which he basis his ideology. He was dismissive of feminists and any other groups that are uncomfortable, stifled or excluded from the picture he draws.

Orwell’s work isn’t always directly relevant to what I write about now, but it raises questions that still preoccupy me: Why do we write? How should we talk about politics? What problems do people face and what solutions are available?

Simon Griffiths is a Lecturer in Politics at Goldsmiths, University of London. He has worked in a variety of positions in think tanks and public policy. His academic work focuses on party politics and ideology, debates about the market, and public service reform. He Tweets @spgriffiths