This book examines how postwar thinkers from both sides of the Atlantic considered urban landscapes radically changed by the political and physical realities of sprawl, urban decay, and urban renewal. With a sweep that encompasses London and Berlin, among others, Christopher Klemek traces changing responses to the challenging issues that most affected day-to-day life in the world’s cities. David Madden finds that The Transatlantic Collapse of Urban Renewal is a well-crafted and informative guide to a crucial period in urban history. 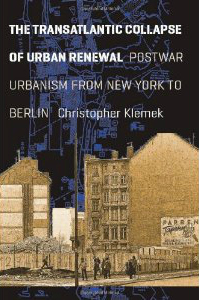 More than forty years after Robert Moses relinquished control over New York’s planning apparatus, and more than fifty years after the Congrès internationaux d’architecture moderne (CIAM) was disbanded, urban renewal continues to occupy a central place in debates about metropolitan life. For the most part, urban renewal—in its mid-twentieth century, bureaucratic-modernist incarnation—is reviled. Its major critic has become the patron saint of today’s urban development establishment. But the most common narratives about urban renewal turn this complex phenomenon, which had multiple genealogies and contradictory legacies, into a simplistic tale about the supposed evils of modernism or government run amok.

Christopher Klemek’s new book The Transatlantic Collapse of Urban Renewal: Postwar urbanism from New York to Berlin is an ambitious work of scholarship that seeks to make sense of this contentious period in urban history. Klemek’s story is focused on what he calls the “urban renewal order.” This is his term for the alliance of planners, policymakers, architects, designers, theorists and many others who sought to remake the urban fabric of the metropolises of North America and Western Europe during much of the twentieth century. Even as this coalition took different forms and led to a variety of diverse outcomes in cities such as West Berlin, London, New York, Philadelphia, Boston and Toronto, Klemek argues that urban renewal policies in all of these places “were remarkably similar.”

The urban renewal coalition was, from the start, transnational, transdisciplinary and politically ambiguous. Its various parts were united in their commitments to architectural modernism, to a rationalistic narrative of progress and to liberal reformism of a particularly technocratic variety. It did occasionally articulate more radical positions. But for the most part, urban renewal did not venture to challenge the structures of postwar Fordist capitalism that spawned it.

From the 1920s until the 1960s, Klemek argues, the urban renewal order became a “formidable juggernaut.” Some projects, like Berlin’s early Hufeisensiedlung, were striking examples of social-democratic cityscapes. Other developments, like Toronto’s Regent Park, provided badly needed modern housing but were later criticized for breaking sharply with traditional urban morphologies. In some cases, most famously Boston’s West End, entire districts were razed and rebuilt to make way for “slum clearance” or new highways. While some projects had a democratizing mission, Klemek notes that, especially in the United States, it was a “depoliticized—or perhaps even conservatively repoliticized” version of modernist urbanism that became dominant.

Though it generated critics from the beginning, Klemek sees the renewal consensus unraveling from the 1950s through the 1980s. The renewal coalition faced attacks from scholarly critics like Herb Gans, from the growing trend towards historic preservation, from iconoclastic modernists like Alison and Peter Smithson and from neoconservatives like James Q. Wilson, Edward Banfield and Daniel Patrick Moynihan. Klemek also traces the demise of urban renewal to what he calls “New Left urbanism,” a movement which he links to figures like Paul Davidoff, Denise Scott Brown, Theodore Roszak and especially Jane Jacobs, all of whom argued and organized against renewal schemes while seeking a different relationship between city dwellers, architects and planners.

The book provides a valuable account of urban renewal as a transnational phenomenon. It offers a skillful comparative analysis of renewal regimes in different contexts, showing how, for example, Toronto and Berlin ended up with very different outcomes than New York and Boston. Klemek is particularly strong in chronicling the interactions between design professionals and social scientists. He notes, for example, that Le Corbusier sought to give honorary membership in CIAM to the sociologist Louis Wirth for “his conceptual contributions to their struggle.”

But in focusing on the “professional and local political cultures” of postwar cities, the book foregoes the opportunity to provide a deeper political and economic analysis of urban renewal and its contradictions. We could have heard more, for example, about larger processes that were decisive in shaping renewal politics, such the overall restructuring of the welfare state or the changing fortunes of organized labor within these cities. The book says very little about the role of private real estate developers in shaping the urban agenda. And we hear almost nothing from the working class and poor urbanites who were the imagined public for many renewal plans.

The book also raises, but doesn’t adequately develop, important questions about urban renewal and housing. Klemek does note that urban renewal in cities like New York and London created islands of public housing that now stand as some of the only affordable housing in central areas. And he also recognizes that campaigns against urban renewal of the sort led by Jane Jacobs in New York’s West Village tended to depend upon, and facilitate, gentrification. But the book doesn’t fully grapple with these insights. A more critical analysis of housing, the state and urban space could have helped to integrate these observations into the book’s main argument.

Overall, though, The Transatlantic Collapse of Urban Renewal is a well-crafted and informative guide to a crucial period in urban history. Today, when new interfaces between local government, urban design and urban science are being developed, this saga has great contemporary relevance. By charting the major trajectories of last century’s urban renewal, Klemek’s study can help us better understand this century’s emerging practices.

David Madden is a Lecturer in the Department of Sociology at the London School of Economics. He also teaches in the LSE’s Cities Programme. His research examines urbanism and politics from ethnographic, historical and theoretical perspectives. He can be found on Twitter @davidjmadden. Read reviews by David.

Posted In: Contributions from LSE Staff and Students | Europe and Neighbourhoods | Urban Studies | USA and Canada