M. V. Lee Badgett is Professor of Economics and Director of the Center for Public Policy and Administration at the University of Massachusetts Amherst; and Research Director of the Williams Institute for Sexual Orientation and Gender Identity Law and Public Policy at UCLA. In 2008, she was named as one of the twenty most powerful lesbians in academia. Ahead of her public lecture at the LSE, Lee talks us through the books that have inspired her throughout her life. 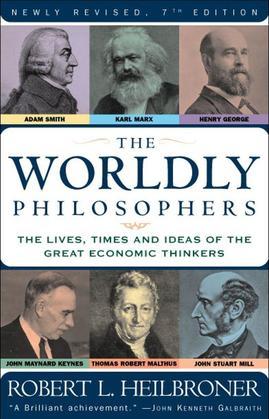 Particular books have paved the path of my career in important ways, even though I’m an economist – an academic field that is not centred on books as scholarly output.

When I was in high school, a history teacher encouraged me to read Robert Heilbroner’s The Worldly Philosophers: The Lives, Times And Ideas Of The Great Economic Thinkers.  I don’t remember how I found a copy in the suburban Chicago shopping malls near my home, but I wanted to own that book. Reading Heilbroner’s vivid accounts of the big economic thinkers’ ideas in context, both their historical settings and their personalities, made economics come alive for me and convinced me that those ideas mattered.

Years later, at a college fair for local high school students, a young woman visiting my table asked me why I became an economist, and I told her that story. Her eyes lit up, and she told me to wait and she would be right back. She ran to her book bag and hurried back holding up her own copy of The Worldly Philosophers, excited to make a connection. I don’t know if she became an economist, too, but she might have – this book inspired me to study economics.

By the time I read Heilbroner as a teenager, I was creating my own political understanding of inequality: the racial inequality that I was born into in North Carolina as a white person, the social expectations and constraints I felt on my life as a young woman, and the poverty that I had seen in Chicago and on service trips to Appalachia with my church youth group.  Heilbroner’s book, along with the The Age of Uncertainty by John Kenneth Galbraith (which I experienced first as a TV series), convinced me that the roots of inequality and of efforts toward change were to be found in economics as much as politics.

After graduation from college, I spent almost two years working in a warehouse, grateful for a job during the last really bad recession in the early 1980’s. I didn’t need books to see with my own eyes how labour markets limit opportunities for some people (e.g. women), and expanded them for others (e.g. men). But a chance encounter with a magazine article by Barbara Bergmann, and later her 1986 book The Economic Emergence of Women, pointed me to labour economics and family economics as the means to understand labour market discrimination.

I ended up studying discrimination with a former student of Bergmann at the University of California, Berkeley, among others. Abstract theories of discrimination and the high level empirical analysis of labor economics didn’t give me a sense of what racial discrimination looked like in actual workplaces, though. But a classic book from the early 1930’s, The Black Worker: The Negro & the Labor Movement, by Sterling D. Spero and Abram L. Harris, was wonderfully detailed in its description of the tensions and struggles between black workers and white workers, and gave me fodder for other ways of thinking about discrimination and social change beyond the standard economic models.

Berkeley was also a book-lovers haven, with Telegraph Avenue lined with bookstores that beckoned seductively to busy students. There I discovered a life-changing book:  John D’Emilio’s Sexual Politics, Sexual Communities: The Making of a Homosexual Minority in the United States, 1940-1970.

D’Emilio’s extraordinary history of the early gay civil rights movement in America kept me up reading late into the night. It was exciting to learn about the history of my people (especially in the Bay Area) and how that recent history shaped my own thinking about myself as a lesbian.  Knowing about the early organizers who pushed back against deep discrimination to push for change in policies and important institutions in American life gave me a context to think about my own life and work.  Maybe most importantly, I realized from D’Emilio’s example that it was possible to do serious scholarly work about LGB people that is important for non-academics.

Encounters with those books created a pattern for me that I still follow in my work. First, I draw on historical work to understand the institutions at the heart of my research. In the last decade much of my work has been on gay marriage, and I wrote a book called When Gay People Get Married, to explore what happened when the institution was opened up to same-sex couples in the Netherlands and other places. Historians of marriage, like Stephanie Coontz (Marriage:  A History), Nancy Cott (Public Vows), and MaryAnn Glendon (no fan of gay marriage herself; The Transformation of Family Law), helped me understand the broader social purposes of marriage, along with how and why it has evolved as a legal and social institution.

Second, I use books as data. I’m working now on a project about the experiences of lesbian, gay, bisexual, and transgender (LGBT) actors. There’s not much scholarly writing about that topic, so I’ve been reading memoirs of LGBT actors to get a sense of how their sexual orientation and gender identity might have shaped their careers. So far I’ve read books by Chaz Bono, Jane Lynch, and Meredith Baxter, with more waiting in the wings. They’ve been fun to read, as much for the dish as for the data.

I can’t imagine being an economist without those books and many others. Numbers from survey data that get published in a journal article are a very thin approach to understanding the world. The analysis and description of real lives in books have added thicker texture to my thinking about how sexual orientation, gender, and race have shaped our lives.

Lee Badget is giving a public lecture at the LSE on Monday 26 November: ‘When Gay People Get Married’. The lecture is co-hosted by the Gender Institute, the Student Union LGBTQ Alliance and LSE Spectrum.  This is the Keynote Event for LSE Pride Week 2012. More details here.

Professor M.V. Lee Badgett is Professor of Economics and Director of the Center for Public Policy and Administration at the University of Massachusetts Amherst; and Research Director of the Williams Institute for Sexual Orientation and Gender Identity Law and Public Policy at UCLA. Her most recent book, When Gay People Get Married: What Happens When Societies Legalize Same-Sex Marriage (NYU Press, 2009), focuses on the U.S. and European experiences with marriage equality for same-sex couples. Prof. Badgett has testified on her work before Congress and many state legislatures, and she was an expert witness in California’s Prop 8 trial. In 2008, Curve Magazine named her one of the twenty most powerful lesbians in academia. Badgett received a Ph.D. in economics from the University of California-Berkeley in 1990, and has a BA in economics from the University of Chicago (1982).

Feature Essay: The books that inspired John Van Reenen: “I think I always enjoy reading Conservative thinkers more than leftist ones. It’s much more fun to have books that really challenge your positions rather than confirming your prejudices”

Feature Essay: A tale of two books: digital transformations are creeping across the face of academic life