Mary Fran T Malone‘s study of public opinion in six central American countries is a treasure house of empirical data on citizen responses to rule-of law dilemmas in the region, but disappointing to a reader keen to apply its insights to the similarly crime-afflicted region of Southern Africa, writes Tamlyn Monson. 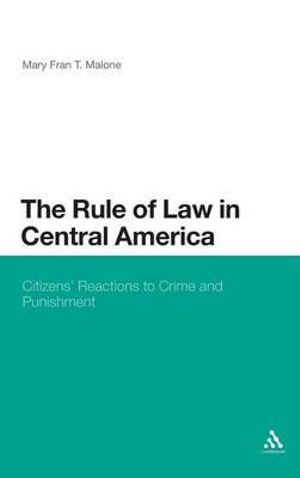 The central American countries of Honduras and El Salvador have the highest murder rates in the world according to the most recent data of the United Nations Office on Drugs and Crime (UNODC). Costa Rica, the ‘safest’ country in the region, has a homicide rate nearly ten times that of the United Kingdom, while Honduras, the most insecure, has a rate of 91.6 per 100,000 population, as compared to a barely discernible 1.2 in the UK. This unfortunate accolade illustrates the gravity of the crime crisis in central America. In terms of murder rates, it is second only to that of my home region and research area, Southern Africa.

Malone places central America’s crime crisis at the heart of her discussion of the rule of law. Democratization in the region has seen victims of repressive state actions transformed into victims of violent crime (p14). Sky-rocketing crime has in turn swamped justice systems, hampering the democratic reform of justice systems previously warped by authoritarian rule (p14; p62). How do citizens of the region react to the dual challenges of crime and institutional capacity, and what impact do their responses have on the rule of law in their respective countries? This is the question Malone’s book attempts to answer, using public opinion data from the Latin America Public Opinion Project (LAPOP) survey.

Citizen responses to the dilemma of crime, violence and corruption has the potential to entrench a ‘security trap’ or vicious cycle which erodes the rule of law and the quality of democracy (p16). Emerging institutions  are overwhelmed by vast numbers of cases, which they cannot deal with effectively. Their apparent inability to quell crime delegitimizes them in the eyes of citizens, who in turn become less likely to turn to official justice system when a crime occurs. When victims do not trust or engage with it, the judicial system becomes even less able to combat crime and convict criminals, and the cycle of underperformance, delegitmization and distrust continues. Society falls prey to a “negative equilibrium” – a self-reinforcing cycle of apathy, cynicism, opportunism and deviation from the law by both officials and citizens (p16-17).

Citizens’ reactions to a crime crisis can encourage the development of a negative equilibrium if the security dilemma drives them to support  “undemocratic measures” (p18) such as remilitarization, the granting of extralegal powers to police (as seen in El Salvador’s Plan Mano Dura (p18)), or vigilante justice (lynchings are particularly common in Guatemala (p19)).The less controversial response – recourse to private security measures; common to all central American countries – also threatens the rule of law as citizens increasingly isolate themselves and security becomes a preserve of the wealthy.

Malone argues that a variety of differences among the six countries help explain why citizens tend to “favor one ‘escape’ from the security trap over another” (p64). Differences in national political development, especially in the historical prevalence of political violence and legacy of militarization, primed countries like Guatemala, El Salvador and Honduras for violent crime because of ex-soldiers and the availability of weapons (p55). These countries are also afflicted by a different type of crime than their neighbours – organized crime, which has a higher potential to “challenge the state’s monopolization of force” (p54). The nature of justice reforms in the different countries is also a factor, as are state approaches to crime, which range from El Salvador’s mano dura (iron fist) policy to Costa Rica’s diametrically opposed mano amiga (friendly hand). Malone emphasizes that it is due to these different country contexts that she can stratify the six cases into three groups with distinct trends in crime and justice. There are those with high crime and low rule of law (Honduras, Guatemala and El Salvador), those with lower crime and a higher quality rule of law (Costa Rica and Panama), and Nicaragua, with a low quality rule of law but without the challenge of extremely high levels of crime (p62).

The importance Malone places on contextual contingency makes it impossible to provide a broad summary of her findings. The Rule of Law in Central America will be a great empirical resource for researchers, journalists or other practitioners concerned with rule-of-law issues in central America. I was disappointed to find I could not glean much in terms of the broader relevance of Malone’s work to my own preoccupation with rule-of-law issues in similarly crime-ridden Southern Africa. Malone is understandably reticent to make broader links, but it seems a pity that such a rich comparative study consequently lacks a sense of broader significance.

At the same time, also because of the contingency of variables across national contexts, the tentative conclusions Malone does offer – specifically her promotion of preventive and holistic public security models (p180;185), seem somewhat speculative, especially as the countries using these models have comparatively low levels of crime for the region. The inconvenient and messy realities of context that hinder Malone in drawing stronger conclusions lead, however, to the main theoretical insight of the book. Malone insists on what is somewhat self-evident to a sociologist – “the importance of studying citizens’ reactions to crime and justice in their appropriate national contexts” (p180). This is a useful counterpoint to the often distant, birds-eye view of political science.

Tamlyn Monson is a PhD scholar within the Centre for the Study of Human Rights at LSE, conducting research into mobilisation, violence and the politics of informal settlements in South Africa. She is linked to the African Centre for Migration and Society, and is part of an international network of scholars conducting collaborative research into the politics of xenophobic exclusion in Africa with support from the French National Research Agency (ANR). Read reviews by Tamlyn.