Animal Cities builds upon a recent surge of interest about animals in the urban context, bringing together case studies on working and productive animals that lived and died in nineteenth-century cities such as London, Edinburgh and Paris with the argument their presence yields insights into evolving contemporary understandings of the category “urban” and what made a good city. The collectionmakes a significant contribution to animal studies and it will be of interest to historical geographers, urban, cultural, social and economic historians and historians of policy and planning, finds Karl Baker. 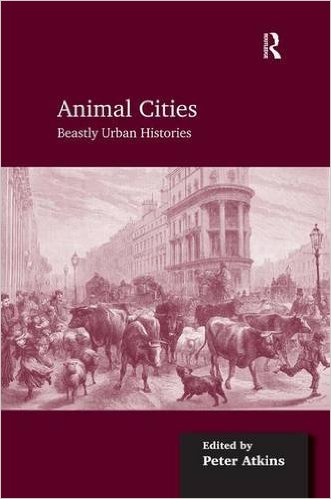 Animal Cities presents a collection of essays on the changing role of animals in cities during the nineteenth and twentieth centuries. Concerned primarily with the place of ‘productive animals’ – horses, cattle, chickens – this volume of urban history documents the deliberate exclusions of animals from streets and backyards that accelerated in industrialising cities from the 1850s.

The history of London provides a reference point for many of the essays. Tracing the city’s animal histories through still visible reminders in streets and place names is an intriguing pursuit. While Smithfield today only deals in dead animals, it was once a congregating point for thousands of steaming cattle brought to market and quickly onto the surrounding Farringdon slaughterhouses. Likewise, geese and turkeys would find themselves for sale on Poultry, after being driven down London’s high streets – the drover’s paths still inspiring renewed connections between city and countryside.

Animal Cities fills in fascinating details about the animal-based urban economies that were such significant parts of cities well into the nineteenth century. Many of the essays devote considerable attention to summaries of archival statistics. In Paris, for instance, up to thirty convoys of sheep and cattle passed through the streets each day, amounting to millions of animals each year. Melbourne meanwhile had more chickens than people in the 1880s: over 280,000 in the rapidly expanding colonial city. In London, up to 20,000 cattle provided much of the city’s milk supply in the 1850s, and up to 300,000 horses were used at the peak of horse-drawn transport around the turn of the twentieth century.

Peter Atkins, editor of the volume, positions Animal Cities as a work of ‘historical geography’, distinguishing the contributors’ extensive use of archival material from more theory-heavy recent treatments of urban animals. Atkins’ own three essays – all using the case of London – argue that an important transformation of both popular urban attitudes and physical infrastructure occurred in the mid-nineteenth century which fundamentally changed the relationship between city and countryside, and between human and animal city dwellers.

Firstly, food-producing animals become unwelcome ‘nuisances’ – and the accompanying industries depending on their bones, hair, blood and guts increasingly subject to legislation and regulation. The ‘Removal of Nuisances and Prevention of Epidemic Diseases Act (1846)’, for instance, reflected a new enthusiasm for a ‘sanitary idea’ that sought to remove smells, wastes, and animal industries from the city. Secondly, the construction of sewers broke the “charmed circle” where exports of animal and human manure nourished market gardens on the city outskirts (Atkin’s and Sabine Barles’ essays on the production of manure and cultivation of vegetables on the outskirts of London and Paris are both fascinating).

The ‘purification’ of urban life into a more sanitised and exclusively human realm obviously had advantages. But what emerges from the collection of essays is an argument that this banishment of animals from cities has never been merely an inevitable response to practical problems. Rather, it involves historically- and culturally-specific reactions. In the nineteenth century British case, the animal exclusions were most particularly driven by public health and ‘hygienics’ thinking based on the miasma theory of air-borne disease.

The role of “changing cultural visions and values” in the disappearance of animals from cities is made particularly evident in Andrea Gaynor’ history of backyard ‘chooks’ in suburban Australia. Gaynor’s piece is interesting in extending these histories into the twentieth century. She shows how new regulations governing ‘nuisance’ animals were still being introduced during the 1960s. Middle class visions of tidy suburban streets were expressed through local government orders and combined with changing agricultural economies to result in the decline of backyard chickens and the rise of industrial batteries.

The questions that arise for the urbanism of today are whether we might now envisage a less heavy-handed ‘purification’ of ‘the urban’ and ‘the natural’. With current enthusiasm for ‘green cities’, do productive animals now again have a place in our streets and backyards? After all, urban chickens and pigs might provide truly local eggs and bacon, while contributing to recycling of household wastes and reconnecting us with the production of our food. There’s certainly some attraction to such ideals, but a number of the contributors to Animal Cities point to the continuing dominance of the animal-free urban ideal that emerged in the nineteenth century.

Sabine Barles argues that while modern urbanism “greatly stresses the importance of nature in the city, it never mentions animals as a component of this nature … an urban planners nature is a nature without animals, reduced to the sun, the air, the light, the salutary vegetation”. In these visions, animals are still messy, dirty, smelly and properly rural. As Peter Atkins notes, current green thinking often seeks an urban nature that is as controlled and sanitised as that installed by Victorian-era regulation.

Perhaps the most urgent reflection on these urban animal histories needs to occur in relation to locations where urbanisation today is most rapid. With the transformations happening at the edges of Asian and African cities – places where chickens and pigs are still very obviously present – will animal based-livelihoods and economies be banished as they were in London and Paris? Or is there potential for a less zealous cleansing of productive animals from urban areas?

Animal Cities offers an important contribution to a neglected field of study, opening up an array of questions that deserve further attention. It positions animals not as peripheral participants of the city, but as central to historical stages of urbanisation. Most importantly, the history of our changing relationships with productive animals raises questions about how we define the good city today.

Karl Baker is a Researcher at LSE Cities, at the London School of Economics and Political Science. Karl recently graduated from the MSc City Design and Social Science programme at the LSE. He also holds a BA (Hons) in Political Science from Victoria University, Wellington. He has previously worked as a policy adviser for New Zealand’s Ministry of Transport where he advised governments on priorities for transport infrastructure investment. He has worked on improving project evaluation methods to better understand the impact of transport infrastructure on the social, environmental and economic performance of cities.