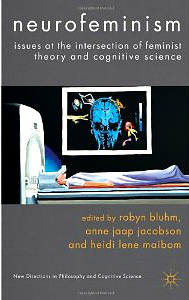 Neurofeminism is a collection of eleven essays on the critical relationship between feminist theory and neuroscience. Feminist neuroscience gathers a diverse crowd; the authors (including volume editors Robyn Bluhm, Anne Jaap Jacobson and Heidi Lene Maibom) mostly come from the disciplines of Philosophy, Psychology, and Women Studies, with others being neuroscientists, biologists and engineers.

For unfamiliar readers, neuroscience is the study of the nervous system, including the brain, the spinal cord, and networks of sensory nerve cells, or neurons, throughout the body. Neuroscientists describe the human brain and how it functions, determine how the nervous system develops and maintains itself through life, and find ways to prevent or cure neurological and psychiatric disorders. Feminist reviews of neuroscience started with the questioning of modern scientific conclusions and methodologies in the 1960s, and have been going on in the fringes of mainstream academia ever since. Still, this is the first time that the provocative term neurofeminism appears in an academic book title. Rather than claiming the consolidation of a new research field, the aim of the authors was to put together interdisciplinary perspectives which follow the common goal of methodologically, epistemologically, and ontologically questioning mainstream neuroscience.

Several contributions point to the fact that the peer-review system favours the publication of experimental results showing gender differences rather than similarities in brain behaviour. In her chapter ‘The Politics of Pictured Reality: Locating the Object from Nowhere in fMRI’ Letitia Meynell criticizes the methodological over-reliance on machinery for observation and analysis. Functional magnetic resonance imaging (fMRI) and 3-D foetal ultrasound produce two objects, the female brain and the male brain, that come from nowhere; that is, that do not exist as physical realities outside the world of statistical averages. Ginger Goffman’s chapter ‘What, If Anything, Can Neuroscience Tell Us About Gender Differences?’ shows how basic axioms of statistics are not taken into account in a variety of neuroscentific studies. She presents a study published in Cognitive Science (Price & Friston, 2002) that illustrates how variation among individual brains is higher than differences between grouped female/male brains, suggesting that gender is an irrelevant discrimination factor from the statistical point of view. Additionally, the small number of subjects that are the basis for such fMRI studies make results unreliable, according to representation based on sample size. These same authors look into task-based experiments, such as Simon Baron Cohen’s famous study on gender and childhood games (2005), in which the choice of toys or games that the subjects are asked to play with responds to the researchers’ gender attributions of what is considered feminine or masculine. In all, social constructs derived from the researchers’ tools, stereotypes and experimental designs permeate neuroscience labs.

Gillian Einstein’s chapter on female genital cutting (FGC) escapes common reification and is a brilliant alternative to mainstream neuroscience. By undertaking situated neuroscience, that is, by combining the subjective accounts of Somali women that have gone through FGC, with objective physical exams of the genital area, Einstein argues that “the world writes on the whole body”. She looks at the interactions and reciprocal relations between the central nervous system and the whole body, which remains after the amputation. Because of the existence of phantom limbs in amputees, a possible neurological outcome of FGC is a phantom clitoris. “In trying to determine which body region is represented next to the clitoris, it becomes apparent that no one has actually mapped female body regions to their representative neurons in the brain (···). This is an astonishing area of ignorance to most neuroscientists when it is pointed out to them” (p.170). Moreover, her questions are not restricted to the amputation itself, but include the chronic experiences of pain, body mobility and skin oversensitivity. The neuroscientist constructs an interdisciplinary object and combines tools from the social sciences and neuroscience, re-defining her object of research and opening new directions of thought.

Ontologically, feminist neuroscience counters pop neuroscience, which is how Robyn Bluhm identifies the bestsellers that locate women’s agency in a brain that is separate from the body. An example is Naomi Wolf’s last book, which locates the female agency in a particular genital area, the vagina. As Cynthia Krauss puts forward, naturalizing gender stereotypes and reducing gender issues to communication problems (such as in Why Men Don’t Listen and Women Can’t Read Maps) makes gender inequality less political. The responsibility for changing discrimination against women at work, or an unfair domestic share of household tasks, falls into the hands of women that thus blame their essentially problematic biological equipment.

Popular narratives on female identities tend to counter contemporary cognitive science explanations on how we think. Cognition never happens in isolation and it is always interactive. The body, in words of philosopher Andy Clark, “is the locus of willed action, the point of sensory-motor confluence, the gateway to intelligent offloading” (2008: 207). Human cognition is not the innate, monolithic, deterministic, genetic and individual process that mainstream neuroscience and pop neuroscience picture. As this volume shows, the brain is a plastic, situated and flexible organic entity that interacts constantly with the physical, cultural and social environment. Most importantly, and here is where sociology, anthropology, social psychology and other disciplines that are not part of this volume can play an important role, these changes happen not only at the biological or the psychological level, but at the social level. When authors from pop neuroscience picture women as unique brain-body-behavior systems, they are ignoring the social nature of the embodied mind. It is at the level of the social system that women and men negotiate work family balance in their everyday lives, through work, pleasure, love and creativity.

The bibliography, which has been merged at the end of the book, is up to date and of extreme value for students and academics who wish to understand the state of the art of feminist cognitive science.

Dafne Muntanyola-Saura has a Ph.D. in Sociology from the Universitat Autònoma de Barcelona (2008), where she is currently teaching Cultural Consumption and Ethnography. She has been an MA student at Stockholm University, and a postdoc researcher in Nice and Madrid, as well as Fulbright Scholar at University of California, San Diego (UCSD). She is part of the interdisciplinary project Dance and Cognition, with the Wayne McGregor-Random Dance company and professor David Kirsh from UCSD. She translated Cicourel (2007) and Kirsh (2007) into Spanish. Her current research crosses over the fields of contemporary cognitive science (embodied / distributed cognition) and video-aided ethnography (Muntanyola, 2012, & Kirsh, 2010). She studies expert and creative teams in different work environments, such as hospitals, TV sets, dance and swimming. You can also see her academia.edu profile. Read reviews by Dafne.