In Brazil on the Rise, New York Times reporter Larry Rohter takes the reader on a lively trip through Brazil’s history, culture, and booming economy. Aiming to go beyond the popular stereotypes and media representations, he discusses a stunning and varied landscape and how a complex and vibrant people defy definition. Reviewer Mark Dinneen writes that the book will be welcomed by those with little knowledge of Brazil looking for a readable, informative and up-to-date overview of the country. Brazil on the Rise: The Story of a Country Transformed. Larry Rohter. Palgrave MacMillan. March 2012.

In response to increasing worldwide interest in Brazil, fed above all by its remarkable economic growth, Larry Rohter has produced a valuable introduction to the country’s culture, society, and, in particular, its process of economic change. The book’s publication is certainly timely. As Brazil’s international profile continues to grow, not least because of the preparations for its hosting of the football world cup in 2014 and the Olympic Games in 2016, the demand for informative works such as this, aimed at non-specialist readers, will surely strengthen.

Rohter makes good use of his considerable knowledge of Brazil, where he lived for many years working as a correspondent for U.S. newspapers, and has deep and extensive personal ties. As becomes clear in the book, he has had privileged access to major figures in the political, cultural and business spheres. Understanding the extraordinary changes the country has undergone since the time of his first visit in the 1970s, when it was ruled by repressive military dictatorship and its obvious economic potential seemed doomed to continual frustration, is the main motivation for the book. That is emphasised in the Introduction, where Rohter states his intention to go beyond the clichés that have long been repeated by many overseas commentators, and show Brazil in ‘a more substantive light’ (p.6). In these opening pages, Rohter makes clear his admiration for Brazil’s rise as a major economic, cultural and political force, and the exciting opportunities now opening up for the country as a result, but he promises to be a forthright critic when he feels it to be justified. One strength of the book is certainly Rohter’s willingness to confront sensitive issues head-on, such as the relative lack of racial discrimination that is still assumed by many to characterise Brazil, but which Rohter exposes as more mythical than real in chapter 3.

The scope of the book is wide. After a first chapter sketching out Brazil’s historical development since Portuguese colonisation, subsequent chapters provide some insightful overviews of cultural and social practices, attitudes towards race, the arts, the acceleration of industrialisation, the country’s vast natural resources, and the current political scene and development of foreign policy. It succeeds in demonstrating the full complexity of all areas of Brazilian society and the issues it confronts. However, some unevenness results from the ambitious coverage. The discussions of race (chapter 3) and the social role of major leisure pursuits such as football and carnival (chapter 4), for example, are generally lively and perceptive, whilst chapter 5 provides a somewhat dry description of the achievements over many decades of major figures from the arts, which is not effectively integrated into the overall theme of the book.

Rohter is at his best in those sections where, on the basis of his inside knowledge and personal experience, he critically examines cultural values and codes of social behaviour.   Seeking explanations but highlighting contradictions, he tackles many of the key aspects of Brazilian daily life that are likely to puzzle, fascinate or perhaps irritate outsiders unfamiliar with the country.  That is best exemplified by the engaging passages in chapter 2 that consider, and illustrate with personal anecdotes,  the complex attitudes towards religious faith and sexual conduct in Brazil, and, most notably, the positive and negative outcomes of the prevalent role of the jeito – ‘the skill required to maneuver around the laws or social conventions that prevent you from achieving an objective’ (p.34).  Though obviously not a work of rigorous academic analysis, later chapters provide solid and instructive accounts of the country’s strong development of both agricultural and industrial production, the exploitation of its vast energy resources and the controversial debate over the future of the Amazon.

Rohter assesses Brazilian development very much through American eyes, and regularly draws comparisons between the practices and policies in the two countries. At times, the comparisons are enlightening, highlighting what is distinctive about the Brazilian approach, but at others it is a limitation.

To be fair, Rohter strives for a balanced account. He frequently recognises the advantages that have derived from Brazilian governments following a different path from that favoured by Washington. He acknowledges, for example, the benefits obtained for Brazilian development through the significant role given to the state in economic policy – anathema among many U.S. politicians. Too often, however, Rohter presents U.S. models and foreign policy initiatives as the obvious ones for Brazil to follow, and agreements for economic, technological or military collaboration between Brazil and nations other than the U.S. are treated dismissively, even with derision. In a similar vein, the Brazilian government’s perfectly reasonable decision to maintain cordial relations with Venezuela’s Chávez regime – an ‘adversary’ of the U.S. – can only be understood by Rohter as foreign policy weakness. Rohter’s own political position is clearly revealed in the final chapters on Brazilian government policy and the current political environment, shown, for example, in the highly positive treatment accorded to ex-President Fernando Henrique Cardoso, which contrasts with the notably more critical stance towards his successor, Lula.

All in all, the book will be welcomed by those with little knowledge of Brazil who want a readable, informative and up-to-date overview of the country, and in particular of the causes and consequences of the significant changes it is currently undergoing. Many other works on the subject, and with similar basic aims, will surely follow over the coming years, addressing the limitations identified and offering alternative perspectives.

Mark Dinneen is a Lecturer in Latin American Cultural Studies at the University of Southampton. He took his first degree in Latin American Studies and then wrote his PhD on Brazilian literature for the University of Glasgow. He has spent periods of research in Mexico, Brazil and Venezuela. He currently chairs the Modern Languages Residence Abroad Committee. Read more reviews by Mark. 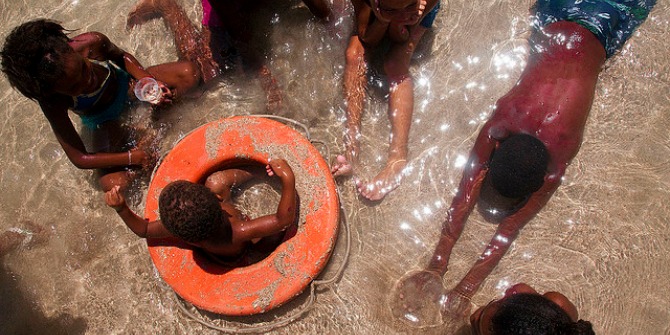