There is hardly another country as isolated and with such a bleak image as North Korea. Portrayed in the western media as a ‘hermit kingdom’ ruled by an outdated, communist dictatorship whose clandestine nuclear programmes alarm its neighbours, prospects look bleak for any improvement in relations let alone the start of a dialogue on human rights. Offering an informed analysis of the North Korean situation, this book argues that not only is a constructive and fruitful dialogue on human rights possible but it is also desirable for both parties. However, it is odd that a book which seeks to promote the discussion of human rights has nothing whatsoever to say about North Korea’s network of prison camps, writes Andrew McCracken. 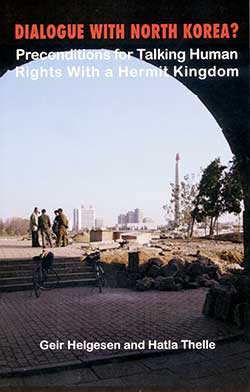 On 17 January 2001, on his final day in the White House, Bill Clinton and his Secretary of State Madeleine Albright reflected on missed opportunities. Albright recalls that the president fumed over the political capital he had expended on Yasser Arafat and the mirage of peace in the Middle East, wishing instead he had taken the gamble of following Albright’s talks with Kim Jong-il with an historic presidential visit to Pyongyang.

Such has been the disintegration of the relationship between the “hermit kingdom” and the United States that Obama undertaking a state visit to North Korea is today unthinkable. In this slim volume, two Nordic academics, Geir Helgesen and Hatla Thelle, make the difficult case that, in spite of its belligerent intransigence on the international stage and ill treatment of its own people, North Korea needs to be dealt with.

Western conceptions of North Korea have become dangerously simplistic, and the authors rightly urge a more culturally empathetic, if not sympathetic, approach. Bush’s notorious “axis of evil” speech – in which the president grouped North Korea in a diabolical trifecta with Iran and Iraq – proved a turning point in the relationship between Washington and Pyongyang. Perhaps even more worryingly, the wider Western world is in danger of making the mistake of dismissing North Korea as a joke. In April, no less a figure than the BBC’s Jeremy Paxman called Kim Jong-un “a fat little man in an absurd boiler suit”; years earlier in Vanity Fair, Christopher Hitchens described North Korea – with typical diplomacy – as a nation of “racist dwarves”.

Whether invoking the Kim dynasty as a byword for evil or merely a succession of dictatorial jesters, the West’s dismissal of North Korea has neither blunted its government’s weapons programme nor – crucially for Helgesen and Thelle – has it brought any improvement in the lives of the North’s hungry masses. Wisely, the authors’ antiquated theory that Pyongyang’s intolerance of international chastisement is a remnant of the country’s Confucian heritage is not pursued at any great length. It is nonetheless difficult to disagree with the book’s central assertion, that although shaking its collective fist and passing condemnatory resolutions in the UN may satisfy the West’s interminable need to occupy the moral high ground, this action has done nothing to improve the lot of the North Korean people.

Adopting the West’s earlier rapprochement with China as a model, the authors’ thesis is that the US and Europe should refrain from publicly condemning North Korea and start trying to find common ground with the Stalinist state. The authors urge pragmatism and a prioritising of the North Korean people’s welfare above more geostrategic concerns. Rather than seeking a resumption of the suspended six party talks (consisting of North and South Korea, the US, China, Russia and Japan) which focus on the nuclear issue, the West would be better served through extending overtures to Pyongyang, with the hope this will create a virtuous circle of increasing engagement and trust between North Korea and the international community. It is suggested that, having decades-old diplomatic ties with the isolated state, it is the Nordic countries themselves which are the obvious candidates to extend the olive branch to North Korea.

Helgesen and Thelle argue the West should seek to engage with North Korea through a trichotomous approach, similar to that pursued with mixed success with China: through a political dialogue which emphasises shared interests, in this case an increase in food and energy production; through regular summits of prominent intellectuals drawn from North Korea and Western states; and through the establishment of cooperative projects between foreign powers and Pyongyang which aim to raise the living standards of the North Korean people.

However, the authors do not address the question of whether the West’s various levels of engagement with China on human rights has yielded any tangible results for the Chinese people themselves. Improvements in the plight of the Chinese has arguably been achieved through economic growth rather than an attack of political liberalism within the upper echelons of Chinese leadership, who at the time of writing are suppressing a popular movement to require politicians to disclose their personal – and often illegally augmented – assets.

To Helgesen and Thelle’s credit, they would concede that a visit by a handful of Norwegian academics is unlikely to convert North Korea’s elite to liberal democracy. The authors’ goal is more modest – specifically, to ameliorate the material sufferings of the North Korean people through aid and joint initiatives between developed nations and the communist state. It is this appeal for compassion on behalf of the North Korean populace which ultimately proves the book’s most persuasive argument.

It is odd that a book which seeks to promote the discussion of human rights has nothing whatsoever to say about North Korea’s network of prison camps. There is further silence over the country’s flouting of international law and norms. Not only has Pyongyang determinedly pursued a nuclear weapons programme – in defiance even of China, its principal benefactor – and in recent years launched unprovoked and deadly attacks on South Korean military and civilian targets, it has also developed a sophisticated drug smuggling network through its consulate network, which provides the regime with much needed foreign currency.

Less peaceable opponents of the regime argue, not unreasonably, that such transgressions necessitate a confrontational stance towards Pyongyang, until the regime feels willing to fall into line on at least some of these fundamental issues. Whether it would be wise for the West to overlook such objectionably petulant misbehaviour is a point the book fails to address.

Provocative and often persuasive, Dialogue with North Korea makes an intriguing case for the West adopting a conciliatory approach towards the world’s most repugnant regime. Approaching the dilemma of negotiating with Pyongyang from an unusual angle, the book is to be recommended to students of East Asia or readers seeking a different perspective on the seemingly interminable Korean crisis.

Andrew McCracken graduated from LSE in 2010 with an MSc in the Theory and History of International Relations. His academic interests include Chinese history, the international relations of East Asia and strategic studies. He has studied and worked in China and currently works for a global risk management and investigations company in London. Read more reviews by Andrew.