People-Centred Public Health examines how members of the public can be involved in delivering health improvement, primarily as volunteers or lay health workers. Drawing on a major study of lay engagement in public health, and using case studies and real life examples, this book aims to provide a comprehensive and accessible overview of policy, practice and research in this area. Lindsay Harris feels that a more international perspective would have added invaluable insight and broadened the audience for which this book will appeal. 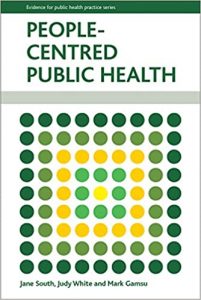 People-Centred Public Health provides a positive addition to public health discourse in the UK. The book offers readers an all-encompassing attitude towards what public health means and how general citizenship can contribute greatly towards improving the quality thereof. The authors challenge traditional perceptions and encourage a more positive attitude towards volunteers in the public health space, identifying these individuals as key contributors to the economic and social make-up of the UK.

In the book, Jane South, Judy White and Mark Gamsu provide a critical look at both the policies operating around public health in the UK as well as illustrative case studies. Those interested in or working in public health in the UK will find this book particularly interesting. Unfortunately, although the issues discussed in the book are prevalent all over the world, the narrow UK perspective may limit interest.

Chapter 11 focuses on dispelling a number of myths associated with the role volunteers play in promoting and improving health. Whilst the likes of Margaret Whitehead argue that “strengthening individuals in disadvantaged communities is of limited value because they only treat the symptoms and not the underlying causes of inequalities”, these authors disagree, arguing that while macro-level solutions are clearly required, the success of such interventions are likely to be far more successful if there is active citizen engagement.

The role of lay workers is often viewed in a negative light as they do not fit into the traditional parameters of ‘professional health workers’. However, as this book serves to illustrate, the diversity of the public health space is such that there are a variety of roles to be fulfilled, some of which are better achieved by lay workers than professionals. This is particularly true in the developing world, where lay workers are often the only form of health support available. This highlights one of the shortcomings of the book. Whilst the exclusive UK focus is clear from the onset, the prevalence of the public health issues discussed is not limited to the UK. For this reason, a more international focus would have added useful diversity and interesting case study material. It would also have broadened the audience to which this book would appeal.

Opponents to the volunteer model argue that volunteers are still contributing a service and thus should be paid otherwise this nature of worker could threaten jobs. The publication of this book comes at an interesting time when the economic environment is contributing to vast budget cuts and the associated job losses – particularly in the public sector. The authors are strong in their argument that paid posts should not be replaced by volunteers. However, they go on to say that if implemented correctly, volunteers play a vital role in both the economic and social fabric of the UK, without threatening more traditional positions. Again, this is where an international perspective would have contributed additional value. In many countries, volunteers and the organisations for which they work fulfil many primary services which the government is either unable or unwilling to provide. This only serves to solidify the critical role played by volunteers in society.

Critics argue that while volunteering is generally viewed as a positive service, there is a lack of quantitative evidence to suggest this actively contributes to improving access to quality healthcare. As mentioned in other parts of the book, the authors feel that public health is viewed from a very narrow perspective – that only macro-interventions will be of use to improving clinical outcomes whilst the overall improvement of quality of health is ignored. This is a critical problem when attempting to dispel this myth. As the authors identify, this is far more than a dissemination challenge – “if the wider impacts of involving citizens are to be captured, there needs to be a better understanding of the nature of health programmes that seek to work in partnership with communities”.

One of the key shortcomings of the book is its failure to identify the additional value of volunteers in the context of the severe shortage of health professionals. The Joint Learning Initiative (JLI), an international network of global health leaders whose purpose it is to better understand and improve systems for human resources in health around the world, suggested that “on average, countries with fewer than 2.5 healthcare professionals… per 1000 population failed to achieve an 80% coverage rate for deliveries by skilled birth attendants or for measles immunization” (World Health Organisation, 2006, p. 11). With such a critical shortage of health workers both in the UK and internationally, the role of volunteers has become increasingly important in improving public health. Whilst the value of volunteers in the public health space is clear throughout this book, an accurate description of the context in which they operate and the additional value they can provide as a result which was found lacking.

The book is an enjoyable read and provides a valuable contribution to current UK public health debates. However, considering the global challenges facing public health – particularly the increasing shortage of health workers – a more international perspective would have added invaluable insight and broadened the audience for which this book will appeal

Lindsay Harris is a Monitoring and Evaluation (M&amp;E) specialist currently working in South Africa in the field of public health. She has an MSc in Human Rights from the LSE and an MPhil in M&amp;E from the University of Stellenbosch. Her current research interests include South African struggle history, the Holocaust, the evolution of South African politics, conflict in the developing world and human rights discourse.

Posted In: Britain and Ireland | Contributions from LSE Alumni | Health