Inventing the Market: Smith, Hegel, and Political Theory analyses the constructions of the market in the thought of Adam Smith and Georg Wilhelm Friedrich Hegel and discusses their relevance for contemporary political philosophy. Combining the history of ideas with systematic analysis, it contrasts Smith’s view of the market as a benevolently designed ‘contrivance of nature’ with Hegel’s view of the market as a ‘relic of the state of nature.’ As the various prizes won by Herzog for this work confirm, this is an excellent scholarly effort, concludes Luis Boscán. 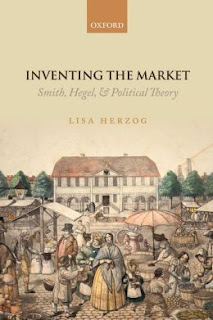 The market – that mechanism by which suppliers and consumers exchange and from which a price signal emerges, reflecting the valuation and relative scarcity of a good – is at the core of economics as it is studied today. Beyond academia, markets also constitute a fundamental part of the way citizens relate to each other in contemporary society: that ‘complex system in which people buy and sell, offering money, goods, labour, time, and abilities … in our roles as workers, customers and investors’ (p. 1).

With this topic as motivation, and from the title onwards, this book should appeal to anyone interested in the “dismal science”, as ‘its subject matter, the market, is taken from economics’ (p. 11). The author’s philosophical approach, which stands in contrast to how economic theory is practised nowadays, is precisely what makes the book interesting, as ‘many … aspects of markets … are hidden in the premises of economic models and taken from granted when economists work with them’ (p. 2). From their perspective, being able to reflect on several fundamental questions about markets and the ideas that unknowingly shape today’s Economics must be an important exercise, as economists are not usually exposed to such ‘existential’ (p. 2) topics as part of their training.

In Inventing the Market, the choice of thinkers by author Lisa Herzog, a Postdoctoral researcher at the Institute for Social Research, is justified by the observation that, besides Norbert Waszek’s historical study, ‘ a systematic comparison of Smith’s and Hegel’s views on the nature and meaning of the market has not hitherto been undertaken’ (p. 8). Moreover, both authors remain ‘… among the most controversial, and most often misrepresented, thinkers of the last 250 years’ (p. 5). Besides, while Smith and Hegel ‘stand at the two ends of a scale of views about how much scope the market should be given’ (p. 9), both are able to see benefits of a market-oriented society.

Building on Herzog’s doctoral dissertation, the study is divided into two parts. The first of these, defined as interpretive, locates Smith’s and Hegel’s views about the market in the larger, more complex dimension of their philosophical systems and historical contexts. The second part of the study, of a systematic nature, deals with the implications of living in a market society from the perspective of both thinkers.

An interesting claim about Smith and Hegel made in the book is that ‘the greatest differences between their views, and between theirs and ours, do not lie in the different uses of certain concepts, but in the metaphysical background assumptions: Smith’s deism and Hegel’s metaphysics of Geist’ (p. 13).

Smith, a prominent representative of the Scottish Enlightenment, was much more than the father of economics. The invisible hand argument, which appeared first in The Theory of Moral Sentiments (1759) and later in The Wealth of Nations (1776) is ‘no mystical intervention by a deity, but rather a happy coincidence of private interest and common good’ (p.33) in which the actions of individuals result in positive outcomes for the society as a whole. Based on a well-designed institutional framework that ‘provides external defence and secures property rights’ (p.29), the free market mechanism is allowed to act along with state intervention, which provides ‘some things that are desirable for the common good … not delivered by the market’ (p. 36) and mitigates other undesirable consequences of it. An interplay between nature, designed by a benevolent God, and institutions reliant on an impartial spectator who ‘can endorse an institution if it leads to good consequences for everyone concerned, without sacrificing the interest of some to the interests of others’ (p. 28), Herzog interprets Smith’s views about the market society as a ‘much more nuanced picture than the textbook cliché’ (p. 17), far from the purely laissez faire advocacy usually ascribed to him.

Hegel, a leading figure amongst German Idealists, who published his Philosophy of Right (1820) is depicted as ‘presenting a more chaotic and Dionysian’ (p. 43) vision of the market, standing in contrast to that of Smith’s and favouring ‘ a much stronger regulation of the market’ (p. 59). While his philosophy is frequently described by scholars as complex and obscure, Herzog is able to skilfully lead the reader to the key concepts of Hegel’s ‘practical philosophy’ (p.43) without ‘delving into the muddy waters of his logic’ (p. 45). Geist – a fundamental concept of Hegel’s system discussed in his Phenomenology of Spirit (1807) – is summarized in relation to its relevance for Hegel’s social and political views as the ‘collective mindedness of human beings’ (p. 48). A second, complementary notion is that of Sittlichkeit: ‘a constitutional state that includes the realms of the family and of the private economy, in which individuals are given a broad range of rights and liberties’ (p. 48); that is: a strong claim for modernity in which the subjective freedom of the individual is achieved, even if this implies the admission that the market does not improve the situation for everyone.

Inventing the Market clearly is an excellent piece of scholarly effort as the various prizes won by Herzog for this work confirm. I feel closely identified with many of her claims but, particularly, with her view that ‘both philosophers and economists can benefit from a more historically situated approach to economic phenomena’ (p. 16).

On the other hand, I also feel at odds with some of Herzog’s criticisms about the current state of Economics, not because I deny that many economists need to flee from their ivory towers or that I neglect much needed methodological innovation, but because I believe that some of these arguments are flawed. For example, when she points at the ‘abstract, mathematically based models’ (p. 2) which some schools of thought criticize because of its ‘focus on equilibrium states’ (p. 2), I see redundancy along with a misunderstanding of the multi-faceted nature of the equilibrium concept in economics. Furthermore, there is nothing wrong with the mathematization of economics per se as mathematics and philosophy can happily coexist. In fact, Amartya Sen, who belongs to ‘the small but stubborn group of thinkers who cross the boundaries between philosophy and economics’ (p.8 n.30) made this very point in a recent interview. Finally, I agree with Dani Rodrik’s view (who brilliantly discusses the state of affairs in the Economics profession) that the established economic methodology provides members of its community with a sense of intellectual honesty. What is needed is innovation from both the inside and the outside of the economics community.