Book Review: America’s War on Terror: The State of the 9/11 Exception from Bush to Obama by Jason Ralph

Book Review: America’s War on Terror: The State of the 9/11 Exception from Bush to Obama by Jason Ralph

Following 9/11 the United States faced a situation of exceptional insecurity. In that period the Bush administration argued that certain international norms did not apply to US conduct. More than a decade on from 9/11, and following a change of administration, this book aims to examine the influence this approach has had on American policy. America’s War on Terror is an impressive interdisciplinary work which uniquely brings together an analysis of a well-worn topic from the lens of both international law and international political theory finds Liane Hartnett. America’s War on Terror: The State of the 9/11 Exception from Bush to Obama. Jason Ralph. Oxford University Press. April 2013.

Jason Ralph is a Professor of International Relations at the University of Leeds. He currently holds a British Academy Fellowship and is Deputy Director on the Building Sustainable Societies research project within the Leeds Social Science Institute. His book America’s War on Terror: The State of the 9/11 Exception from Bush to Obama is the second part of a three-phase research project exploring ‘The American Exception’. While the first phase culminated in the book Defending the Society of States: Why America Opposes the International Criminal Court and its Vision of World Society, the final project will examine ‘International law, the American exception and British centre-left foreign policies after Iraq’.

The events of 11 September 2001 triggered in the US ‘a state of exception’, or the suspension of some laws in the defence of order.  According to George W. Bush’s administration, the US was ‘at war with a new kind of enemy’ (p.1). Owing to this ‘exceptional insecurity’, the Administration did not consider the US to be bound by certain international norms (p.1). As each of the book’s chapters assert, this had profound consequences for the use of force and the prosecution, detention and interrogation of terrorist suspects after 9/11. With some qualifications, Ralph suggests that the presidency of Barack Obama – to the surprise and disappointment of many ‘liberal’ constituents – has represented ‘change within a broader continuity’ (p.21) in US policy on the ‘war on terror’. Taking stock of the Bush and Obama presidencies, Ralph’s book asks: ‘Has the approach to Al Qaeda outlasted the moment of profound insecurity that gave rise to it?’ (p.4) What explains the policy continuities in the Bush and Obama administrations’ ‘war on terror’? Finally, is ‘the 9/11 exception’ a proportional response to the threat of Al Qaeda or the epitome of American liberal internationalism?

Ralph’s project is animated by the need to challenge the assertion that the US ‘war on terror’ is ‘a quintessential liberal cosmopolitan war’ (p.7). Retrieving the ideas of Carl Schmitt, proponents of this view argue that “While the US purports to represent and act on universal values that erase normative lines between insider and outsider, the liberal discourse of human rights, freedom and democracy promotion inevitably securitizes the criminal so that it is treated as an enemy, and then draws lines between enemies and foes, excluding the latter from regimes that apply to the former” (p. 7). In essence, Schmitt’s ‘friend-enemy’ dichotomy is the irreducible core of politics. Following this logic, the so-called ‘9/11 exception’ is less an exception than testament to ‘the superficiality of the norm’ (p.5). It affirms that the law is ultimately contingent on the political. For Ralph, this Schmittian lens unjustly and inaccurately characterises the role of American liberal internationalism in the ‘war on terror’. For one, it conflates duelling versions of liberalism. One, he suggests, is the ‘hard’ Wilsonianism of neo-conservatives, which marries democratic peace theory with ‘offensive liberalism’. The other, he suggests, is embodied in a Kantian vision or the republicanism of the American founding fathers. It finds expression in an equal commitment to democracy promotion and a respect for international law (p. 12).

The ‘war on terror’ for Ralph bears testament to the struggle between these competing visions of liberalism. Hence, despite the Bush administration’s decision to characterise 9/11 as an act of war and treat terrorists/suspects as enemy combatants, there were pressures to respond to the situation within the framework of the (international and domestic) criminal systems. Similarly, although the Obama administration’s defence of drone warfare and the extrajudicial killing of Osama bin Laden was framed in the language of an ongoing armed conflict with Al-Qaeda, the administration’s decision to reduce the US commitment to nation-building in symptomatic of a liberalism based on exemplarism rather than aggressive democracy promotion. Drawing on the example of Guantanamo Bay, Ralph attempts to make the same argument. Although perhaps the ‘most potent symbol of the post-9/11 American exception’ (p.112), the Supreme Court decision of Boumediene v Bush (2008) once again problematizes the Schmittian critique. The decision affirmed detainees’ constitutional right to contest their detention in a US court. By erasing ‘lines of exclusion’ (p. 96), the Supreme Court suggested that ‘effective counter-terrorism and human rights are not always mutually exclusive’ (p. 99). To this extent, it was symptomatic of the ‘Madisonian insistence…that the US constitution was but part of a global constitution that protected the rights of humankind’. (p. 112) While this sentiment runs through Obama’s rhetoric and his initial plans to close Guantanamo Bay, Ralph suggests political realities including domestic policies and Congressional pressures have impeded Obama’s efforts.

Ralph’s book is an impressive interdisciplinary work, which uniquely brings together an analysis of a well-worn topic from the lens of both international law and international political theory. It is accessible and will appeal to students of international law, international relations and those interested in politics. The author’s discussion of political theory is however sometimes unsatisfying. For instance, he concludes that ‘the doctrine of pre-emption, and indeed the invasion of Iraq…, emerged out of a realist focus on national security rather than a commitment to a liberal agenda of democracy promotion’ (p.34). Similarly, it characterises ‘principled’ and ‘pragmatic’ Obama as combining ‘liberal and realist’ approaches (p.99). However, the book neither explores the (contested) content and limitations of these constructs in depth, nor does it challenge their adequacy for understanding and explaining the motivations of states and individuals.

America’s War on Terror often reads as liberal apologetics. Indeed, amidst growing critiques of liberalism, Ralph’s assertion that liberalism is not monolithic is refreshing. Yet, this thesis appears to rest on the distinction between the ‘good’ liberalism of republicanism and the ‘bad’ ‘inauthentic’ hybrid-liberalism of neo-conservatism. The problem with this thesis is that it fails to grapple with the contested legacy of Wilsonianism and indeed, American liberal internationalism itself (see for example John A. Thompson’s article ‘Wilsonianism: the dynamics of a conflicted concept’). In addition, it does not engage with the allegation that neo-conservatism is perhaps cast as a scapegoat for the failings of neo-liberalism (for contrasting views on this topic, see The Crisis of American Foreign Policy: Wilsonianism in the twenty first century). This uncritical examination of liberalism finds expression in the diagnosis that ‘“partisan animus” as well as the continuing existence of the terrorist threat that has helped ensure a degree of continuity in US policy since 9/11’ (p.146).

America’s War on Terror draws attention to the space between rhetoric and action, dissent and policy. It suggests that Schmitt’s thesis about friends and enemies may be simplistic. It highlights how a Schmittian critique of American liberal internationalism may lack nuance. Despite this, its depiction of liberalism is as unsatisfying as Schmitt’s.

Posted In: Africa and the Middle East | Contributions from LSE Staff and Students | USA and Canada 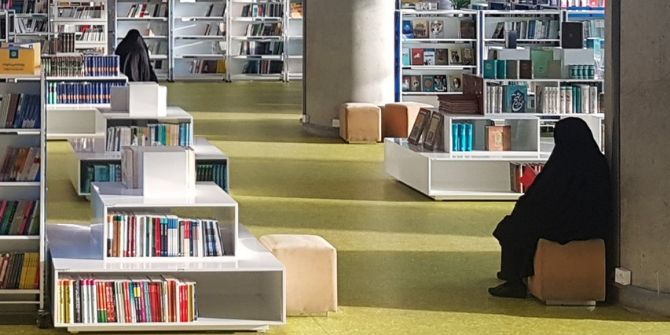