Egyptomania aims to explore our fascination with all things Egyptian and the events that fanned the flames: from ancient times, to Napoleon’s Egyptian campaign, to the Discovery of Tutankhamen’s tomb by Howard Carter in the 1920s. Elaine Housby finds this an accessible read, though Brier’s framing of some historical events is problematic. 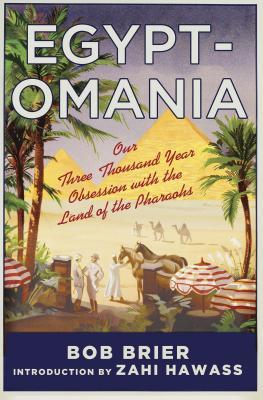 Bob Brier is an Egyptologist best known for mummifying a modern corpse in the ancient Egyptian manner and for developing a theory that pharaoh Tutankhamun was murdered in a palace coup. His work is mostly found in general interest magazines and television documentaries and this book is aimed firmly at a popular readership. It is unlikely to appeal to serious scholars of either ancient or modern Egypt, but it could form a useful entry point into some important debates for new students.

Brier has a large personal collection of items from popular culture which exemplify the commercial success of a romanticised image of ancient Egypt. The book contains numerous pictures of pieces from the author’s collection, some of them highly entertaining. It is this popular fascination with pyramids and Pharaohs that Brier refers to as Egyptomania.

The text summarises the history of this mania. It includes a section on Napoleon’s attempted conquest of Egypt accompanied by a team of ‘savants’ and the resulting monumental work, the Description of Egypt. However the choice of episodes to include seems to have been dictated almost entirely by what makes a good story, and Napoleon is given less space than accounts of the mechanics of moving obelisks from Luxor and Alexandria to London, Paris and New York. Naturally the story of the discovery of the tomb of Tutankhamun is also re-told. Brier tells us twice that the home of Lord Carnarvon, patron of Howard Carter, the discoverer of this tomb, is where the television drama Downton Abbey is now filmed.

Brier does not mention the use of the term Egyptomania as a way of dismissing the views of those who believe that much of the language and mythology of classical Greece was derived from Egypt. The best known exponent of this position in recent times is Martin Bernal, in his epic study Black Athena. While one would not expect to find discussion of such a heavyweight academic argument in a book intended for entertainment like this one, it is nevertheless irritating to see Brier stating (p. 20) that Herodotus and Plato both revered Egypt and regarded it as the source of much of Greek culture, without offering any opinion on whether they may have been correct in this belief, rather than merely suffering from an early case of Egyptomania, as he implies.

There is an interesting and rather amusing account of the rapturous reception given by the Freemasons of New York to the arrival of the obelisk in Central Park, after the discovery of a trowel and plumb-line in its foundations had convinced them that brother masons of the pharaonic age had left a message for future generations. Brier explains the impossibility of such foresight but deals only sketchily with the history of the adoption of Egyptian symbolism by the Masonic movement, an omission which is surprising considering that an example of such symbolism features on the banknotes of the United States.

The most serious problem that any account of the history of Egyptology ought to address is, of course, the unbalanced distribution of its rewards. Careful reading of any account of the ‘discovery’ of now-famous ancient sites reveals that the real discovery was usually made by local people who endeavoured to keep the information to themselves as long as possible, in the not unreasonable belief that the contemporary residents of the villages near the Valley of the Kings had the best right to make a profit out of anything found there. A mixture of negotiation and bullying by celebrity foreign excavators would then ensue, in which the locals invariably came off worse. Brier describes (p. 153) how two local men who in 1881 discovered the richest tomb found to date were forced to reveal its location under torture by the local pasha, to whom they had been handed over by Gaston Maspero, the director of the antiquities service. Brier does not however appear unduly concerned by this. The removal of objects from tombs by local people is described as ‘plundering’, but their removal by foreign archaeologists is not.

The whole issue of the much higher valuation placed by most western visitors on long dead Egyptians than on living ones has long concerned scholars aligned with the anti-Orientalism movement, for example Timothy Mitchell in Colonising Egypt.

The disproportionate emphasis given to any aspect of Middle East history that can be related to the Bible has also been frequently noted by such critics, and Brier provides a good example. The discovery of the mummy of Ramses II caused particular excitement among the western public because he is believed to have been the pharaoh in power during the period when Moses was trying to arrange the ‘exodus’ of the Israelites, and so, says Brier, he is the only person mentioned in the Bible whose face we can actually look at.

An introduction to this book has been provided by Zahi Hawass, the long-serving Egyptian Minister for Antiquities. Brier acknowledges his skill in negotiating better terms for the loan of Egyptian artefacts to foreign museums, and Hawass himself says he is proud to have raised the level of interest among Egyptians themselves in their ancient history. Hawass has now lost his job and been accused of various financial irregularities, though his main offence seems to have been to become too closely associated with the Mubarak regime This postscript neatly illustrates the enduring politics of Egyptology.

Finally, some readers may perhaps be attracted to this book because of their interest in ‘pyramidology’. Zahi Hawass is one of the few people to have been in a position to perform a controlled experiment on the alleged mystical powers of the pyramids. He relates that in order to test the claim that meat left inside a pyramid will never decay he bought a pound of meat and left half of it inside the Great Pyramid and half in his adjacent office. He reports ambiguously that ‘the results were just what you would expect’.

Posted In: Africa and the Middle East | History