Søren Kierkegaard was a nineteenth century Danish philosopher, theologian, and religious author who many consider to be the first existentialist philosopher. In Life Lessons from Kierkegaard, novelist Robert Ferguson attempts to draw out from Kierkegaard’s work some essential lessons on life. James Walters finds this a pleasant, easy read and a practical introduction to a handful of Kierkegaard’s ideas, but challenges Ferguson on some of his arguments around the mismatching of rationality and religious belief. 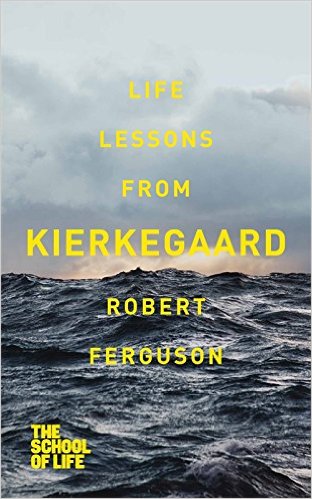 The Prime Minister David Cameron recently reflected a popular misconception when he described Christianity in a radio interview as “not a bad handbook for moral guidance.” Just a little attention to its sources and its key thinkers would tell him that Christianity aspires to a far more expansive vision of a transformed world. This ideological reduction to morals and manners is a typical example of the flattening of the religious ideal in an age that finds the religious difficult to comprehend.

I feared that I would encounter a similar example in this 100 page book entitled Life Lessons From Kierkegaard for two reasons. First, a thinker of such intense complexity, who made paradox his trademark, is not easily reduced to the eight pithy life lessons this book contains without gross simplification. Second, forming part of a series published by The School of Life (part of Alain de Botton’s crusade to bring us Religion for Atheists), I suspected that the religious kernal of Kierkegaard’s worldview might be ignored or viewed as irrelevant.

The book begins and ends with the author’s wrestling with precisely this issue. How can it be, muses Ferguson, that “with all his love of Christ, [Kierkegaard’s] was also one of the most rational, intellectual, analytically precise and psychologically acute minds most of us are ever likely to encounter” (p.5)? While he seems quite unaware of the prejudices expressed here, he doesn’t dodge the issue and is prepared to acknowledge that Kierkegaard’s decision “to believe that Christ really was the son of God” (p.89) is at the heart of his response to the challenges of life.

Yet he seems determined to divorce the Danish philosopher’s practical wisdom from anything other than the most personalist form of Christian faith. He states emphatically that Kierkegaard is “not an orthodox Christian” (p.89) (which I would emphatically dispute), justifying this in his famous critiques of the Danish national Church. Yet Kierkegaard’s appeal to such orthodox Christian theologians as Karl Barth was precisely in his critique of institutional religious corruption as a return to the purity of the faith revealed in Jesus. Good theology usually critiques the Church.

Ferguson suggests that it was inevitable from Kierkegaard’s upbringing that he would use the Bible as a sort of “sourcebook for every conceivable kind of existential question” (p.41), (as if implying that any other book would have done) and states that he “toyed with the idea of doing without the Bible altogether” (p.73). But the extent to which Kierkegaard’s writing is imbued on every page with the biblical narratives points to how this attack in his journals on his fellow Christians’ “concentration on the Bible” is not a rejection of Christian orthodoxy but a further example of his desire to undermine religious idolatry, in this case that of lazy biblical interpretation. This in fact pre-empts a strong strand in subsequent twentieth century theology (e.g. Bonhoeffer, Stringfellow, Marion).

On the question of simplistic reduction Ferguson most helpfully avoids its dangers in the amount of room he gives to Kierkegaard’s own voice, with successions of pages given over to citation. Kierkegaard is one of those writers whom it is impossible to systematise and it is better to immerse yourself in his words in order to “travel with him”, as Ferguson aptly puts it. The extracts are well chosen and frequently provide good illustrations of Kierkegaard’s reflections on different themes. The chapter on the cultivation of dissatisfaction, for example, takes us into the discussion on Abraham and Isaac in Fear and Trembling, confronting us with our own temptation to comfortable thinking and the fear that we may censor our own thoughts.

Ferguson also makes topical connections with contemporary life and applies Kierkegaard’s mystical invocation of silence to the chatter of today’s digital world where we know deep down that “all of this noise is not really communicating anything” (p.58). And this takes him to the aspect of Kierkegaard’s thought that he seems most keen to embrace which is the limitations of rationalism: “Over the last 200 years or so we have turned rationalism into something not far off a religion itself, and it would be very easy for us to turn a deaf ear to Kierkegaard’s insistence that all this has something to do with God” (p.72).

So this book is a pleasant, easy read and a practical introduction to a handful of Kierkegaard’s ideas. But I suspect the School of Life wants these life lessons to strengthen our fragile selves in a world where we must make our own meaning. And Ferguson knows that this is a long way from Kierkegaard’s insistence that we must lose ourselves in order to find ourselves in God. He concludes honestly, “I could never follow Kierkegaard… In many respects what he believed in is simply too extreme for me”(p.89). When asked on the radio programme what he thought about Jesus’s injunction to the rich young man to sell his possessions and give the proceeds to the poor, David Cameron said much the same thing. We have come to prefer pre-packaged wisdom to extreme solutions. But Kierkegaard would say that we just lack courage to make the leap of faith.

James Walters is chaplain to the London School of Economics. He has a doctorate from Cambridge University in systematic theology and philosophy of religion and he is the author of Baudrillard and Theology (Continuum 2012). Before coming to LSE, James was a parish priest in North London and prior to ordination he worked for a Member of Parliament. He is now a member of the advisory board to LSE’s Programme for the Study of Religion and Non-Religion and his areas of research include the theology of money and religion in the public sphere. Read more reviews by James.

Posted In: Contributions from LSE Staff and Students | Philosophy and Religion