In Global Food Futures, Brian Gardner sets out to present a scholarly, balanced approach to the contentious area of food production and supply up to 2050 . This text aims to tackle the global food situation in all its totality, from agricultural production, technological advance, dietary concerns, population changes, income trends, environmental issues, government food and agriculture policy, trade, financial markets, macroeconomics and food security. This book introduces the reader to a vast range of inter-disciplinary material to assess the development of future food demand and supply and global food production, writes Elaine Kellman. 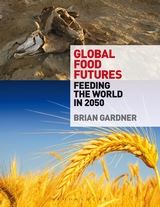 “The power of population is indefinitely greater than the power in the earth to produce subsistence for man.”
– Thomas Malthus: An Essay on the Principle of Population, 1789

It is hard not to be pessimistic about the future of the global food system when faced with the facts. In recent years, food has been in shorter supply than in previous decades, with prices rising to historically high levels. The future outlook is no better. The world’s population is growing faster than expected, with the UN predicting a population of 9.6 billion in 2050. At current levels of growth, there simply will not be enough food.

Global Food Futures takes an optimistic outlook. For Brian Gardner, increasing food production can prevent a Malthusian disaster. However, this focus on increased food production contradicts those that argue that the focus should be on improved distribution and access to food. FAO statistics appear to support such critics: although enough food exists to feed the current 7 billion population, in 2011-13 around 842 million people (around one in eight) were chronically hungry.

Gardner addresses such criticisms in two ways. First, he concedes that access to food is a problem, but pragmatically concludes that without an increase in food production, there will not be enough food to distribute, well or badly (pp.225-226). The second more subtle response is implied throughout Global Food Futures: that the global inequalities and resource shortages that cause problems for food access are also challenges for food production. Accordingly, food production and food distribution are inextricably linked – and should be considered together.

Global Food Futures therefore takes a holistic approach, suggesting not only that global food output can be increased “by bringing more land into production…investing more in research and agricultural development…improving infrastructure in the most food needy countries and…increasing investment in agriculture in those same countries” (p.222), but also detailing the challenges facing the entirety of the global food system. For example, Gardner demonstrates that poverty is a major obstacle to food supply (p.169), considers the relationship between financial markets and food prices (Chapter 4), and delineates the fine balance between food demand and the economy (Chapter 10). Importantly, Gardner also recognises the dependence of the global food system on other resources, for example energy (Chapter 8); land (Chapter 7); and water (pp.211–214).

In addition, climate change poses a serious threat to global food production (Chapter 9). Predicted changes to weather patterns will increase food production potential in the north but reduce it in the south, where it is most needed. Tropical agriculture will also feel the impact, with countries facing shorter growing seasons and crops failing in temperatures over 30 degrees. Accordingly, Gardner suggests there will be a need to shift food production from developing to developed countries and/or to develop new technologies. Either way, it is clear that global co-operation will be key if the world is to feed its population in 2050.

Linked to this focus on global co-operation, Gardner identifies international trade as a possible aid to feeding the world in 2050 (Chapter 3). He urges developed countries to increase their food production as ‘a safety net to fill gaps in production of the most food-needy regions’ (p226). Realistically however, the current trade system will not provide a simple solution to the world’s food needs. Trade in agricultural products remains an acrimonious issue, as demonstrated by the heavily fought negotiations in Bali at the end of 2013, regarding India’s National Food Security Act 2013. And, perhaps affected by this acrimony, Gardner appears to waiver slightly in his reliance on trade, at one point explicitly criticising the dependence of the “most needy countries” on grain imports (p.225).

Gardner interestingly also highlights the importance of the consumer in securing a globally food-secure future. For example, “Buy Local” campaigns can be unhelpful – imported produce can not only have a smaller environmental footprint than its locally grown equivalent (for UK consumers, studies by Lincoln University in New Zealand, and DEFRA show that New Zealand lamb and dairy and Spanish tomatoes all have lower environmental footprints than their UK produced equivalents), but can provide much needed economic and social support to developing countries (pp.204-207). In addition, a reduction in consumer demand for meat and dairy would reduce the strain on global food production (pp.196-197), as would better planning of food usage by consumers: Gardner shockingly states that more energy is used to refrigerate and use food at home than to produce it (p.112).

Perhaps what Gardner doesn’t stress enough is that almost one third of global food production ends up as waste between “farm and fork”. Arguably therefore a priority of any plan to improve global food production and supply should be the reduction of this wastage, which is wastage of energy and resources, as well as food. In addition, given the focus on global co-operation, and the ambitious scope of Global Food Futures, it is perhaps surprising that Gardner does not consider the possibility of an international food agency to secure better international co-operation around food production and supply.

In conclusion, Global Food Futures introduces its reader to a vast range of inter-disciplinary material to assess the development of future food demand and supply and global food production. Given the breadth of topics covered, this is a whistle-stop tour, summarising rather than deeply analysing each topic. Gardner is careful not to lose the reader: using bullet points at the beginning of each chapter, and summarising key points at the end. Introductory and concluding chapters highlight again the headline points. Accordingly, Global Food Futures would be a useful introduction, summary text, or revision guide, for an A-level or undergraduate student. However, it is also an accessible book for any reader seeking an introduction to key issues and future challenges affecting the global food system, and provides the reader with a useful arsenal of facts and figures.