This book sets out to explore sociological debates in relation to culture, taste and value. Simon Stewart argues that sociology can contribute to debates about aesthetic value and to an understanding of how people evaluate, and seeks to contribute to alternative approaches that draw attention to other values and to other ways of valuing. Rachel Sykes finds that the author’s in-depth knowledge of the overlapping principles in processes of rationalization, globalisation and cultural capital lead to a thought-provoking and insightful challenge to long held cultural assumptions that test the boundaries of our subjective leanings. Recommended for students of sociology and cultural studies. 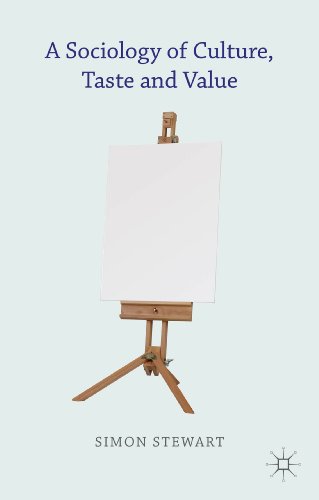 Discussions of taste have often confounded academics. The academy traditionally justifies its attention to cultural objects through the rigorous application of theory and context that gestures toward objectivity. Individual preference is a footnote, if it is mentioned at all, and taste is often framed as a dirty secret, a baser and less critical means of appraisal that cannot be academically controlled.

However, the natural appearance of taste is, as Simon Stewart argues, one of its most misleading qualities. In A Sociology of Culture, Taste and Value, Stewart challenges the “commonsense perspective” that depicts taste as a subjective category to suggest that what we like and dislike evolves from a long and complex relationship between the individual and their social environment. Building on carefully considered readings of Max Weber and Pierre Bourdieu, Stewart considers the creative tension between culture and market forces to account for lesser known sociological debates that view taste as an expression of class and educational background.

The articulation of taste, then, is less a presentation of “natural” impulses and more the appearance of innate preferences that ultimately demarcate social groups. The tension between what is affectively, even bodily, expressed and what is socially imposed is at the heart of the book’s discussion, though the subject of taste is more broadly conceived. Indeed, Stewart is so eager to prove that sociology can engage with questions of aesthetic value that broad, rhetorical inquiries echo throughout. “Why do we like what we like?” Stewart asks in the volume’s dense, but concise, introduction, “Why do we dislike what we dislike?”

The breadth of the study, echoed in the breadth of its central questions, simplifies the “complex meshing of motives that underpins every instance of social action” that the author commits to untangling in the opening pages. Indeed, A Sociology of Culture, Taste and Value builds on Stewart’s research in the minutest structuring of social classes. A senior lecturer in sociology at the University of Portsmouth, his 2010 volume, Culture and the Middle Classes, identified a wide range of characters within the traditionally catch-all “middle classes” to focus on the predominantly affluent, middle-aged, white man whose taste for conspicuous consumption and established cultural forms has become synonymous with the category.

The links between this exploration of the middle class and A Sociology of Culture, Taste and Value is prescient, then, as Stewart loads the concept of taste with a discussion of cultural capital that begins, in Chapter One, with a lengthy discussion of Max Weber’s work on rationalization. Inextricably connected to the fate of cultural values in the twenty-first century, rationalization is synonymous with the threat that the late modern world poses to individuality. Formal rationality, as Weber contended, has been in ascendency for over a century through the development of a modern culture that serves institutions and not individuals. Added to this, Stewart claims that the secondary threat of globalisation has prioritised calculability above aesthetic value and thus adds to the “nullifying predictability” of contemporary existence.

Under the repressive pressure of predictability, however, cultural values rapidly disappear. As Stewart suggests:

[T]hey are repressed, they go into exile, they return in an abhorrent form, whether in the distorted form of religious fundamentalism or in reenchanted forms of cultural consumption, in types of commodity fetishism which would even surprise Marx.

In this vein, Chapter Two also explains how formal rationality increasingly renders aesthetic values irrelevant. Particularly within a culture governed by legal authority, Stewart suggests that bureaucracy favours the rise of the specialist whose elevated position in society subsumes the supremacy of the “cultivated” individual. Whereas “cultivated” members of society previously received a broad education without expertise in a single area, Weber’s philosophy suggested that capitalism is geared towards the specialist whose highly developed knowledge increases the economy of intellectual labour. However, whilst the rise of the expert is in some ways democratising, Stewart equally contends that this process speaks to the wider dehumanisation of society, the petrification of culture, and a feeling of disenchantment that excludes the majority from understanding how the mechanisms of their own society function.

The concluding argument of Chapter Two is based around Weber’s commitment to face the concept of disenchantment. In order to accept the ability of rationalization to return personal agency to social action, the philosopher was also forced to acknowledge the fallacy of progress. This concept then leads neatly to the question “Why Do We Like What We Like?” that frames Chapter Three and opens A Sociology of Culture, Taste and Value to a wider consideration of the objects of culture that Weber and Bourdieu largely neglect. Here, Stewart elaborates on variant forms of cultural capital that are derived from Bourdieu’s earlier findings. A translocal reimagining of artistic achievement has evolved, the author claims, alongside globalisation and represents a defence of diversity that might evade cultural homogenisation.

Cultural evasion, however, seems key to both the strengths and weaknesses of the study. The objects of culture referenced by Stewart are not constitutive of a form of resistance, he claims, but disparate elements in a defence of diversity mounted by the author himself. Equally, for an exploration of taste and value the book is notably devoid of opinion. Although A Sociology of Culture, Taste and Value reads as a defence of the avant-garde and a plea for the preservation of diversity in times of economic hardship, a lack of individual case studies or personal detail in the text itself gestures towards the academic derision of taste that the author’s rigorous dissection of “natural” preference and ability would deny.

This, however, is simply a matter of taste. Overall, this timely volume is a well-rounded reappraisal of taste’s sociological function. Though perhaps, at times, Stewart’s concentration is too deeply and insularly focussed on the tomes of Weber and Bourdieu to truly revolutionise our concept of taste in the present, the author’s in-depth knowledge of the overlapping principles in processes of rationalization, globalisation and cultural capital lead to a thought-provoking and insightful challenge to long held cultural assumptions that test the boundaries of our subjective leanings.

Rachel Sykes is a postgraduate student and teaching assistant at the University of Nottingham where she is currently developing a cultural and literary theory of quietness as a narrative aesthetic. She tweets @rachelizasykes and blogs, informally, here. Read more reviews by Rachel.