Over a period of several centuries, the academic study of risk has evolved as a distinct body of thought, which continues to influence conceptual developments in fields such as economics, management, politics and sociology. Risk: A Study of its Origins, History and Politics aims to provide a detailed study of key turning points in the evolution of society’s understanding of risk. Matthias Beck and Beth Kewell map the political origins and moral reach of some of the most influential ideas associated with risk and uncertainty at specific periods of time. Political historians will find much of interest, writes Maria Zhivitskaya. This book has the potential to make a prominent contribution in its field, for the reason that others can work to fill the gaps the authors leave. 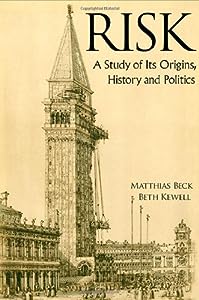 The financial crisis of 2008 has contributed to risk becoming a fashionable topic. This book, however, does not address risk within the world of finance, or specific risk management techniques. Instead, it is about the sociopolitical and historical development of the ‘risk society’, discussed in the 1980s by Ulrich Beck and Anthony Giddens. The authors aim to “provide a chronological classification of cultural and intellectual trends within risk writing” and in order to do so they cover a wide timeframe and selection of topics. Matthias Beck is a Professor of Public Sector Management at Queen’s University, Belfast who has published widely on topics ranging from Public Administration, to Health and Business History. Beth Kewell is a Professor in the Department of Media, Culture and Social Sciences at The University of Stavanger, Norway. Together, their extensive and diverse backgrounds in the field contribute to making Risk: a Study of its Origins, History, and Politics a curious collection of snapshots about the political economy of risk.

Across seven chapters, the book is structured clearly and logically. It reads like a collection of independent papers with an elaborate linking of ideas, showing the intricate connections between different eras and themes in risk writing. The themes range from the development of probability theory in the Italian Renaissance to the ‘anti-enlightenment legacies of the nineteenth century’, to the disaster research in American sociology in the 1920s, and to international relations and US-centric diplomatic crisis management history. The book shows the extent to which conceptions of risk go beyond mathematics and into the social morality. The common thread throughout the book is the focus on homo ludens, who unlike a reductive, utility-maximising homo economicus, also takes morality into account. Homo ludens is a player who is much more than a ‘walking calculator’, because she also chooses whether to include morality in the process of calculation. This makes her potentially ‘culturally corrupt’.

The book opens with a captivating step-by step overview of the history of probability, uncertainty, and risk, starting from the aleatory practices in Egypt circa 3500 BCE, continuing to the work of Pascal, and finally to the rise of a conglomerated stock market in the twentieth century. While the book does not promise a full chronological overview, it does leave the reader wondering whether other relevant events occurred between the time points discussed. The thoughtful conclusion of this historic summary part is that the social discovery of risk contributed to the rise of concepts such as eugenics, xenophobia, and even some aspects of racism, and thus risk can be as much to the detriment of society as to its benefit. The latter chapters show why this conclusion is true, by providing several case studies from the domain of politics, and linking these findings with the development of both domestic and foreign policies.

Taking a broad conception of risk, further chapters mention risk anthropology and explore how fiction and non-fiction literature has “made spurious racial assignations appear reasonable, scientific, and morally appropriate”. These chapters also explain that Social Darwinism (the belief that the biological idea of survival of the fittest can be transposed to the social sphere) led to racial classifications and ‘blame-shifting’, which were underlying political agendas within the context of popular political economy. Additionally, they show how over time, with the introduction of technologies such as nuclear power plants, the idea of risk within policy making has expanded from being just a privilege of technocratic elites to being inspired by a desire to protect civilians and the civil society.

To finish, Beck and Kewell contrast the group of risk society-related theories with those centring on power duality. Risk society theories distinguish between the polluter and the polluted, and are based on the breakdown of assumptions related to technological risks. Risk society literature investigates the social construction of risk as a means by which society deals with uncertainty and ambivalence. In contrast, power duality theories distinguish between wealthy and poorer countries, and assume that “wealth creation within developed or core nations is crucially dependent on the ongoing exploitation of underdeveloped or periphery nations”. Beck and Kewell link these theories with associated risks, such as armed conflicts between exploiter nations and their client states, continued underdevelopment of exploited nations, and local internal wars resulting from lower economic status.

The book’s ambitious goal– to provide a “systematic, historically contextualized exposition of the development of risk as a broad theme within social sciences” is, in the authors’ own words, only partially attained. As a result, the chapters feel more like teasers that leave questions open than systematic reviews. While the book is relatively accessibly written, the authors use lengthy footnotes and the style of their writing is heavy and academic in places; this book certainly does not aim to compete in the “fun science” category intended for general readers. The book is not intended for mainstream business school academics either, but would give a useful reference point for historians of politics looking for new research ideas.

This book has the potential to make a prominent contribution in its field, for the reason that others can work to fill the gaps the authors leave. Indeed, the authors acknowledge the necessary incompleteness of their analysis “if only because we are constrained by the goal of writing an introductory overview of the subject” – which is exactly what they successfully do.

Maria Zhivitskaya is working on her PhD in Risk Management in London School of Economics. Her focus is risk governance and regulation in the financial services institutions. Read more reviews by Maria.