With chapters on London’s housing legacy, regeneration along Stratford High Street, and the experiences of those who were moved out to make way for the Olympic Park, Penny Bernstock’s Olympic Housing is a rich resource for those interested in understanding how housing decisions are made, implemented, governed, and ultimately experienced within the context of a major sporting mega-event, writes William Allen. 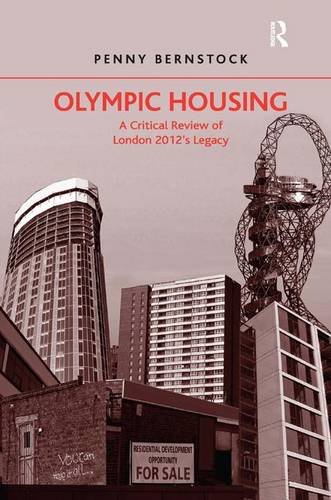 ‘The dream is real – and it is alive’. These words, part of a moving poem written by Team GB’s Paralympic athletics captain Stephen Miller, helped close the 2012 London Paralympic Games by highlighting the achievements of all Olympic athletes and tapping into an ‘Olympic spirit’. But in some respects, the run-up to the 2012 Summer Games gave the impression of an unachievable fantasy: last-minute disorganisation and budget overruns, among other problems, seemed to threaten the success of the Games. Indeed, peeling back the slick montages reveals that all kinds of international sporting mega-events – but particularly Olympic Games which command incredible investment while trading on supposed ‘Olympic values’ of fairness – are often vehicles for failed urban development and increasing inequality in many sectors.

Housing is one such sector that has been impacted by the London Games. In her new book, Olympic Housing: A Critical Review of London 2012’s Legacy, Penny Bernstock uses numerous case studies around London to examine how the Games have changed the city’s housing landscape – and not always for the better. Aimed at the gaps between housing intentions and outcomes occurring at institutional as well as street levels, Bernstock’s detailed analysis provides an important platform on which debates about the long-term impacts of mega-sporting events can occur.

One component of this platform involves documenting other host cities’ housing experiences. In her first chapter, Bernstock provides a comprehensive overview of the housing decisions taken in each Summer Games city since 1992. It reveals that some of the stated promises of London 2012 – such as converting athletes’ villages into housing after the Games – were actually common features of previous cities’ plans. For example, Barcelona’s (1992) athletes’ village was converted into flats for about 5,700 residents. Meanwhile, Athens’ (2004) plan for its village was somewhat unique in explicitly targeting low-income workers by selling its 2,292 units at half of market value – although in practice this process has been very slow due to poor communication about service provision. The review also shows how forced eviction and mistreatment of homeless people persisted across consecutive Games, particularly in the cases of Atlanta 1996 where private sector interests led housing investment and Beijing 2008 where an estimated 1.5 million people were displaced and about 60 existing villages demolished.

Against this historical backdrop, Bernstock turns attention to London’s housing experience prior to and during the 2012 Games. Chapter three is an especially useful overview of the trends in housing need, house prices, policies towards homeless groups, and governance that contributed to the ways that the concept of ‘legacy’ was enacted in four key boroughs: Newham, Hackney, Tower Hamlets, and Waltham Forest. Secondary analysis of data like the Index of Multiple Deprivation (IMD) shows that while these ‘legacy boroughs’ continue to face some of the highest levels of overcrowding and unemployment in both London and the country, they also remain highly unaffordable compared to local incomes. Furthermore, evidence from local organisations dealing with homelessness indicates that instances of rough sleeping in these boroughs increased from 2009 to 2012. Governance surrounding housing legacy and implementation of policies has also undergone several shifts.

Notably, the concept of ‘convergence’, or the stated intention for the ‘life chances’ of legacy borough residents to equal those of the rest of London within two decades, also underwent changes to include targets, indicators, and methodologies for tracking implementation. Creation of a new agency, the London Legacy Mayoral Development Corporation (LLMDC), which was charged with managing competing agendas surrounding legacy, also aimed to bolster the likelihood of achieving convergence. But, observing that these plans crucially did not include budget allocations, Bernstock concludes that they ‘could be perceived as a wish list rather than a viable strategy for the reduction of deprivation in east London’ (p. 88).

It is this gap between policy and implementation with regard to post-Olympics housing that stands to colour the future of East London the most, according to Bernstock. Her concluding chapter emphasises that, despite extensive institutional investment such as the creation of the London Legacy Development Corporation (LLDC), there will continue to be an imperative to ‘square the circle in a context of fiscal austerity’ (p. 198). She widens the book’s scope from an empirical set of studies centred on the legacy boroughs to a critical evaluation of the link between housing and welfare in general. The ‘big picture’ presented in the end, that ‘what is needed is a radical rethink of how we fund and deliver affordable housing whilst simultaneously reducing welfare dependency’ (p. 201), naturally flows from the critical evidence presented in previous chapters.

Bernstock’s narrative, supported by detailed qualitative interviewing and observation throughout East London, provides a valuable window into the impacts and mechanisms by which housing policies have been made in the time leading up to – as well as during – the London Olympics. As a ‘critical review’, it succeeds in this regard. However, equally critical discussion about the very concept of ‘legacy’ and how this links with the stated values of Olympism would have amplified the significance of the book’s main conclusions. While some of chapter three documents the multitude of agencies charged with delivering London’s legacy, there is less extended discussion about what legacy means, who is (or is not) represented in these decisions, and why it continues to hold so much rhetorical sway. Borrowing from Miller’s poem, it is also important to ask whose dreams are alive–as well as which kinds of dreams are allowed to be dreamed at all. In this sense, Bernstock’s case study fits well alongside titles with a broader scope like Maurice Roche’s Mega-Events and Modernity: Olympics and Expos in the Growth of Global Culture (2002).

In total, Olympic Housing is a rich resource for those interested in understanding how housing decisions are made, implemented, governed, and ultimately experienced within the context of a major sporting mega-event.