Reformer, rebel, political activist; amongst his many achievements E D Morel directed the first great humanitarian campaign of the 20th Century which brought King Leopold II of Belgium’s brutal and genocidal regime in the Congo to an end. Elaine Kellman recommends this biography to those interested in history, politics and international relations, as well as more specifically the history of the Congo, and the WW1. 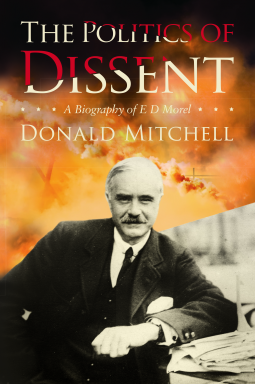 Donald Mitchell’s biography of E D Morel (1873-1924), The Politics of Dissent, comes at a time when Morel has been almost forgotten, his memory and message “extinguished by silence”. The Politics of Dissent attempts to redress this, presenting Morel as a “reformer; rebel; political activist”. In particular, The Politics of Dissent focuses on two main events in Morel’s life, first, Morel’s popular success against King Leopold II’s regime in the Congo and second, his less popular anti-war campaign during World War One (WW1) – as a result of which Morel was vilified in the press, and ultimately imprisoned.

The Politics of Dissent therefore begins with a focus on Morel’s campaign against King Leopold II’s regime in the Congo. Leopold, acting in his private capacity, was the “owner” of the infamous “Congo Free State”. Ignoring conditions agreed at the Berlin Conference, Leopold ran the Congo for his own personal gain, using a mercenary force to turn the Congo into a “massive labour camp”. Resources were plundered and innocent people killed in a regime of “legalized robbery enforced by violence”.

At the time, the appalling “orgy of brutality inflicted upon the Congolese people” was unknown to the general public (p23). However, while examining ship manifestos as part of his job at a Liverpool shipping firm, Morel became aware that a fraud was being perpetrated. He noticed that the shipments of ivory and rubber from the Congo to Antwerp greatly exceeded the published figures for export. In addition, none of the wealth that was being generated was returning to the Congo. In fact, the ships returning to the Congo contained only guns, rifles and other weapons assigned to the state or trading countries. Mitchell writes that it was “plain that the guns and ammunition were being used for the subjugation and exploitation of the native population….and…what [Morel] had unearthed was…a system of slavery” (p22).

Morel wrote a series of articles exposing this discovery (p24). Forced to resign from his job, Morel became a full-time journalist and after a few years founded his own newspaper. Perhaps most importantly, he also established the Congo Reform Association (“CRA”), “to fight the new African slavery” and campaign against Leopold (Chapter 3).

While Morel’s dedication to exposing Leopold’s regime cannot be criticized, his suggested solution was for the Congo to be partitioned between France, Germany and Britain (p.50). As noted by Didier Gondola in his book History of the Congo, this was an unfortunate attachment to the colonial ideas of the time. Mitchell defends Morel from this accusation however, arguing that Morel condemned colonial administrative policies, including the sequestration of land, the imposition of Christianity and the unfair trading practices that bled countries under colonial power of their resources (p47).

In any event, to avoid accusations that the movement for reform was a front for other European countries to acquire the Congo (an area some eighty times the size of Belgium and the sixth most mineral rich country in Africa (p.15)), the CRA eventually adopted the recommendation that the Congo be transferred from Leopold to Belgium (p50). This transfer finally happened in 1908, however this was not without cost, with Leopold paid £20 million, in “testimony of his great sacrifice in favour of the Congo created by him’ (p64).

The transfer must have been an anti-climax for Morel. Morel was strongly in favour of “native rights to land and control over their produce” and although Leopold was ousted, the Congolese were granted “neither free labour, free trade, nor recognition of tribal and communal rights to the land”. Morel, however, interpreted the transfer of the Congo to Belgium as a victory, with Mitchell commenting that “for someone who had toiled so persistently…it must have been almost impossible to admit that the enterprise had come so far from satisfactory conclusion” (p73-74).

Following his work in relation to the Congo, Morel’s focus moved to Europe, and his campaigning changed from a “largely single strand issue with almost universal support” to more contentious matters. In particular, Morel became increasingly critical of the Foreign Secretary and the UK government (p89) and he also became an “implacable opponent” to the impending war, criticizing the secret diplomacy and secret treaties existing between France and England and calling for the democratization of foreign policy – issues that are just as important today. It was also around this time that Morel was asked to become secretary to a new anti-war organisation, the Union of Democratic Control (UDC) (Chapters 6-7).

Mitchell blames Morel’s stance in the years preceding and during WW1 for Morel’s subsequent fall from favour. Dogmatically outspoken and apparently on a directly confrontational course with the UK government, Morel became increasingly isolated as patriotic war fervor rose around him. As the war progressed the UDC was attacked as ‘pro-German’, and ‘defeatist’ with Morel himself accused of being a ‘traitor’ (p122). Eventually, Morel was imprisoned for 6 months under the Defence of the Realm Act purportedly for inciting a contact to send an anti-war pamphlet to Switzerland (Chapter 9).

Morel was not silenced by his time in prison, and Mitchell’s discussion of Morels’ continued campaigning in the aftermath of the war is particularly interesting (chapter 11). In retrospect, the decision to impose collective guilt on Germany following WW1 was, as predicted by Morel, a fateful one. In Article 231 of the Treaty of Versailles, the famous “war guilt” clause, Germany was forced to accept sole responsibility for the war and the damage and loss caused to the allies as a result of the war. This provoked huge resentment in Germany and Morel vehemently disagreed not only with this clause, but the Treaty of Versailles as a whole.

Although debate remains as to whether the Treaty of Versailles can be blamed for the carnage of World War Two (p156), the Treaty’s legacy has changed the way international lawyers and policy makers approach the question of justice in the aftermath of conflict. Ruth Teitel, for example, notes the discrediting of collective guilt: in the aftermath of today’s wars, it is individuals, rather than states, that face responsibility for wartime acts. And, this responsibility is now understood in terms of deterrence and reconciliation rather than retribution. In this regard, some of Morel’s views were perhaps ahead of their time.

In conclusion, overall this is a detailed and well-researched biography. However, throughout the Dissent of Politics it is clear that Mitchell is a fan of Morel. Perhaps for this reason, although acknowledging Morel’s weaknesses, at times Mitchell seeks to justify Morel’s actions rather than letting the facts speak for themselves. For example, a vituperative campaign Morel ran against a former employer is explained because Morel needed “steely determination to succeed and a conviction in the rightness of his cause” (p30). Morel’s exclusive focus on the Congo (despite the simultaneous plundering of other nations without regard for their peoples or resources by colonial powers) is explained by his “appreciation of campaigning realities” (p74); and his racist pamphlets and rants, regarding the use of African troops by France in Germany are explained as “driven by his unwavering determination to resist the enforcement of the Versailles Treaty, and…his disgust at the French use of African soldiers as pawns in the propaganda game” (p164).

Despite Morel’s occasional failings, he is a deserving candidate for Mitchell’s biography and The Politics of Dissent contains an important wealth of detail. The historical background Mitchell provides throughout the book contextualizes Morel’s activities and allows Mitchell to make the case for the continuing relevance of Morel’s calls for social justice, political transparency and global peace. This book is therefore recommended to those interested in history, politics and international relations, as well as more specifically the history of the Congo, and the WW1.