Annette Condello’s The Architecture of Luxury proposes that in Western societies the growth of the leisure classes and their desire for various settings for pleasure has resulted in a constantly increasing level of ‘luxury’ sought within everyday architecture. Zeynep Ceren Akyüz recommends this interesting read to architectural historians and curious sociologists.

The Architecture of Luxury aims to uncover the physical, social, and moral attributes of luxury, in the context of increasing wealth amongst the leisure classes across Europe and the US. The concept of luxury within architecture renders disparate connotations for architects, power elites, and the public, but here Annette Condello – a Lecturer in Architecture at Curtin University, Australia – gracefully traces the concept of an architecture of luxury from antiquity to modern times. Condello’s six historical categories – Sybaritic, Lucullan, architectural excess, rustic, neo European and modern – take readers on an exciting journey through the theory, myths, lifestyles and curious devices and inventions of Western Europe, Latin America to the United States. Condello analyses constructions and lifestyles and characterises as luxurious anything which is “beyond necessity”, such as the usage of rare or imported European materials and ornaments in the New World, the creation of new-fangled spaces for exuberant banquets in French Renaissance rustic country houses, and expensive glass skyscrapers in modern Chicago.

The book is structured so that each chapter takes on one of these six categories, along with a clear introduction that is useful for readers unfamiliar with the subject. It is here that readers are introduced to key theories around luxury, such as Veblen’s notion of conspicuous consumption, and we are able to grasp what luxury and the luxurious stand for.

Luxury has often been associated with unethical behaviour and considered as morally distasteful. Condello writes that the book will initially handle luxury differently; as “something auspicious”, “an unqualified benefit in its own right” or “something rare and present within strict limits” (p. 3, 4). However, the book reaches the convincing conclusion that the perception of “admissible” luxury is time and place dependent. The existence of morally and aesthetically “impaired” architecture continues to exist by recreating and repeating metaphors of evil and self-indulgent constructions and habits. The narrative of the book ultimately leads to the observation that “a building can be an architectural masterpiece but it can fail ethically” (p. 6).

Each of the main chapters draws on diverse sources and examples across wide geographic and chronological lines. Readers take in the facts and myths of the Greek colony Sybaris, located in southern Italy, to the cities of Florence and Venice during the Renaissance, and then towards France, where Condello discusses the relevance of combining the luxurious space in architecture and the “rustification” of buildings.

One of the most interesting chapters is the second, “Lucullan Luxury”, which dwells upon ancient Rome, particularly around the Roman Governor Lucullus and the imitations of two other Roman emperors, Nero and Hadrian. The condemnation of private luxury, particularly by Pliny and Cicero, in contrast to the appreciation of “public magnificence” is a critical point of this chapter. Marbled masterpieces like the Forum of Augustus and the Grand Colosseum were key examples of admissible luxury at the time, by virtue of “providing labour to the masses and being available to the general public for entertainment purposes” (p. 44). In contrast, the introduction of “sumptuary laws” by the Roman Senate, particularly after Lucullus’ time, to control private luxury and excessive displays had momentous repercussions in ancient Rome and subsequent periods. However, the laws did not prevent adjectives like “Lucullan” from coming into fruition alongside “sybaritic”; as the term “sybarite” (coined by Plato, meaning a person with culinary and luxurious indulgences) originated from Sybaris, it is believed that their excesses concerning the size of constructions, ornaments, and furnishings led to their ruin, illustrating for the reader the myths and applications of luxury in architecture.

The fifth chapter, “Neo-European Luxury”, also caught my eye. Here Condello focuses on Neo-European luxury and vividly reflects on the influence of European explorers on the architecture of the New World. In pursuit of El Dorado, the myth of the “gilded” man and/or city, European explorers in the 1500s brought with them their own myths and representations of luxury to the New World, from Recife and the Amazon region in Brazil to Mexico City. This led to the destruction of Amazon indigenous huts and the Aztec city of Tenochtitlan, and their replacement with European constructions and features. The author discusses throughout this chapter the immoral aspects of these actions and how the implementation of an architecture of luxury served to construct a sense of identity and to demonstrate power over indigenous people.

The final chapter, “The Dispersal of Modern Luxury”, is equally compelling, with its focus on the dispersal of modern luxury on the prairie via suburban houses and gardens. It also addresses The World’s Columbian Exposition of 1893 and how it transformed Chicago into a modern destination. This chapter introduces commercial skyscrapers as novel buildings that symbolize material excess in construction, with their interiors celebrating consumption. This period epitomises a rupture from the European tradition in a number of ways, such as “nude” skyscrapers without an ornamental mark being considered luxurious. Despite this suburban expansion and skyscrapers being a symbol of luxury, for some they represent a permissible luxury considering their contribution to the solution of overcrowded cities and immigration.

By relying on a wide range of resources such as classical texts, poems, novels, paintings and photos, Condello convincingly argues for a continuum of luxury and shows that luxury continues to be creative in architecture (p. 8). However, by mostly looking at its softer face, she neglects the darker part; the “destructive” capacity of the luxury within the architecture. Examples include iconic towers, luxury flats in “gentrified” city areas, and mega event infrastructures. Despite weaknesses around amalgamating the theories into the cases, the book is above all a very inspiring read which should stimulate further and more critical debates.

Zeynep Ceren Akyüz is a PhD student at University of Ankara, in the Urban and Environmental Sciences Department. Currently, she is a visiting research student in Development Studies at SOAS, University of London. Her research focuses on the re-scaling of the state in Turkey. She holds a first degree from Political Science and Public Administration and a MSc. in Middle East Studies from Middle East Technical University. 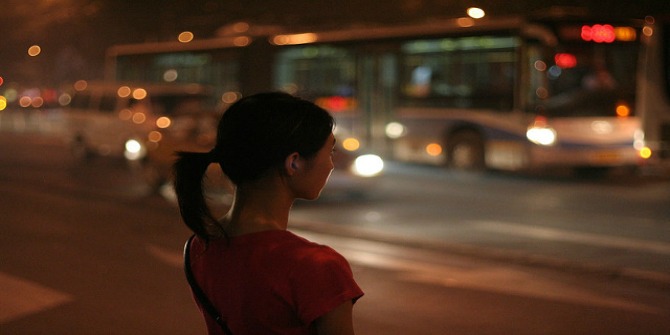