Who are our public intellectuals? Are they needed in a democracy? These and other questions are answered in Raphael Sassower’s historically-informed survey of the role of public intellectuals in western democracies.  Claire Forbes finds that this is a thought provoking read and will appeal to anyone interested in philosophy, intellectualism and public engagement. What does it mean to be an intellectual? There can be little doubt that at some time, all thinkers have paused to ruminate upon this question, ultimately leading to self-reflections that query the form and function of their own scholarship. Yet, as the West becomes ever more consumerist and, as many would claim, anti-intellectualised, it would perhaps be opportune to turn our gaze outward, to contemplate in more general terms what it means to be a public intellectual.

Indeed, who are our public intellectuals? What is their role? Are they necessary and/or desirable in contemporary western society? If so, how should intellectual leaders engage with their public? How should their pursuits be funded?

It is precisely these perplexing questions that Raphael Sassower seeks to address in The Price of Public Intellectuals. Drawing upon both historical and contemporary accounts, Sassower not only creates a typology with which to define public intellectuals, he also re-examines the differing and changing approaches and positions adopted by intellectuals within the public realm.

Sassower begins by problematizing the Quaker motto of ‘speaking truth to power’ (p. 2). Although acknowledging that the publicly engaged intellectual has a responsibility or ‘a moral duty’ (p. 2) to reveal the truth to his or her audience, Sassower believes the dichotomy between the intellectual and the politician to be limiting. To shatter this myth of the ‘truth seeker’ (p. 1) versus those in power, he refers the reader to the Greek archetypes of Socrates’ Trial and Plato’s Republic.

In juxtaposing Socrates’ martyrdom with Plato’s vision of the ‘philosopher-king’ (p. 7), Sassower invites the reader to move away from the image of the solitary truth seeker striving against the state and political institutions. Instead, he points to a utopia where ‘truth is power; power is truth’ (p. 7), where the intellectual is also leader. Whilst conceding that this vision of the philosopher-king is ‘ideal’ and therefore ‘unlikely’ (p. 9), Sassower nonetheless maintains that this is how a state could be ruled: ‘It must be set in motion as an alternative to the lone philosopher, Socrates, speaking his mind and suffering the consequences; it’s an image of what would be an ideal if all our political leaders were philosophically minded and our philosophers were politically sensible’ (p. 9).

One particularly interesting conception includes prominent hactivists, bloggers and celebrities. To illustrate his point, Sassower refers to US hip hop group Public Enemy and their 1989 single ‘Fight the Power’: ‘With short verses and poetic presentation, Public Enemy expresses what others feel: a complete disenfranchisement despite the American rhetoric of equality and freedom’ (p. 56). According to Sassower, artists such as Public Enemy are public intellectuals not simply because they voice the malaise of the common man as a sort of Socratic spokesperson or truth bringer, but also because of their analytical insight, coupled with their public platform and appeal: ‘If by intellectuals we mean here Socrates’ ‘philosophical intelligence’ and if by ‘philosophical intelligence’ we mean critique, then this group of rappers is indeed critical. Add to that their public exposure, and one can easily label them as public intellectuals’ (p. 56). By including rappers and other figures within popular culture within his typology, Sassower demonstrates just how the public arena, its debates and discussions have evolved over time, resulting in a new order of public intellectuals, who act as a conduit between professionalised academics and the general public.

Having considered the labels linked to public intellectuals as individuals, Sassower begins chapter 3 by examining the history and conditions that have contributed to the demise of the public intellectual as a group. One contributing factor that Sassower ascribes to this erosion of the publically engaged thinker is American anti-intellectualism. He contends that ‘“can-do” American ingenuity, a pragmatic mindset that conquers obstacles by performing well practical tasks – working the land and expanding westward – is much more appreciated than philosophical reflections about meaning and truth’ (p. 59). He continues by suggesting that a propensity to entrepreneurship within the American psyche and the subsequent importance of the marketplace has in effect marginalised the thinker: ‘Nothing happens in America without a sale of sorts, so that everyone becomes an inadvertent salesperson […] The marketplace may have become more virtual by the 21st century, but it’s still what dominates American culture and outlook, defines our tastes and preferences, and relegates to a secondary position the life of the mind’ (p. 63). Could it be that, as Sassower suggests, the sage has been ousted by the celebrity? Rather than focus upon individuals, Sassower maintains that it is ‘the glory days of intellectuals as a class that is at stake here, rather than individual heroes and heroines whose lasting impression remains indelible in our memories’ (p. 69). As such, he moves forward by considering four approaches relating to public intellectuals as a class or group : sociological, political, psychological and economic, before finishing with a review of three contemporary lists of public intellectuals and an analysis of the criteria that has been used to compile them.

The Price of Public Intellectuals is a thought provoking read and will appeal to anyone interested in philosophy, intellectualism and public engagement. As well as deepening considerations regarding the complex question of what it means to be a public intellectual, Sassower provides the reader with a timely reminder of the importance of the publicly engaged thinker and commentator, whether gadfly or prophet, blogger or fool. The book concludes with a series of recommendations to inspire academics and intellectuals to connect with public debate in a dynamic way. Its closing lines lay down a challenge to the reader to engage: If not now, when? And if not I, who?’ (p. 122). 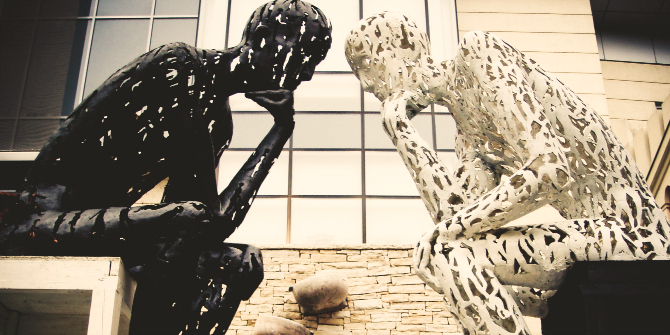