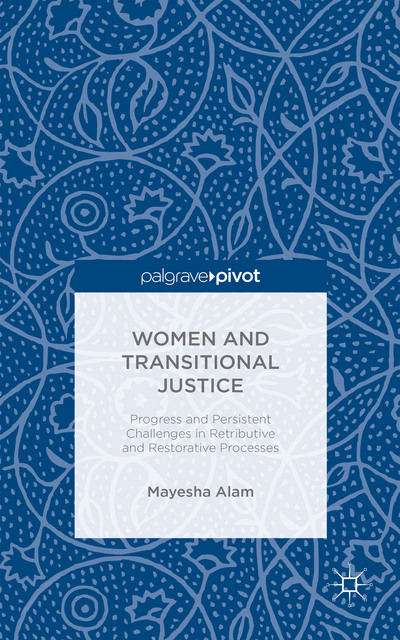 Hillary Clinton once said ‘too many women in too many countries speak the same language … of silence’. In Women and Transitional Justice, Mayesha Alam observes that none of the international post-World War II criminal tribunals have paid sufficient attention to gender issues, and that women’s experiences have not been made not a priority until recently, when the realization that women’s harm does not exist in a vacuum eventually came to the attention of the international community.

Alam emphasizes that the significance of women’s participation in transitional justice goes beyond the scope of female victims or witnesses, as women can also be ‘spoilers of conflict, perpetrators of violence, agents of peace, combatants’ (p.87). Likewise, she deliberates on various roles through which women can demonstrate their presence in justice processes, such as judges and lawyers, and trauma and counselling staff. For instance, she gives an example of female translators whose presence can reinforce confidence in female witnesses, as is exemplified in the case of the International Criminal Tribunal for Yugoslavia. Therefore, gender mainstreaming ‘is about paying attention to and prioritizing the experiences of both men and women, but this should not be conflated with assuming that the experiences of men and women are identical or equal’ (p.45).

Of course, it is sadly often the case that women have been the victims and survivors in the cases under review here. Atrocious human rights abuses, such as genocide, ethnic cleansing, war crimes, mass rape, and crimes of aggression have all been observed. Sexual violence, in its most prevailing form of rape, in the transitional justice context happens for various reasons and may present different meanings in different societies: ‘as sexual relief for the perpetrators, as a means to forcibly impregnate as part of a larger ethnic cleansing mission, as a tactic to instil fear and terror within the population, as punishment for the actions of the women’s male counterparts’ (p.23), writes Alam.

Alam does not attempt to pursue a romantic vision of international standards regarding transitional justice. She knows when to pause, reflect, and sound critical. Having acknowledged a plethora of international human rights doctrines, agreements, and treaties, she does not overburden the reader to list and discuss them all. Instead, she recognizes that creating gendered perspectives within the conventional justice processes is a continuous and slow process that might be hampered by the complexity and ambiguity of the concepts that need to be translated into individual contexts.

Alam highlights that although lack of political will may be one of the factors that contribute to the legislative failures in retributive transitional justice processes, legal practice still remains highly context-dependent. Despite the restorative justice potential that has been shown to be powerful in transitional justice societies, the reality is that not all victims’ needs can be met, not all conflicts solved, and not all harm reversed. In addition, she points out the risks of hastily-applied restorative solutions in the given contexts.

Although each of the four tribunal cases is meticulously delineated, Alam gives special attention to the Bangladesh case, defined as a failed experiment of transitional justice. Chapter 4, “The International Crimes Tribunal for Bangladesh: A Delayed, Politicized, and Self-Limiting Experiment in Transitional Justice”, not only illustrates the reasons for this particular failure but interestingly presents a broader framework for analysis in relation to gendered perspectives on transitional justice. Alam admits to drawing on her parents’ personal experiences of the 1971 Bangladesh Liberation War that had originally triggered her interests in human rights. The Bangladeshi War for Independence was a horrendous and violent conflict that lasted from March to December 1971. Alam considers this conflict as an exceptional case of ‘forgotten genocide’ where women were the principle targets of sexual attacks and abuse from Pakistani military and their Bengali abettors. The contextualisation of the Bangladesh case study is strengthened by the inclusion of the story of one of the female survivors, Ferdousi Priyobhashinee.

Alam argues on page 64 that: ‘unlike in some other places such as Rwanda or Yugoslavia, where peace and justice were pursued within close succession of each other, in Bangladesh, there was a trade-off for peace that overlooked justice’. The International Crimes Tribunal for Bangladesh was established in 2010; 40 years after the outburst of the conflict. Thus, the Tribunal’s potential was at the outset limited to deliver somewhat ‘delayed justice’ that lacked thoughtful inclusive justice processes where women’s wartime experiences could have been accurately recognized.

Alam highlights the reasons as to why the post-conflict formal justice measures in Bangladesh lacked legitimacy among much of the public and international community. Firstly, many perpetrators were given amnesty or even entered the Bangladeshi political scene and this must have led to the lack of political support to deal with the past. Moreover, public maladies and obstacles such as leadership shortcomings, corruption, political instability, economic challenges, lack of legal resources, non-inclusive nature of the proceedings but also societal limitations (like the fear to disclose rape) successfully prevented from holding the perpetrators accountable and victims’ stories finally heard. Nonetheless, she reports that for women partial justice sometimes is preferable than no justice at all.

The Bangladesh context provides an interesting case to examine a number of substitute measures that were implemented in order to make amends. Initiatives such as locally operated peoples’ tribunals, the establishment of the Liberation War Museum or post-conflict research and photography, aimed at filling the void and incorporating women’s voices. In addition, Alam suggests that there are a number of other activities that could further break the cycle of salience, such as greater role for compensation schemes, public apologies, or media influence, even in the form of televised court sessions.

Women and Transitional Justice is a timely and well thought through academic publication that tactfully expands the scope of highly complex issues. At the end of the book, the reader is left with carefully explained definitions, four interestingly contextualised transitional justice cases, and examples of the system’s deficiencies and failures made clear. All of this with the purpose of emphasizing once again that women’s participation in transitional justice processes does not always translate to women being present, visible, and first and foremost heard.

Anna Matczak is a Doctoral Researcher at the Department of Sociology at the London School of Economics. She also holds a MSc in Social Policy (Research) from the LSE and a MA in Social Policy from the University of Warsaw. Her doctoral research relates to attitudes of lay people in Poland to victim offender mediation as these attitudes can shed light on the viability of restorative approaches to justice. Alongside her doctoral studies she has worked as a qualified court and police interpreter in the UK. She tweets @MatczakAnia and her academic profile is available at lse.academia.edu/AnnaMatczak.