Carrie Dunn’s book shows that there are some unique facets of the female football fan experience, including a strong engagement with the new cooperative supporters’ trust movement, and fascinating negotiations of identity within this male-dominated world. Sierra Williams finds that this book will challenge readers to think about the fluid nature of identity, behaviour and practice, not just for individual communities but for their institutions as well. 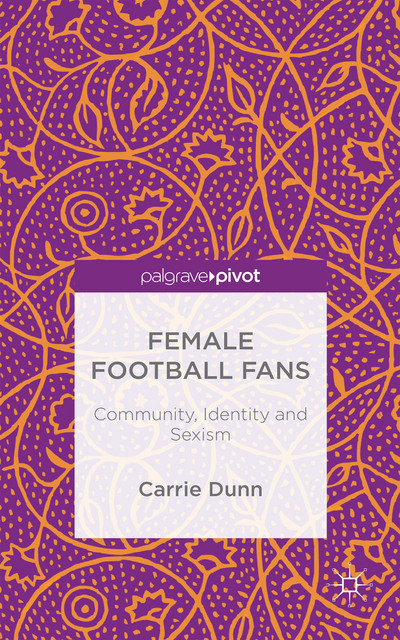 I am an Arsenal fan. It is a primary identity marker and a time-consuming and expensive hobby around which I organise my life. I grew up in California – 5,437 miles away from North London. I now live in a flat with three views of the Arsenal football stadium. I can hear with crisp clarity every chant, boo and goal-scoring cheer (yes, it has occasionally happened this season). Such is the modern, global game that a kid from Los Angeles could still cultivate such a strongly-held identity around a seemingly foreign concept.

Because of this, it has been very clear to me over the years that football is more than just a game; it is a social institution, influenced by and an influencer of wider social norms, learned behaviours and practices. A ‘normal’ fan is presumably one that exemplifies all these traits. But do all fans share such an equal stake in defining ‘normal’ for the community? As a woman and a non-English fan, I imagine I’ve have had to negotiate and reconcile normality more than the average voice on the terraces or in the pub. Although my passionate following rarely affords time for sociological reflection on the matter, last month a professional team in the US tweeted a wake-up call that does well to portray the degree of institutional sexism still faced by supporters. For a modern institution, football fandom is in sore need of an equaliser.

It is with this background that I enthusiastically read Carrie Dunn’s Female Football Fans: Community, Identity and Sexism. The short but comprehensive book draws on a series of in-depth interviews with English women who identify as supporters of various English clubs. These narratives each help to convey the range of voices largely left out of the contemporary understanding of football fandom. The experiences, behaviours and practices within were all deeply familiar to me and as such I read this book not so much as a social scientist, but as the researched. Whilst I did not personally contribute to any of the interviews, I could find bits of my own narrative in nearly every one of the chapters.

Dunn’s methodology relies on in-depth responsive interviews, analysed to establish overarching themes via an ‘open coding’ approach. This design aims both to elicit women’s experiences in their own words and also to assess the wider institutional influence of external forces on female fans. As is standard for Palgrave Pivot titles, there are seven short chapters, each of which could be standalone journal articles. The bulk research chapters focus broadly on identity (chapter three), behaviour (chapter four), activism (chapter five) and perception (chapter six) of female football fans. The chapters are all driven by strong narratives, perhaps due to the participative methodology and arguably also shaped by Dunn’s own background in journalism. Either way, it makes for an extremely readable and relatable text. She also stresses in the early chapters the highly subjective nature of this research, noting in her methodology chapter “the researcher’s specific situation within the domain under investigation will affect the themes they identify and assess as the most important, interesting or significant.”

Of particular interest for me was chapter five which looks in close detail at the significance of the supporter’s trust movement in the lives of female football fans. Whilst modern football is typically portrayed as a corporate hierarchy with multi-billion pound deals made behind closed doors (let alone the corruption informing those deals), football actually has deep social, communal and even democratic roots. Supporters’ trusts have been a particular active response to the increasing isolation of the corporate takeover of English football. And within this democratic framework, supporters’ trusts have been an encouraging place for women to achieve equal social footing to their male counterparts. On the other hand, there were also experiences articulated that suggested some trusts functioned more or less as old boys clubs, where women were routinely sidelined to ‘supportive’, domestic roles within the trust.

The word fan connotes a degree of positive experience and enjoyment. My experience of fandom doesn’t exactly match with this. And not just because the Arsenal are playing so poorly at the moment. It is clear from the narratives in Female Football Fans that passionate support of any football team, at least in English leagues where fixtures are consistent and competitive, rarely affords the luxury to dwell on the positives. This point was made all the more apparent with passages on the extent of social exclusion felt that I could immediately identify with,

As a female fan, you’re disregarded, you know, by fellow fans, not at the club, but if I’m in the pub with my boyfriend and his friends, or people in the office and maybe they don’t know you, and you express an opinion about football, it’s just disregarded immediately.

It is easy for me to dwell on the many negatives in football culture and the reluctant acceptance of the status quo shared in these pages. But this book challenges me to think about the fluid nature of identity, behaviour and practice, not just for individual communities but for their institutions as well.

And maybe things more widely are improving. 2014 might even be remembered as the year of the female football fan. Amy Lawrence, author of the thrilling book Invincible: Inside Arsenal’s Unbeaten 2003-2004 Season, has just won the Football Supporters’ Federation Writer of the Year award. Ireland’s Stephanie Roche was nominated for FIFA’s Goal of the Year (and what a goal!). And for every stupid tweet like the one from Orlando City, there are many more calling out sexism on social media, in the stadiums and down the pub. Long may it continue.

Sierra Williams is Community Manager at PeerJ, the open access publisher of biology, computer science and chemistry journals including PeerJ - the Journal of Life and Environmental Science. Sierra is co-author of Communicating Your Research with Social Media: A Practical Guide to Using Blogs, Podcasts, Data Visualisations and Video. She tweets @sn_will and shares pictures of London trees on Instagram @trees_london.