For anybody interested in water security, its intricate links with other forms of security (like food), and the threats water stress poses to the South Asian region in general and India in particular, this book is a must read, finds Sudhanshu Sharma. 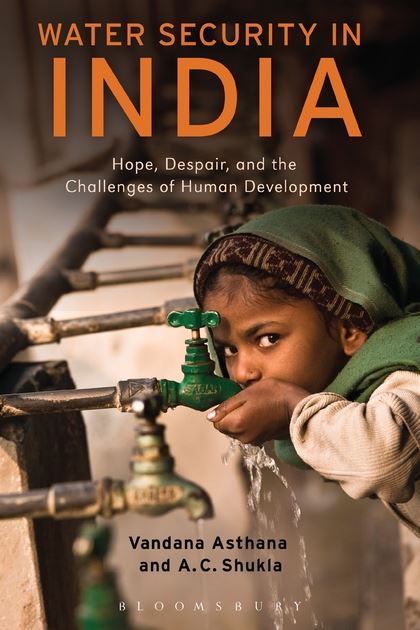 Water Security in India: Hope, Despair, and the Challenges of Human Development. Vandana Asthana and A. C. Shukla. Bloomsbury. 2014.

Water is a pre-condition for human life for which there is no substitute. Still, water scarcity is the reality of life for one-fifth of the world population. Water Security in India: Hope, Despair, and the Challenges of Human Development highlights the importance of Water Security in the broader context of Human Security, and views it from the perspectives of human development and national security. It makes a compelling and data-driven case for waking up to the alarming realities of water challenges faced by the Indian subcontinent.

Structurally, the book is divided into three parts. In the first part, the authors begin by challenging the conventional view of national security which seeks to secure the ‘state’ through military power. The central argument is that state-centric security approach which aims to safeguard the state loses its salience when the state’s constituents – the people – ‘are steeped in poverty, lack water access and sanitation, and face hunger, malnutrition, and illiteracy’ (p.2). An alternate approach to national security is human security, of which water security is a subset and the focus of the book. The first section navigates through many definitions of ‘water security’ and establishes that availability, quality and access to water are central elements of water security in any region. The rest of the section is a detailed account of India’s water resources which lays the groundwork for further discussion.

In the second part, the authors explore in detail, through three chapters packed with innumerable facts and figures, the factors contributing to India’s water insecurity: agriculture and inefficient irrigation systems, rising demand for water due to rapid industrialisation, urbanization and population growth, and vulnerability of climate change. These chapters are a definitive source of information for anybody interested in understanding the causes of water insecurity in India.

The last chapter of this section, “Policy and Institutional Driver”, is probably the strongest. It explores the role of law and regulation in providing water security. In terms of water law, India’s problem is two-pronged. Firstly, the water law in India is a vestige of British colonial legislation and lacks a comprehensive framework. It is constituted of a number of formal and informal rules of engagement with water. While reviewing the proposed National Water Policy of 2012, which proposes an overarching legal framework for water in India, the authors point out that the principles of ecology, equity, justice, devolution of authority and data transparency are weakly articulated and inadequate. Secondly, even when the law exists it is inadequately enforced and there are gnawing gaps in its implementation.

The authors highlight that many of the inefficiencies in water management in India are attributable to the coordination failure amongst the governing institutions. The policymaking, implementation and monitoring of water policy is shared between five ministries and multiple agencies at central and state level which makes coordination of actions and implementation a herculean task. They argue that the lack of reforms in water policy have political underpinnings. In a democracy like India, politicians are often office seeking and value status-quo over tough measure which are likely to be unpopular in short-term but beneficial in long term.

The last section begins by discussing the highly debated topic of privatisation of water in India. The authors cite the pressures driving the governments to privatise water and discuss various privatisation models like BOT, BOOT and BOO. However, they remain sceptical of privatising water because it is likely that it may lead to marginalisation of poor sections of societies and deprive them of their basic right to water. This is followed by a chapter which chronicles the details and ramifications of interstate water disputes in India. The fundamental reason for such conflicts is that ‘water as hydrological unit transcends state boundaries, and supply sharing of river basins becomes embroiled in conflicting political and economic interests.’ (p.217)

One of the aims of the book is to establish the link between water security and national security, which the authors attempt to do in the chapter “Water Security in India’s Neighbourhood: Reconciling human development and national security”. It views the water conflicts between India and its neighbours as a potential security threat, especially the ones with Pakistan, and China – the only country with which India shares a trans-boundary river (Brahamaputra) without a formal water sharing agreement. The most notable idea proposed by the authors in this chapter is that of ‘shared resource security community’ for water, which is in many ways analogous to a conventional security community like NATO. Given the magnitude of water insecurity in South Asia the authors think that setting up a resource security community is optimal but highly unlikely given the geopolitics of the region, troubled histories of bilateral relations, and prevalence of competition over cooperation.

The book concludes with the chapter “Water Security: Hope and Despair” which estimates the future demand for water in India, briefly discusses some success stories and comments on the roles corporate social responsibility and civil society can play in improving water security.

This book is an excellent information resource for understanding the nuances of India’s water security challenge. However, it lacks a unifying narrative which sews in various parts of the book. Most of the chapters are information heavy and on many occasions where the authors criticise existing policies, practices and institutions, they fail to suggest viable solutions or frameworks to address these issues. Nonetheless, for anybody interested in water security, its intricate links with other forms of security (like food), and the threats water stress poses to the South Asian region in general and India in particular, this book is a must read!

Sudhanshu Sharma is pursuing an MPA in Public and Economic Policy at LSE. He is a Research Assistant at Department of Sociology, LSE and Capstone Consultant to the Department for International Development (DFID). His areas of interests are political economy and economic development. Prior to LSE, Sudhanshu worked as a Financial Analyst for Ernst & Young LLP

Posted In: Asia | Contributions from LSE Staff and Students | Development | Health and Wellbeing