Germany, Russia, and the rise of Geo-Economics by Stephen F. Szabo comes at the precise moment when the issue of Germany and Russia has become one of the hottest political topics in every living room between Berlin and Moscow – and perhaps in London and D.C. too. Tessa Szyszkowitz finds this timely study an important read for those who want to understand the background of the crisis in the Ukraine, which has thrown Russia and the West back into a new Cold War.

Stephen F. Szabo calls himself “a Germany watcher”. This is quite an understatement made by one of the most prolific Germany experts in the US. As professor for European Studies at Johns Hopkins University, and recently, as executive director of the Transatlantic Academy in Washington, Szabo has studied Germany’s development closely for decades. This volume, with its 187 pages, is slim. However, every words drips with detail how unified Germany has reemerged as a powerful player on the European stage.

The book is packed with valuable information on the relations that have been developed between Germany and Russia, starting with the historical strong link between the two countries. Szabo emphasises the role of German business in the shaping of foreign policy. He also describes how Germany’s Russia policy is perceived in the US and other European countries. Szabo does not shy away from addressing the dark side of the huge export success of unified Germany: “Entry into the Russian market has caused great opportunities for both profit and corruption”.

Szabo focuses particularly on the case of one electrical and engineering giant: Siemens. Szabo writes, Siemans “was welcomed to Russia by both Medvedev and Putin as Peter the Great had welcomed artisans and manufacturers from Germany to modernise Russia”. But since the times of the tsars the rules for engagement have changed. The company took the lead in modernising Russia’s train network, getting a contract for almost two billion Euros. But it did not get this contract for free, as it turned out after a proper investigation was undertaken. “Siemens was sanctioned by the World Bank in 2009 for corrupt practices of its subsidiary, Siemens Russia, for paying three million dollars in bribes for its transportation project in 2005 and 2006”. Szabo concludes: “These and other cases have raised questions about this seamy side of the German export success story”.

Szabo’s second most compelling description is of the German daughter of the Russian energy giant Gazprom: Gazprom Germania. Gazprom possesses the world’s largest natural gas reserves. When the Kremlin set up Gazprom Germania employees were hired carefully. “It employs a number of former East Germans reputed or suspected of being Stasi agents who had worked with Vladimir Putin when he was a KGB agent in East Germany in the 1980s”, says Szabo. 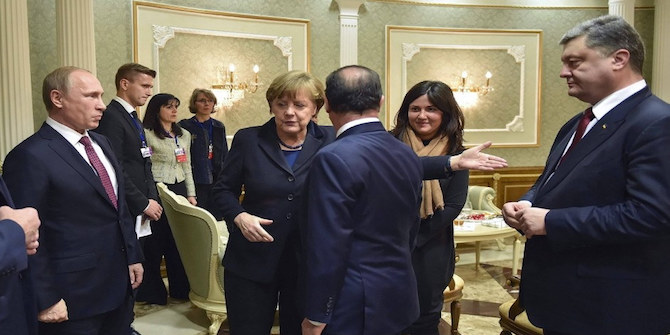 Gazprom Germania’s management reads like a contact list of former Stasi officers. Hans-Uve Kreher, Gazprom Germania’s director for personnel and organizational matters, was an informal employee of the Stasi – he does not deny this. Neither does the company.

Another link between secret services and business is Mattias Warnig, is managing director of Nord Stream. This pipeline was built to connect Russia’s gas reserves managed via Gazprom with Germany’s and other Western European households – circumventing the Ukraine. Warnig, according to newspaper reports, is a former captain of the foreign intelligence directorate of the Stasi and allegedly cooperated with Putin in the 1980s in recruiting West German citizens for the KGB.

In this murky world of former secret service agents one man stands out: Gerhard Schröder. The former Prime Minister has no Stasi connection, but became a personal friend of Putin while in office. Schröder later accepted a lucrative position as chairman of the supervisory committee of the North European Gas Pipeline Company, which oversees the building of Nord Stream Pipeline. The majority shareholder is Gazprom. Schröder calls Putin till today “a flawless democrat”.

As if to prove this point Szabo quotes Marieluise Beck, a German Green parliamentarian, who is convinced that Gazprom Germania’s executives “act as lobbyists for the Kremlin, leaning on their governments to put their national interests above a unified European energy strategy”.

In this context it does not seem too astonishing that Angela Merkel’s government recently announced the so-called “Energiewende”, an exit from nuclear and fossil-fuel energy. The German chancellor wants to redirect her country towards renewable energy – and away from Gazprom’s aging gas fields. This, concludes Szabo, will “decrease German dependence on Russian energy in the long run”. Finally, he points out that the geopolitical setting is another determining factor. Szabo briefly touches on “the shift of the United States away from European security missions”, which will force Germany to think about its strategic options: “Germany will not be able to outsource security policies as it did for most of the last six decades”. His most crucial conclusion is one that has not been clearly stated until now: “The twentieth century could have been the German rather than the American century if Germany had had the leadership and the mature democratic system it now possesses. It has learned from its horrible Nazi past and is poised to be the kind of power that is suited to the twenty-first century”.

This very informative book suffers only from one thing: History has now outrun Szabo’s conclusions. Where he sets out four possible scenarios for German Russian relations in 2030, we have already seen dramatic changes in political and economic relations between Berlin and Moscow in the past months: after the downing of a Malaysian passenger airplane over Eastern Ukraine in July, with Russian-backed rebels widely seen as responsible, the German Chancellor and her Foreign Minister Frank-Walter Steinmeier have pushed for painful economic sanctions against Russia. These sanctions do not only hurt Russia, but Germany too. The fact that the German government was ready to take a hit for its own economy in order to maintain European values has, for the first time since the Second World War, means Germany is now firmly on the map as an important foreign policy player on the international stage.

Professor Szabo’s book went to print before these events. But Germany, Russia, and the Rise of Geo-Economics sets the stage for recent developments in the most informative way. Maybe Angela Merkel read a draft before she made her move to confront Vladimir Putin with far reaching sanctions?

Tessa Szyszkowitz holds a PhD in History from the University of Vienna, Austria. The author and journalist worked as a Middle East, Russia and EU correspondent before moving to London, where she has been living since 2010. Her book “The New Russians” described the new emerging middle class in Russia (in German). She blogs in English and German at www.tessaszy.com.