The book presents an original and engaging argument for the necessity for further analysis into choices democracies make prior to engaging in conflict, and the impact of the media and the public on decision makers, writes Gemma Bird.

War and Democratic Constraint: How the Public Influences Foreign Policy engages with the questions of military interventions, the role of the public in determining and effecting foreign policy, and the effect of information access on determining this role. This is a niche that is not only key to understanding International Relations from a scholarly perspective but that has also seen a recent upsurge in public discourse.

At a time when films such as We Are Many are questioning the democratic accountability of governments that ignore the protestations of millions of their citizens when engaging in war, this project offers a useful and accessible intervention into the debate, asking what it is that enables citizens in different states to engage more or less and to a greater or lesser effect.

War and Democratic Constraint is a collaborative project between Matthew Baum of the Harvard Kennedy School and Philip Potter of the University of Virginia. It is not the first collaboration between these two scholars. Their previous works consider the role of the media and public opinion in defining foreign policy. The Relationships Between Mass Media, Public Opinion, and Foreign Policy: Toward a Theoretical Synthesis (2008) provides the ground work for the most recent book, which outlines a notable gap in the literature in which scholars have failed to reach a consensus regarding public opinion on foreign policy. They use the article to “clarify the multifaceted relationships” between citizens, the mass media and foreign policy outcomes and to start to investigate the role these actors play. Their new book takes this investigation further, blending quantitative (Chapters 3-6) and qualitative analysis (Chapter 7) in an attempt to present a detailed analysis of the role of citizens in influencing foreign policy and what factors dictate that role.

The book presents an original and engaging argument for the necessity for further analysis into choices democracies make prior to engaging in conflict, and the impact of the media and the public on decision makers. It questions the assumptions made by democratic peace scholars: that democracies rarely engage in war especially with other democracies. The authors suggest that such a hypothesis ignores the fact that “not all democracies are alike when it comes to insulation and responsiveness”, and there is more to understanding states than the realist discussions of differences between autocracies and democracies. They argue that focusing on the distinction between autocracy and democracy ignores real diversities within democracies. For example, why was the UK willing to enter into a coalition with the US in 2003 when other democratic states were not? In making this argument they intend to take the research beyond the binary categories to offer a more nuanced account of how citizens hold their governments to account in different political systems and the effect this has on foreign policy.

They claim in the first chapter that “the crux of this book is that information is the key to accountability and constraint in democracies”. This is fundamental to understanding the narrative in the remainder of the work that questions the institutions and agents that enable public access to information and thus dictate the role the public is able to play in decisions about war and foreign policy. Their usage of a mixed methods approach successfully balances the need for generalizable results with an attempt to provide a more detailed account of causation. Whilst the research presented in the empirical chapters is complex, the inclusion of regression tables in the appendix provides readers with an opportunity to delve beyond the presented results and to look in more detail at the methodologies themselves. The quantitative chapters provide a convincing argument for a generalizable relationship between informed citizens, for example through media access, and “conflict behaviours, ranging from initiation, to reciprocation, to coalition formation”. However, the authors also recognise the limits of quantitative approaches. As a result they are able to successfully balance their quantitative findings with a detailed qualitative account in Chapter 7 that compares the decisions of Spain, Poland, the UK and Germany to either enter in to, or avoid, a coalition with the US against Iraq in 2003.

Whilst War and Democratic Constraint is clearly a research piece intended to enhance knowledge in this area of International Relations, its accessible tone and well-presented approach to stepping beyond the realist framework makes it suitable for a mixed audience, including postgraduate students with an interest in this field. There is an assumption in this text that the readers have at least a cursory knowledge of surrounding literatures and a decent grasp of quantitative techniques. However, the clear summary of the literature to which they are speaking in the opening chapters, as well as the inclusion of brief chapter conclusions following the empirical analysis, ensures that the book has utility for a broader audience than simply other experts, which is not always achieved by authors carrying out complex quantitative analysis.

By challenging “the tenuous nature of democratic constraint”, the book is able to highlight the role of information, and thus information sources, in dictating the public role in foreign policy. Whilst Percy Shelley was correct in his assertion that “We are many, they are few”, this book effectively demonstrates that without information the many will always struggle to effectively hold the few to account.

Gemma Bird has recently completed a PhD in political theory at the University of Sheffield. Her work focuses on the foundations of cross-cultural dialogues and her specialist areas of interest are African Political Theory and Kantian philosophy. Recently she has also started to look at questions of citizenship and alternative approaches to political engagement. 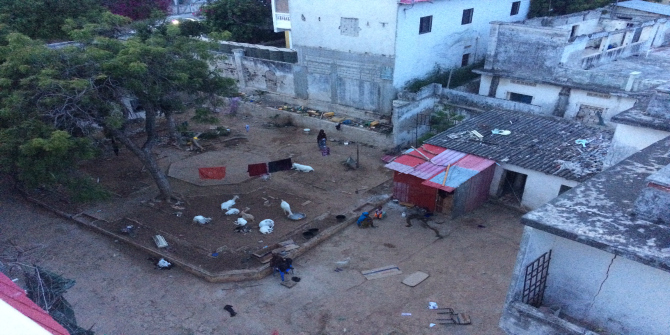