Kathleen Chiappetta welcomes Fishers and Plunderers: Theft, Slavery and Violence at Sea as a valuable introductory overview of the supply chain behind the 90 million tonnes of fish that are pursued and landed each year as part of the globalised fishing industry. Alastair Couper, Hance D. Smith and Bruno Ciceri draw upon their wealth of experience to address issues of over-fishing and sustainability as well as the often harrowing working conditions of fishers. 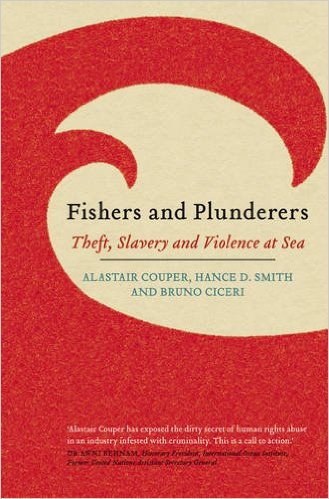 This quote, written close to 200 years ago, is the opening line to Fishers and Plunderers: Theft, Slavery and Violence at Sea. It sets the premise and tone for Alastair Couper, Hance D. Smith and Bruno Ciceri’s exploration of our globalised fishing industry.

Both Couper and Smith are accomplished researchers, having written an extensive number of papers and books on maritime activities ranging from international shipping to the development of communities. Moreover, Ciceri brings to the book approximately 30 years of experience working with migrants and seafarers around the world. Through this diversity in maritime expertise, the authors together weave the telling story of how global demand and corporate pressures are exploiting fish resources and those whose livelihoods depend on this industry.

The major strength of this book lies in how readers can delve into the story without a prior knowledge of the fishing industry. Each chapter lightly builds on the previous one, yet can still be read as an independent piece informing readers on different stages from recruiting fishers to distributing fish. Readers will come to appreciate the complexity of this supply chain and the difficulty that exists in securing and enforcing the rights of fishers.

The book is divided into two sections with the first focusing on the nuts and bolts of the industry: fish supplies, national and international regulations and vessels and gears (catching apparatuses). In this section, the authors argue that the race to fish creates an unsustainable industry with detrimental consequences for fish stocks, maritime communities and the lives of fishers. With resources increasingly scarce, it is becoming more expensive to fish. To cut expenses, fewer fishers are employed, longer hours are the norm and older vessels are navigated further away from the coast. Coastal states have exclusive economic control of up to 200 nautical miles from their coasts, or up to the boundaries of adjacent countries. This system was supposed to allocate quotas first to a coastal state’s fishers, then to foreign states. However, in practice, developing coastal countries ‘sell’ these fishing rights to developed countries, thereby diminishing the economic viability of small-scale fishers and their communities. Furthermore, there are a number of examples of over-fishing, damaging the environment and finding ways to maximise profits through laundering and marketing stolen catches.

This race to the bottom (in terms of labour costs) makes an already risky profession even more dangerous with cases of illegal, unreported and unregulated (IUU) fishing practices abounding. For certain west African countries, IUU fishing represents up to 40 per cent of catches in their exclusive economic zones (EEZ). This competitive environment forces some fishers, often unknowingly, into precarious situations including slavery, piracy and drug trafficking. 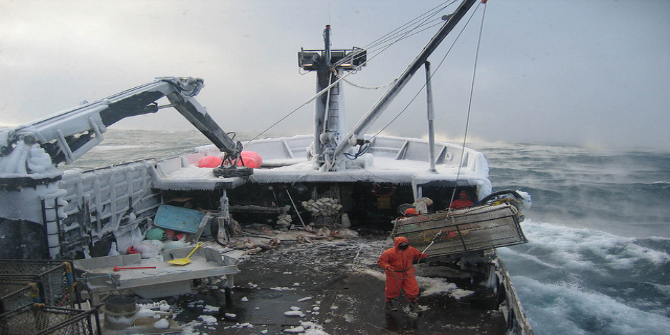 The second section focuses on how fishers are recruited and how they are treated once they are working in the industry. The authors provide an account of a number of ways in which agreements are created, altered and enforced to reduce labour costs of migrant fishers. These contracts are often dubious, with migrants (and sometimes their communities) having to pay recruitment agents for travel costs and documents with the promise that these expenses will be subtracted from a fisher’s earnings, that is, if the fisher actually receives payment at the end of the day. The authors also discuss regional hubs for recruiting and trafficking fishers, including migrant Ukrainians fishing on Russian, Turkish or Japanese vessels and South-East Asians being trafficked into Thailand, a topical issue today. While at sea, migrant fishers are at the mercy of the elements and the captain. The authors give a number of chilling examples detailing heinous abuse and slavery. Cases exist where children are used as labour and migrant fishers endure daily beatings, are denied medical attention and murdered. If they do escape, they usually do not have passports to prove their identities and are sometimes arrested and jailed. Some fishers do successfully strike, yet others turn to mutiny and murder to get out of their precarious situations. What becomes apparent in reading this book is that there are varying degrees of abuse and that increasingly outside help is needed. New Zealand, for instance, amended its law to state that even foreign-owned vessels fishing in New Zealand’s EEZ, as of 2016, ‘must operate under full New Zealand legal jurisdiction’ (213), which includes enforcing labour standards. Moreover, there are a number of charities and welfare organisations that are helping fishers understand their rights and reclaim lost wages.

This book offers a variety of examples that shows the extent of the abuse and deplorable conditions that migrant fishers face around the world. Its richness lies in evoking raw emotions through the reality that, in some cases, fishers pull straws to see who will next be executed or are used as pawns for political boundary assertions in the Spratly Islands, a highly contested area marked as dangerous on navigation charts. There are so many examples of abuse that it leaves one to wonder whether there are many cases where fishers are treated humanely. The authors do give a few examples in this regard, such as how New Zealand is addressing and stopping abuse in its waters.

The authors are quite succinct when highlighting the different dimensions of their argument, but in doing so they do not delve too deep into any one particular issue. It is for this reason that this is an excellent introductory text to the global fishing supply chain. For those knowledgeable about this industry, this book is well organised in that it contextualises issues whilst always contributing to the bigger picture.

As stated in the second sentence of the first chapter, this book sets out ‘to raise concerns about the deaths, dangers and deplorable conditions experienced by fishers who earn a living from the sea, and also above that the communities that depend on them’ (1). Couper, Smith and Ciceri achieve this end by providing a wealth of examples that become the lens through which readers can peer into how 90 million tonnes of fish are pursued and landed each year in this globalised industry.

Kathleen Chiappetta has a Bachelor of Journalism Degree from Ryerson University in Toronto and a Master of Science Degree in Global Politics from the LSE. Over the years she has written and produced pieces on national and international issues such as agricultural and maritime trade, engineering education and Irish migration. She has worked for the International Federation of Red Cross and Red Crescent Societies (IFRC) in Geneva, the United Nations Educational Scientific and Cultural Organization (UNESCO) in Paris and the High Commission of Canada in the United Kingdom.