In The Cinema of Agnès Varda: Resistance and Eclecticism, Delphine Bénézet explores the filmmaker’s career through a particular focus on her lesser studied films. Sander Hölsgens praises the book for drawing attention to the diversity and variety of Varda’s oeuvre as well as to the crucial role played by the corporeal across her filmic works. 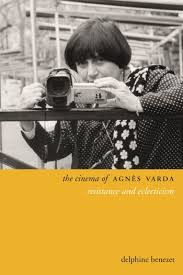 In The Cinema of Agnès Varda: Resistance and Eclecticism, Delphine Bénézet sets out to explore Varda’s career as a whole, with an emphasis on her neglected and little-known films. It is here that Bénézet notices and readdresses a gap in scholarship on Varda by taking into account the diversity and variety in her filmic works. Moreover, The Cinema of Agnès Varda is an attempt to understand Varda’s contribution to cinema over the last five decades, positioning her films in relation to the notion of haptic cinema, as notably formulated by Laura Marks. That is to say, ‘Varda creates a cinema of the senses that takes the audience on an intellectual and sensory journey of discovery’ (6).

The Cinema of Agnès Varda, in turn, invites the reader on a journey to discover Varda as a filmmaker, from her collaborations with Chris Marker and Alain Resnais to her ethics of filming and her approach to physical space. In the first chapter, ‘Agnès Varda: A Woman Within History’, Bénézet not only positions Varda as a feminist filmmaker, but also argues that she places filmic emphasis on the corporeal and the bodily. One of the chapter’s main arguments is that Varda’s feminist stance and her continuous exploration of the body are interrelated and give us a significant insight into the poetics and formal structure of her films.

In L’Opéra Mouffe (1958), Varda explores the experience of being pregnant in an experimental and arguably essayistic manner. This black and white film consists of ten vignettes, some of which could be analysed as ‘little sensory haikus’, whilst most of them are introduced by intertitles as though they were silent films. Yet L’Opéra Mouffe is strikingly ‘modern’ in using a musical soundtrack. For Bénézet, part of the film’s significance is the diverse ways in which it orchestrates and threatens bodies on the screen. For example, there is a rethinking of the naked body, or nudity more broadly, within cinema: ‘The juxtaposition of the nude close-ups and the violent removal of the pumpkin’s seeds makes the pregnant woman’s fears manifest and palpable’ (12). Another vignette juxtaposes still lives – or nature mortes, in Bénézet’s words – with a pregnant woman consuming flowers.

Here, Bénézet makes the argument that Varda rejects a ‘fixed version of female subjectivity’, precisely by reconsidering and showing ‘the difficulties that come with some of the changes that the mother-to-be undergoes when pregnant’ (16). In so doing, Varda rejects a normative and mythical version of motherhood via this filmic rethinking of the body and the corporeal. Further on in the chapter, Bénézet also emphasises L’Opéra Mouffe’s layeredness and depth, for not only is the film concerned with the notion of pregnancy, but also consists of scenes that could be regarded as ethnographic. Parts of L’Opéra Mouffe examine the everyday, including public life, in the context of Paris in the late 1950s. In other words, in this film ‘one cannot literally dissociate the private, the public and the historical as they are clearly intertwined’ (20). 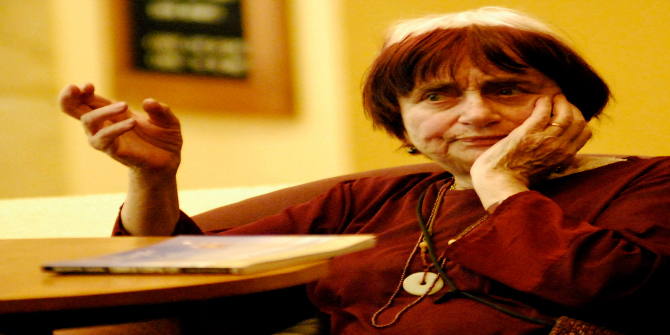 This attention to the diversity within films like L’Opéra Mouffe, yet also within Varda’s oeuvre per se, is the key strength of The Cinema of Agnès Varda. Emblematic of this is the fourth chapter, which demonstrates Varda’s diverse ways of thinking about, approaching and documenting places and space. Interestingly, the chapter’s title – ‘Poetics of Space’ – underlines the particular kind of spatial representation found within Varda’s films, and is also a nice reference to Gaston Bachelard’s eponymous work. For, as Bénézet argues, Varda attended a number of Bachelard’s lectures and both share certain thoughts on spatiality: ‘Like her professor, Varda believes that lived or inhabited space is known phenomenologically through participation in or inhabitation of the world’ (90).

In this fourth chapter, Bénézet explores how these thoughts are rendered within or via Varda’s films, and, once more, there is an emphasis on sensory experience, tactility and the body. In Plaisirs d’Amour en Iran (1976), for example, the landscape has a life of its own and is affected by the intimate dialogues of the two main characters. Within Varda’s work, space transcends geometrical space. For a house – or, in the case of Plaisirs d’Amour en Iran, a landscape – that has been experienced is first and foremost an inhabited and lived space. In a similar vein, the notion of space within exhibitions holds an important position for Varda. However, although well-described, it is a shame that there is only one (black and white) photograph of an installation – which isn’t Varda’s.

For Varda, the installation is an opportunity to think through and reconstruct memories and experiences. There is an interest in the tonality of the installation as architectural space, in how an exhibition feels and what its relations are with both our idea of the home and the notion of the outside world. What is more, installations as constructed by other artists take up the role of being a significant point of reference for some of Varda’s films. In Ydessa, les ours et etc (2004), for example, Varda reconstructs her impressions of Partners (The Teddy Bear Project), a large-scale exhibition by German-Canadian artist Ydessa Hendeles. Like the exhibition, the film is concerned with experiences and memories of World War II, via a careful and, possibly, Bachelardian reconsideration of space. Whereas Hendeles’s exhibition emphasises a form of physical proximity to how the war affects her, Varda’s film explores how ‘her life became inextricably entangled with the legacy of the war and the memory of those who died’ (125).

Precisely by highlighting those films that are often neglected or overlooked, The Cinema of Agnès Varda: Resistance and Eclecticism offers a relevant and insightful review of Varda’s career thus far. The book successfully seeks a balance between formal interpretations and contextual analyses, and its interdisciplinary character allows Bénézet to recognise and value the diversity and complexity of Agnès Varda’s films.

Sander Hölsgens is a filmmaker, and a PhD candidate at the Bartlett School of Architecture, UCL. He is also a contributing editor of Cultural Anthropology (Cultanth.org). His most recent research is an anthropological inquiry into the sensory experience of public space in Seoul, South Korea. Find him on Twitter @sanderholsgens.