In Governmentality and Counter-Hegemony in Bangladesh, S.M. Shamsul Alam seeks to conjoin Michel Foucault’s theorisations of governmentality with Antonio Gramsci’s notion of counter-hegemony in order to account for changes in forms of governance in the case of Bangladesh. Although the book’s structure is occasionally repetitive and disjointed, Alex Johnson argues that Alam offers a valuable reappraisal of the concept of governmentality that will be of use to students and academics working in the field of political theory. 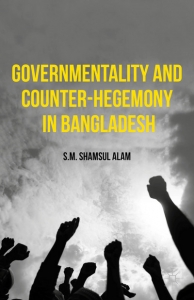 Theoretical eclecticism is rare in most mainstream academic circles. S.M. Shamsul Alam takes on this task by providing an interesting and much-needed synthesis of Michel Foucault’s idea of governmentality and Antonio Gramsci’s notion of counter-hegemony.  Throughout Governmentality and Counter-Hegemony in Bangladesh, Alam argues that counter-hegemonic movements can challenge and thus reformulate dominant forms of power. Alam applies this theoretical framework to Bangladesh, linking instances of resistance in the colonial and post-colonial periods to changes in forms of governance. From the Pakistani administration to Hussain Muhammad Ershad’s authoritarian government and liberal democracy, Alam’s work underscores the importance of understanding how changes in forms of governance arise.

In setting out his theoretical discussion, Alam draws from Foucault’s Collège de France lectures, describing governmentality as ‘the strategies a government ‘‘deploys’’ to control the ‘‘population’’ in an effort to achieve desirable outcomes and consequences’ (1). Governmentality is thus not a singular operation, but one that is deployed in multiple ways through various facets of government. However, Alam seeks to address the weaknesses in Foucault’s theorisation of governmentality, which he identifies as the inability to explain changes in modes of governance.  He therefore draws on Gramsci’s constructs of hegemony and counter-hegemony to provide the necessary link in explaining these changes in governmentality. Alam’s theoretical synthesis thus addresses the flaws in Foucault’s theorisation, while also applying the concept of governmentality in an innovative way. In developing his argument, Alam illustrates different categories of governmentality and their relationship to grassroots resistance movements throughout the book.

In his examination of the colonial period of Bangladesh, in which the state was under Pakistani control, Alam focuses on the role of Urdu language in the maintenance of Pakistan’s administration of Bangladesh. Springing from partition ideology and the ‘two nation’ theory, the Pakistani ruling elite linked the formation of Pakistan with an Islamic religious identity. The Pakistani elite attempted to impose Urdu as the lingua franca in both West and East Pakistan. Urdu in West Pakistan had a historic link to Muslim religious authorities and became tied to the formation of Pakistan’s religious state identity.

Alam argues that Bengali resistance to Urdu during the Language Movement must be understood as a counter-hegemonic movement. The Language Movement sought to establish Bangla as the national language in East Pakistan through various attempts at government policy reform. The author’s analysis of the Language Movement connects well to Gramscian conceptions of language, which emphasise the relationship between power and language. As was the case with Urdu, language is connected to the dominant class’s propagation of power and certain cultural expressions (22). In this way, the opposition movement to Urdu language in Bangladesh was more than just opposition to national language policies, but was also a direct challenge to Pakistani political authority. Alam argues that by rejecting Pakistani authority, the Language Movement in Bangladesh created space for the emergence of new political possibilities as new identities arose from having a national Bangla language. This supports Alam’s main argument by demonstrating how the Language Movement was integral to altering Pakistani colonial governmentality. 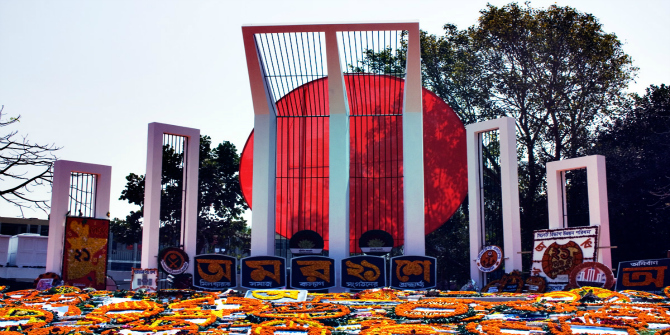 Image Credit: Shaheed Minar in Dhaka, Bangladesh. The monument in Dhaka established to commemorate those killed during the Language Movement demonstrations of 1952 (Mostaque Ahammed)

In a second period, Alam examines the post-colonial context of Bangladesh, focusing on the use of religion in the creation of an Islamic governmentality (99).  After providing a historical analysis of Islam in Bangladesh, the author argues that Islamic governmentality used fatwa as a form of biopolitical control over women. Here Alam shows how religious laws attempted to regulate female bodies and sexuality. In response to this form of Islamic governmentality, Alam posits that women’s testimonials, in the form of poems and autobiographies, challenged the biopoliticisation of female sexuality. The author argues that writings about female sexuality in these works constitute a subversive act (123). While the author provides a clear analysis of the links between fatwa and biopolitics, Alam stops short of identifying how women’s testimonials led to a shift in Islamic governmentality.  This problematises his argument, as it is unclear whether women’s writings actually played an active role in transforming the position of women in society. This brings into question a larger theoretical hole in Alam’s work as the author never addresses why these particular counter-hegemonic movements have been successful over others at altering governmentality.

At the end of this book, Alam asserts that a new global form of governmentality has arisen in the form of neoliberalism. This goes a step further than his previous analysis of the changing forms of governmentality in the context of Bangladesh by offering a unique perspective on governmentality beyond the state. It remains unclear as to why Alam makes the leap to a globalised form of governmentality, but it is his most notable contribution in the work.  In this chapter he examines how poverty eradication programmes orchestrated through NGOs and international organisations offer new ways to monitor and control poor populations in Bangladesh. This adds another dimension to his application of governmentality as Alam provides a valuable analysis of how relationships of power also exist beyond the state level and operate increasingly on an international scale.

Overall, Governmentality and Counter-Hegemony in Bangladesh provides an engaging, theoretical read of Bangladesh. At times the work becomes repetitive and disjointed as Alam charts different forms of governmentality and instances of resistance through every chapter, often without providing clear links as to how the chapters interrelate. A more in-depth examination of Bangladesh’s history would help the reader make these connections as well as create a stronger correlation between instances of resistance and resultant changes in governmentality. Despite this weakness, the author makes a strong argument for the re-examination of existing theorisations of governmentality and provides a unique and intellectually rich theoretical rendition of the concept. Alam’s strengths shine through in the application of Foucauldian and Gramscian theory, which remains easily accessible throughout the work. Students and academics interested in political theory would greatly benefit from his analysis.

Alex Johnson holds a Bachelor’s degree from DePaul University in International Studies and Spanish with a concentration in religion and political conflict in South Asia.  He recently completed a Master’s degree in International Relations at the London School of Economics.  His interests include religions in South Asia and post-structural and post-colonial theory.  Currently, Alex works in Washington, D.C. as an Academic Assistant in support of a research centre at the National Defense University.