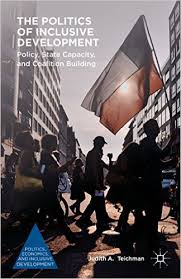 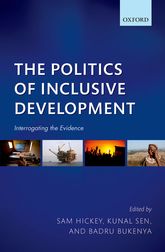 These two books are ideal to read in conjunction because they explore the same question of the politics of inclusive development through different approaches. Judith A. Teichman’s comparative, historical analysis of Mexico, Indonesia, Chile and South Korea is brilliantly complemented by Sam Hickey et al’s edited collection, which comprises thematic chapters on the politics of accumulation, governing natural resources, service delivery, social protection, the rule of law, gender, ethnicity, the politics of aid as well as China in Africa.

State capacity is portrayed as fundamental to the politics of recognition, redistribution and accumulation. An effective taxation regime and proactive industrial policy, generating more and better jobs (not just funding vast numbers of microenterprises and papering over poverty with conditional cash transfers), are cardinal for Teichman. Kunal Sen likewise underscores the importance of state provision of public goods. In some cases, such as Ghana and Rwanda, these have been facilitated by top-down accountability (see Claire McLoughlin’s chapter on service delivery).

Importantly, however, state capacity is seldom fostered by non-conflictual, technical tinkerings. To focus on the policy instruments enabling fiscal spending stabilisation in Chile, for example, is to miss the point. Technocratic management of resource rents was not enabled simply by using income from copper exports for countercyclical policy, but rather by the political context from which the policy emerged and endures. It only works because the bureaucracy is competent, publicly motivated and insulated from political interference and raiding, as Armando Barrientos and Sony Pellissery detail. 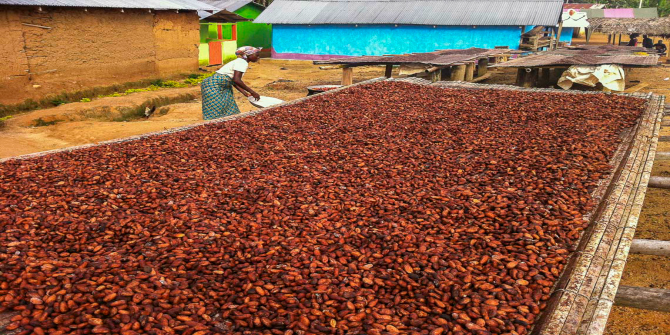 Short answer, from both texts: coalition-building.

Chile’s ‘Penguin Revolution’ (so called because of their uniforms) was led by middle-class students. As Teichman documents, middle-class groups have also been instrumental to democratisation and redistribution in South Korea: allying with human rights groups and unions, publicly contesting inequalities and being an empathetic bureaucracy concerned about social welfare. She further speculates that middle-class groups would be more likely to support redistributive policies if their own positions were less precarious. [I’m not sure there’s enough evidence to support that point, however – US health insurance being an obvious counter-example (see Paul Starr as well as Lawrence Jacobs and Theda Skocpol).]

All fascinating, but I found three surprising omissions.

First, the books predominantly focus on governing elites and their reasons for acting. Why so little attention to the other end of the social contract – how marginalised people gain self-esteem; disavow demeaning stereotypes; and foster wider support for equality, including building coalitions with sympathisers among advantaged groups and political elites? There’s no shortage of literature on this (as David Hudson and I have found in writing our paper on ideas).

Second, I was surprised that two mighty texts on politics do not differentiate between different kinds of ideas: internalised ideologies and norm perceptions. That is to contrast individuals’ unquestioned acceptance of the status quo and their beliefs about what others think and do. For instance, even if people do believe they are entitled to better health services, they might not challenge inequalities if they lack confidence in the possibility of social change, if they believe the state will only ignore them or react violently.  Likewise, if women believe the police will be unsympathetic, they may be reluctant to report local corruption or gender-based violence.

To help us identify the key variables to explore and explain, Hickey et al offer the following visual representation on page 29 of the ‘Introduction’ to The Politics of Inclusive Development: Interrogating the Evidence: 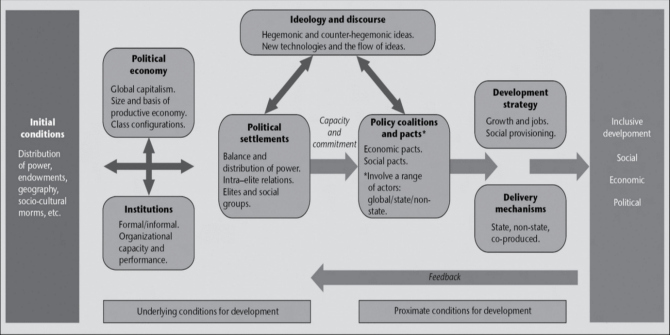 Another questionable component of Hickey et al’s book – at least in my mind – is that each chapter ends by underscoring the ‘need’ for further research. Even if there are gaps in the literature on general trends, I’m not sure it matters. When trying to support pro-poor reform in specific locales, what good are general theories about how elites come to adopt long-term visions for Development? This relates to a much wider problem in academia. Rather than research then disseminate big ideas, might an iterative, collaborative process between researchers and Development practitioners be more effective? – as eloquently suggested in Deval Desai and Michael Woolcock’s chapter (see below), and further detailed by Matt Andrews, in relation to judicial sector change in Mozambique:

‘[M]ore research’ as conventionally understood will only yield marginal improvements in conceptual clarity and add only incrementally to our cumulative knowledge – the political salience, legitimacy, and action-ability of such concepts must be negotiated anew in each setting, between different epistemic groups (professions) and across divides of gender, ideology, and class. Such negotiation and deliberation is inherently a contested, dynamic process, likely to yield an idiosyncratic outcome that is a unique hybrid of local and external inputs mediated through political spaces of varying capability, legitimacy and robustness […]

[W]e need to invest more substantial (and substantive) resource in the monitoring and real-time evaluation of ROL [rule of law] interventions; there needs to be constant reassessment, clear articulation of goals, with space for practical innovation, combined with modesty about timelines, trajectories, and a realistic appreciation of the value of pragmatism. Third, greater effort needs to be extended to invigorating communication programmes or programmes supporting construction of spaces for public engagement and discursive participation. This means not just indicating goals or imparting knowledge, but allowing groups (especially women, the poor, and marginalized groups) to participate, contest meaning, understand benefits, and form coalitions; it means recognizing that ROL reform is inherently a site of contestation, for which enhancing access to it is not just a matter of the removal of factors that stop an individual from bringing a case (e.g. geography, cost), but removal of obstructions to effective and sustained participation (communication, education, awareness). As a result, it requires development practitioners and agencies to develop a highly reflexive sensibility – and allied set of epistemological and methodological tools – on the ways in which they construct the spaces for and themselves participate in these contests (Desai and Woolcock).

Dr Alice Evans is a Lecturer in Human Geography at the University of Cambridge. You can follow her on Twitter @_alice_evans. Read more reviews by Alice Evans. 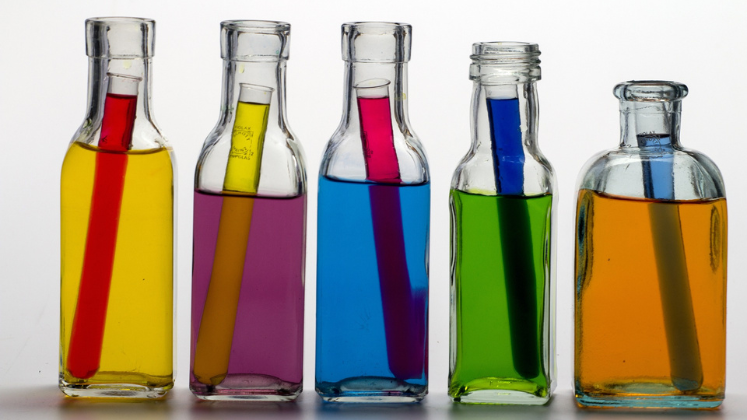