How might we tackle institutionalised gender inequalities? In What Works: Gender Equality by Design, Iris Bohnet advocates systemic interventions focused on de-biasing environments rather than individuals. Employing a behavioural design approach, the book serves both as a clear indication of where we currently stand and a guide as to how, institution by institution, we can nudge ourselves towards greater gender equality, writes Nic Logan-Murray.

If you are interested in this review, you may also like to listen to a recording of Professor Iris Bohnet’s LSE lecture, ‘What Works: Gender Equality By Design’, recorded 14 April 2016. 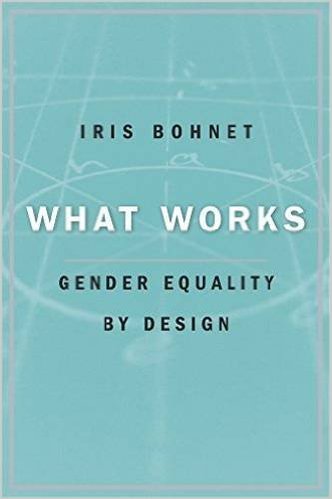 In a growing field of books with diverse theoretical and ideological proposals for tackling institutional gender inequality – from the corporate self-help strategies of leaning in to the systemic defiance of leaning out – Iris Bohnet’s What Works: Gender Equality By Design deftly carves out a place for itself based on a vast and comprehensive review of research across the social sciences. Focusing on inequalities primarily within workplaces and schools, Bohnet, a behavioural economist at Harvard University’s Kennedy School of Government, does not set herself in opposition to or in support of these other viewpoints. Instead, she emphasises the complementarity of a behaviourally-based and empirically-driven approach with broader feminist strategies.

In advocating systemic interventions to tackle gender inequality, Bohnet’s focus is on de-biasing environments rather than individuals. By identifying behaviours and processes that take root in institutions and explicating how they impede gender equality, it may be possible to intervene and design around the point at which bias is most likely to take hold. This behavioural design-based approach – often termed ‘nudging’ –  is growing in popularity among policymakers due to its cost-effectiveness and ease of implementation, and focuses on low-hanging fruit, such as improving recruitment processes, to begin to ‘move the needle’ more rapidly towards gender equality.

Daniel Kahneman, the Nobel Prize-winning behavioural economist, has suggested that were he to remove any process involved in decision-making, it would be overconfidence and the optimism individuals hold when executing plans. One would hope that, if not wholly eliminated, the confidence of those attempting to de-bias individuals would be sufficiently dented following Bohnet’s deft critique of the limitations of such endeavours, drawing on insights from Kahneman’s work and a mix of experimental and real-world evidence on cognitive biases. Despite the $7 billion spent annually by US corporations on diversity training, Bohnet argues that there is a dearth of evidence to indicate it actually works; it may even backfire due to the phenomenon of ‘moral licensing’: the tendency for individuals to act more immorally following the completion of an act or set of behaviours they see as being morally good. Instead, she advocates for a capacity-building approach she terms ‘unfreeze change freeze’, which involves not only encouraging individuals to confront their own biases, but also, more importantly, to consider how the organisation can mitigate them through adopting new processes.

Much of the book progresses in this manner, looking at national and industrial level statistics and examining why processes aren’t working, before delving deeper to assess plausible behavioural reasons for these and moving towards workable and readily implementable solutions for the reader. None more so than in the realm of recruitment, which – as one can imagine – is rife with bias, implicit discrimination and well-intended but misguided processes. Bohnet guides the reader through the numerous pitfalls present throughout the entire recruitment process. The messages sent to potential applicants matter, with implicitly gendered language influencing individuals’ perceptions of their belonging in the workplace, but not their suitability for the role. Without anonymising demographic details, minority applicants are significantly less likely to be called to interview. In interviews themselves, an unstructured procedure may be prone to confirmation bias, with interviewers only seeking new information to confirm rather than challenge existing beliefs about candidates. The reader is left with a methodical interview checklist in a section that would serve as a valuable guide for many organisations seeking to fairly recruit from the widest talent pool possible.

Such nudging and behavioural design methodologies may seem like one-trick affairs for tackling endemic gender inequality present in the daily lives of many institutions. But these are well complemented by chapters that continue to draw on underlying behavioural biases while adopting insights from social psychology and sociology around group formation and performance. When forming groups, Bohnet emphasises the importance of ‘critical mass’, alongside an awareness of the cues given to members around group formation, for avoiding perceptions of tokenism. Such self-perceptions may mean individuals work to assimilate amongst the majority, often silencing their own perspective; while further down the line, rather than paving the way for others, they may actively distance themselves from those below them, further hindering the push towards greater equality in workplaces. This process highlights how thorny a process it may be correcting an already heavily skewed workplace. Nonetheless, numerous suggestions are provided to ensure that, at the least, group processes work to promote greater equality of viewpoints and perspectives. One of the most promising of these is the imposition of ‘political correctness norms’ that clarify the group’s terms of engagement. Contrary to the popular expectation that such constraints are stultifying, they were found instead to allow for greater exchange of ideas and creativity, particularly for women for whom this reduced the risk of sharing more, often novel, suggestions.

The scope for utilisation of social norms is again drawn on as Bohnet extends her focus to the wider environment and political institutions, in a section which is ambitious in scope, but rather more speculative. Social norm messaging, which encourages individuals to attend to the behaviours of others and to run with the herd if theirs is out of line, has worked in encouraging individuals to reduce energy consumption and pay taxes on time. Bohnet suggests that adapting this method could work to address gender inequality. However, it is unclear whether it would prove capable of working when addressing behaviours that aren’t as readily salient and comparable or hold as significant personal costs for failing to converge on the norm. A stronger case, however, is made for the soft power of the growing number of gender equality rankings of institutions in prompting firms to move towards the prevalent norm due to their public availability and so greater accountability.

At times, the book is vulnerable to one of the main critiques levelled against behavioural economics as a discipline: namely, the tendency to ascribe unique cognitive biases to newly observed flaws in decision making. It has been argued that this conceptualisation ignores the possible similarities in underlying processes while producing an overly fragmented view of behaviour. Bohnet dedicates a chapter to these biases at the beginning of the book, to both highlight their pervasiveness and indicate there is no one silver bullet for overcoming unconscious bias. However, as these terms continue to crop up italicised across the book, the list verges on unwieldy by its end. Well-established phenomena such as ‘loss aversion’ and ‘confirmation bias’ find themselves sharing space on this list with far newer terms such as ‘algorithm aversion’. Given the replication crisis psychological research has found itself facing, this may leave readers questioning both the inclusion of, and the level of attention afforded to, these more unfamiliar terms.

What Works, then, reads less as a call to arms than as an invitation to both practitioners and general readers to question their own underlying biases towards, and the prevailing wisdom on how best to tackle, institutional gender inequality. Through Bohnet’s comprehensive unpacking of the global challenge that faces us, taking in results from studies across all continents, she provides a nuanced discussion of, if not always what works, then what we know about the effectiveness of existing interventions. Alongside this, the provision of a behavioural toolkit and numerous workable suggestions that can be implemented immediately mean What Works serves both as a clear indication of where we currently stand and a guide as to how, institution by institution, we can nudge ourselves towards greater gender equality.

Nic Logan-Murray holds an MSc in Behavioural Economics from the University of Stirling and currently works as a research officer for the Money and Mental Health Policy Institute.

Posted In: Economics | Gender and Sexuality