In Foucault with Marx, Jacques Bidet seeks to synthesise the theories of these two formidable thinkers. This is a highly accomplished book that will be of interest to seasoned political theorists; however, its verbosity and abstraction never quite allow it to articulate a clear political strategy through which to attend to the harms of capitalism today, finds Alexander Blanchard. 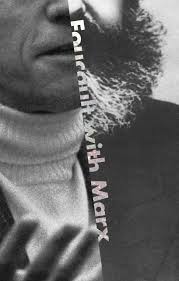 ‘The Marxist tradition has, for some time already, been striving to appropriate Foucault for itself’ (23). At a recent conference in Brighton I happened upon this subject whilst talking to a clique of Marxists. They were unanimous and unequivocal: ‘Foucault was a Marxist.’ I pressed them: ‘Okay, he was a historical materialist.’ This is closer to the mark, but even then I couldn’t help but be sceptical. Quite aside from the explicit rejection he made of such a characterisation, Foucault’s theorisation of the discursive and the non-discursive, the relation he established between the two and the way he introduced agency into this complex relation with his later notion of ‘problematization’ amounted to a subtle rejection of a political analysis that would take the mode of production as the totalising centre of history. Foucault used Marx’s concepts, but without their ground, so to speak.

This question really is important: it is not just some recondite preoccupation for fusty theoreticians. Social activism is today split between two poles: depending on whether one begins at Marx or Foucault or their respective disciples, the means and methods by which society is to be bettered and the targets that will form the focus of resistance will, in many respects, appear radically distinct. On the one hand, Marx constitutes the point of reference for those that would take the major questions of society to be concerned largely with production and appropriation, with the exploitation of both the environment and of labour as a principle of capital accumulation. On the other hand, Foucault is the rallying point for those concerned with the constitution of subjects as a principle of domination, with the ‘treatment of people by people’ (2-3). Of course, each approach claims to have the other as its concern too, but Jacques Bidet’s contention in Foucault With Marx – and I think he is right here – is that because contemporary social critique emerges from these two ‘structurally differentiated sites’, it is subject to a recurrent rift which ultimately weakens any call for a project of ‘universal emancipation’ (3).

Bidet, then, attempts a marrying of Marx and Foucault. He wants to understand the approaches of both thinkers within one and the same theoretical construction. A general corollary presents itself: Marx’s distinction between the legal order – the ‘contractual fiction’ – and the ‘actual’ functioning of power as determined by the relations of production is paralleled, according to Bidet, with Foucault’s distinction between the ‘juridical order’ and disciplinary power. But the marriage that Bidet tries to cement is premised on the inadequacy of one of its partners: a certain ‘lack’ in the Marxian tradition, which opens up the possibility of this conceptual unification. 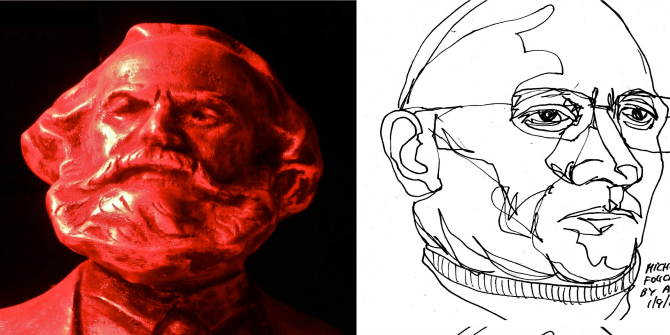 The modern class relationship, Bidet tells us, is premised on the complex combination of two mediations, two modes of social control and coordination: firstly, the ‘market’ (the instrumentalistion of commercial reason) and secondly, ‘organisation’ (the production and governing of individuals). Marx was aware of both of these terms, and we know that he offered, arguably, the most accomplished critique of the former. But of the latter, ‘organisation’, he was neglectful. As Bidet notes, Marx distributed his theoretical pairings – ‘the productive/the unproductive’, ‘managers/subordinates’, etc – around the primary opposition ‘capitalist/wage earner’, thereby diminishing the importance of ‘organisation’.

Another problem is that Marx imposed upon organisation – which was for him the ‘a priori arrangements of ends and means within a production process’, as in the private authority of the factory – a characteristically teleological form. Whilst the passage into socialism sees the logic of the market recede, there would be a correlative rise in organisation (a result of capitalist competition and concentration), and an order of concerted planning, which would be the condition of socialism and socialist government.

There is a sense, writes Bidet, in which Marx places ‘the market on the side of the past and organisation on that of the future’. But Bidet’s contention is that the ‘market’ and ‘organisation’ coexist in modern society; that they endure together; and that they ‘define the constitutive biopolarity of modern class structure’ (71). Organisation reveals itself – and this is where we arrive at the Foucauldian heartland – as a socially reproducible privilege in the form of ‘competency’ (whereas, of course, the reproducible privilege of the market is property). Competency is what one receives from a certain position within the knowledge-power nexus; it is the power of leadership which is linked to a sanctioned knowledge – it is, in essence, ‘expertise’. Crucially, competency, like capital, constitutes a form of power, a power over people.

How does this translate into political strategy? It won’t, of course, be that of those who have historically aligned themselves with Marx – from Lenin to Castro – whereby the economy is released from the law of the market and subjected to democratic control, but wherein a cadre of ‘experts’ forms a new dominant class. Nor will it be a Foucauldian approach, since ‘property-power’ is outside of his remit, even if he does have space for an analysis of labour relations. In fact, Bidet’s articulation of a ‘strategy’ is so concerned with what it will not be that, when it is not the re-articulation of elements already found in Marx and Foucault, the question of what it is grows rather nebulous and, unfortunately, far too abstract.

One wonders, for example, how precisely ‘competence’ is to be appropriated in a similar way to capital or the means of production? So far as this can be gleaned, Bidet intends something not unlike a perfect speech situation: the ‘control of organisation through immediate discourse, equally shared by all (which is ‘‘communism’’ or radical democracy)’ (250). But discourse is not necessarily synonymous with knowledge, or with competency. Moreover, Bidet does not give much attention to those practices which subjects practise upon their selves, which Foucault spent the last years of his life investigating, and which could be said to form a competency of sorts. How would these be subjected to ‘immediate discourse’?

Bidet’s book is highly accomplished and gladly he avoids that (often unctuous) tone of ‘how do you solve a problem like Foucault?’, perennial in these types of theoretical works whereby Foucault is treated as an elusive Marxist who, having had his fun, is now to be returned to the fold. No doubt Bidet’s predilection is for Marx, but he is astute enough with Foucault’s thought to be tactful in his assimilation. However, as superb a theoretical synthesis as this work is, it is of minimal utility given its failure to properly articulate a future political strategy. Moreover, it is abstruse – and though that can be explained by the novelty of its task and the material dealt with, its generally repetitive nature and its verbosity cannot (though the latter may be the fault of the translator). There is much to be recommended in this book, but it will likely only be accessible to seasoned political theorists – which is a shame, given the emancipatory power of the two thinkers here dealt with and the urgency with which solutions to capitalism’s harmfulness are required.