In the new collection Elements of Architecture: Assembling Archaeology, Atmosphere and the Performance of Building Space, editors Mikkel Bille and Tim Flohr Sørensen seek to forge a meeting point between archaeology and architecture through focusing on the link between physical space and our sensual or ‘atmospheric’ encounters with it. While the sheer breadth of material offered by the book verges on dizzying, Mona Sloane welcomes this as an important and critical read that will inspire further research into the relationship between archaeology, atmosphere and architecture. 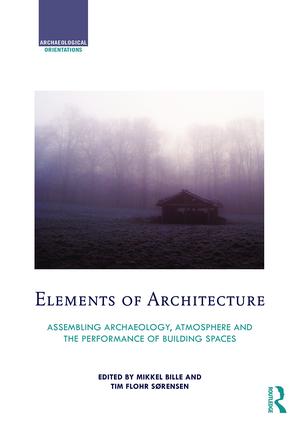 The term ‘atmosphere’ has recently gained new momentum in interdisciplinary academic discourse, much of which revolves around discussions of ‘affect’ and sensual perceptions of place and architecture. This perspective puts the materiality of built space centre stage, emphasising the profound link between our physical environment and perception. This discourse appears to be ahead of, though potentially also complementary to, the ways in which archaeological studies construct the ‘social’, ‘economic’ or ‘cultural’ elements of architecture from found ruins or objects.

The substantial collection Elements of Architecture: Assembling Archaeology, Atmosphere and the Performance of Building Space, edited by Mikkel Bille and Tom Flohr Sørensen, aims to bring current architectural and archaeological thinking together in order to explore the atmospheric aspects of architecture, rather than ‘just’ its functional or aesthetic ones.

Key to this endeavour is promoting an understanding of architecture not as a static entity, but as an ‘assemblage of elements’, tangible and intangible, which oscillate between materiality, performance/process and meaning-making. By not advocating archaeological over architectural studies or vice versa, the ‘ontological vagueness’ (3) emerging from the focus on architectural atmospheres is here placed centrally for the study of built/building space, whether in the past, present or future.

What is most intriguing about this collection is how the editors set the scene: rather than juxtaposing architectural and archaeological studies, they outline a shared ontological problem. By deploying ‘documentation, drawing plans and making typologies’ as strategies to stabilise architecture into ‘bounded and tangible objects’ (6), both disciplines tend to be blind to the affective qualities of space. Departing from this shared problem, the editors provoke analytical tensions among contributions, which they channel intelligently and productively into four book sections: ‘Form and Temporality’ (Part 1); ‘Atmospheres’ (Part 2); ‘Performance and Process’ (Part 3); and ‘Disintegration and Unfinishedness’ (Part 4), each of which is introduced separately. 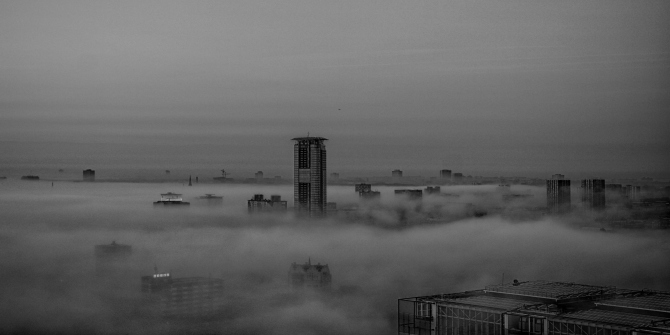 ‘Form and Temporality’ focuses on temporality, motion and scale to explore how architecture gains form. It is premised on the assumption that archaeological studies of architecture have much to contribute to processual understandings of built space as they tend to privilege building practices over buildings as objects. Contributions in this section vary widely, ranging from Lesley K. McFadyen’s piece on the immanent materials that become invisible in archaeological studies of architecture; Michal Murawski on the affective, scalar and political powers of Warsaw’s Palace of Culture and Science; Jonathan Hill’s investigation of ruins and monuments; Gavin Lucas’s on building as constant and dynamic change; Alison Kohn and Shannon Lee Dawdy’s work on informal settlements in Bolivia; to a photo essay by Mark Minkjan and Ingel Vaikla on Brussel’s contested urban condition.

‘Atmospheres’ then explicitly turns to questions around how spaces feel. Focusing on the immaterial aspects of architecture, such as air and light, contributions explore the link between spatial atmosphere, perception and the built environment. Here, Tim Ingold argues for an inclusion of affect, emotion, rhythm, light and air into notions of architecture, which otherwise tend to focus on form. Jürgen Hasse surveys the German intellectual tradition of engaging with the term ‘atmosphere’ to argue for infrastructure, such as bridges or tunnels, as highly affective rather than surplus spaces. Oliver J. T. Harris returns to the notion of ‘assemblage’ to state that architecture is about ‘becoming’, and therefore not only includes the elements that form part of a building, but also a much wider network of human and non-human actors. Closing this section, Serena Love argues for the importance of materials and their meanings in relation to how spaces feel.

‘Performance and Process’ shifts focus to the social dimension of space, how enactments and lived experiences of people structure architecture and vice versa, premised on the understanding that social practices continuously transform built space. The section starts off with Albena Yaneva’s piece on how architectural images work beyond representation to participate in shaping the city. It then moves on to Larry J. Zimmerman’s intriguing work on homelessness and the necessity of home-making under the constant threat of eviction. Drawing on research in Mozambique, Morten Nielsen gives a detailed account of how personhood is deeply entangled with the ongoing process of building a house. The section closes with Nick Kaye’s explorations of the works of artist Vito Acconci and Augusta McMahon’s piece emphasising the significance of lived experience in ancient Mesopotamia.

The last section, ‘Disintegration and Unfinishedness’, turns to the question of what happens to built space when it decays and falls to ruin. Drawing again on assemblage theory, it argues that architecture does not finish when it fails but can adopt new forms of use and experience. Here, Tim Edensor investigates the reuse of industrial ruins in the UK and their newly emerging multiple temporalities. Þóra Pétursdóttir explores how an abandoned Icelandic herring station has become a popular tourist destination, while Michael A. Ulfstjerne investigates architecture and planning in post-economic boom Mongolia to promote an understanding of building as contingent. Jørgen Ole Bærenholdt analyses ‘designed tourist sites’ in Norway to argue that dissatisfaction among tourists may emerge from the fact that these sites are presented as finalised rather than emerging. Rosemary Joyce’s final piece looks at how architecture, materials and people are linked through notions of failure by investigating nuclear waste containment in the USA.

Unmistakably, this edited collection presents an enormous wealth of complementary work that all in some way links to atmosphere, architecture and archaeology. The intellectual ambition of this book is certainly impressive, and the editors deliver significant conceptual legwork to bring analytical frameworks together that have to date been referenced jointly, but never truly linked up. This is an important, if not the main, achievement of the book, but it comes at a cost: some readers may be overwhelmed by both the analytical density and the sheer amount of contributions in this hefty volume.

Though we can agree with the editors’ statement that the diversity of the approaches signals the quality of this volume, we need to ask if such breadth is actually helpful for advancing current thinking on atmosphere, space and the archaeological method, or whether it contributes to conflating these spheres. Perhaps we have to distinguish between the expert and the interested reader: while the book may well become a key work of reference for scholars and practitioners working on the themes it addresses and prompt conceptual and methodological debate, others may choose more selected reading and engagement.

However, what this collection certainly does is bring together some of the most relevant scholars in the field of social science studies of architecture, atmosphere and materiality, which is an accomplishment. Here, works that are grounded in empirical social research undoubtedly are highlights, not least because they take seriously the notion of ‘atmosphere’ which puts people (and not analysts) and their experiences centre stage.

Mona Sloane is a PhD student in the LSE Department of Sociology. She is an ethnographer and her research focuses on the aesthetic economy of spatial design. She holds an LSE PhD scholarship, an MSc in Sociology from the LSE and a BA in Communication and Cultural Management from Zeppelin University Friedrichshafen. She also is co-founder and former member of the LSE-based research programme Configuring Light/Staging the Social which explores the role of light and lighting in everyday life and urban design. Mona works and publishes on the sociology of design, material culture, aesthetics and cultural economy as well as lighting design and public space. Twitter: @mona_sloane. Read more by Mona Sloane.

Posted In: Africa and the Middle East | Asia | Contributions from LSE Staff and Students | Environment | Europe and Neighbourhoods | Science and Tech | Urban Studies | USA and Canada