In No Need for Genuises: Revolutionary Science in the Age of the Guillotine, Steve Jones explores Revolutionary Paris as a ‘city saturated in science’: a flurry of scientific innovation and discovery that seemed to herald the merger of the philosophes and the politiques – until the entrance of the guillotine. While at times hindered by lengthy meanders into the anecdotal, this volume nonetheless provides a glimpse of the intellectual world that gripped France at the time of the Revolution, writes Audrey Borowski.

No Need for Geniuses: Revolutionary Science in the Age of the Guillotine. Steve Jones. Little, Brown. 2016. 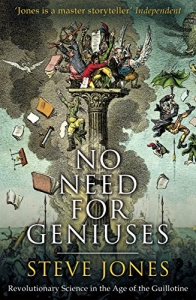 In No Need For Geniuses: Revolutionary Science in the Age of the Guillotine, Steve Jones sets out to explore the common marriage of science and politics during Revolutionary Paris; as he reminds us, ‘as its system of government creaked and fell, Paris had more experimenters and theoreticians than did the rest of the planet put together […] a city saturated in science’ (xi) He purports to investigate the ‘unlikely alliance of technical experts and political thinkers, of philosophes and politiques, each of whom believed that their own field illuminated the other’ (x).

The revolutionary period witnessed a flurry of innovations and discoveries, including a new system of measurement; the emergence of decimal currency; the reform of the economy; a new understanding of chemistry; new weaponry; and pioneering research into the atmosphere. Even though they were largely overshadowed by the political events of the time, these have arguably outlasted them, typically laying the foundations for modern science.

Crucially, the philosophes of the period often held the belief that their scientific expertise should inform matters of state in a bid to produce a rational France. As a result, scientific and political aspirations often went hand in hand: ‘Together, the two groups were convinced, they would lead humankind to an era of inevitable progress’ (x). The physiologist Destutt de Tracy traded biology for philosophy: as he put it, ‘ideology [a word he invented] is part of zoology’. The economist and physicist Turgot attempted to introduce a new fiscal system; the chemist Lavoisier, author of the seminal Traite elementaire de Chimie, played a pivotal role in civic affairs. The mathematician and philosopher Condorcet worked on designing new electoral and educational systems on top of probing the fluid dynamics of canal boards. Author of the Esquisse d’un tableau historique des progres de l’esprit humain, he envisaged the gradual improvement of mankind through the rationalisation of society and the human mind: ‘the sole foundation for belief in the natural sciences is the idea that the general laws that direct the phenomena of the universe, known or unknown, are necessary and constant. Why should this principle be any less true for the development of the intellectual and moral faculties of man?’

In this manner, the years around the Revolution accentuated a trend that had begun with Galileo; the search for an ordered cosmos reached its apex. The mathematician and statistician Simon Laplace, for instance, celebrated the cosmos as a gigantic machine in his work on celestial mechanics published between 1799 and 1825: ‘An intellect which at a certain moment would know all forces that set nature in motion, and all positions of all items of which nature is composed, if this intellect were also vast enough to submit these data to analysis, it would embrace in a single formula the movements of the greatest bodies of the universe and those of the tiniest atom and for such an intellect nothing would be uncertain and the future, just like the past, would present itself before its eyes’ (214).

The cold logic embraced by Laplace was echoed by countless chemists, mathematicians, astronomers, biologists and statisticians’ faith in the power of human reason, its ability to unlock the secrets of the universe, discern its underlying patterns and predict the future. Within this configuration politics often emerged as a mere extension of scientific vocation. As Jean-Sylvain Bailly, an astronomer and mayor or Paris put it: ‘Politics is a science, and I think I have mastered it.’ Like many of his peers, he felt that life was programmed to improve, and that the current spate of scientific discoveries would usher in a new order built on rationalism, equality, openness and secularism.

For many of these scientists, the awakening would be brutal: many were forced to flee, were imprisoned or simply met their end under the blade of the guillotine. Opponents of the Revolution, such as the royalist Antoine Rivarol, blamed their ‘reconstruction of all by revolt against all’. The callousness of these philosophes had driven them to ‘consider men in their experiments no more than they do mice in an air pump […] they would sacrifice the whole human race to the slightest of their experiments’ (24). Robespierre, the same man who had once defended the cause of science as a young lawyer in Arras, also came to denounce them as ‘enemies of the people’: ‘No race of men is more dangerous to liberty, more an enemy to equality, than the aristocrats of intelligence, whose reputations stand alone and exert an influence partial, dangerous, and contrary to the unity which should rule over everyone.’ The common sense of the average citizen should prevail over their dangerous speculations.

The years around the French Revolution also sparked particular interest in the mechanisms of evolutionary change: fundamental laws of intrinsic improvement or decay on scales that stretched from atoms to the solar system. Buffon, for instance, introduced the idea of inbuilt decline in his Histoire Naturelle; this tendency towards decay was embedded in both life and society and had particularly affected the New World. Geoffroy Saint-Hilaire advanced a radical proposal now at the heart of evolutionary biology: that the natural world partook in a universal tie on the basis of its shared ancestry. The biologist Lamarck, in contrast, posited the necessary improvement of the species through the inheritance of acquired characters by the offspring (i.e. the theory that offspring are influenced by the experiences of their parents). Cuvier rejected the idea of biological transformation altogether. Each species had been endowed with a God-given identity from which it could not deviate. Instead, the story of the earth was one of repeated disaster and extinction. He concluded that ‘all of these facts, consistent among themselves, and not opposed by any report, seem to me to prove the existence of a world previous to ours, destroyed by some kind of catastrophe.’ Such ‘revolutions on the surface of the Earth’ had formed the past.

All of these biological theories present strong political resonances – and yet Jones fails to delve into the nexus of biology and civic affairs at any length. The book does not explore how these scientific vocations were carried over to the ideological realm or found practical applications in matters of state and society. Lamarck’s biological theories about necessary progress, for example, found expression in the political and philosophical realms: his concept of ‘le pouvoir de la vie’ (‘the force that perpetually tends to make order’), whereby organisms gradually become more complex through ongoing spontaneous generation, also drove political revolutions. Yet, Jones does not probe this connection. Instead, we are treated to pages and pages on the topic of potatoes: their origin, the different existing strains, their DNA, the pests that afflicting them, their derived products, etc.

While Jones’s book has a promising start, it therefore barely manages to scratch the surface of its purported goal: ultimately, the role of science in the French Revolution – especially in its marriage to politics – remains largely unexplored. Jones’ exposition takes many detours –too many detours – from metabolism, the first forays in human physiology, the Tour de France, the Coriolis force, the invention of ballooning through to the virtues of nitrogen. His tendency to ramble – including one endless chapter on the effects of the Coriolis force and the structure of the atmosphere – drowns the premise of his work in a sea of entertaining albeit irrelevant information.

As a result, the bulk of Jones’s account is confined to the anecdotal and has very little to do with the subject it claims to investigate. The reader is left frustrated and disappointed. This book should be taken for what it is: popular science rather than a rigorous historical account. Still, while it constitutes a missed opportunity, it can be credited with shining a light on an otherwise little-explored subject and providing a taste of the intellectual and social frenzy that convulsed France at the time of Revolution.

Posted In: Europe and Neighbourhoods | History | Philosophy and Religion | Politics | Science and Tech 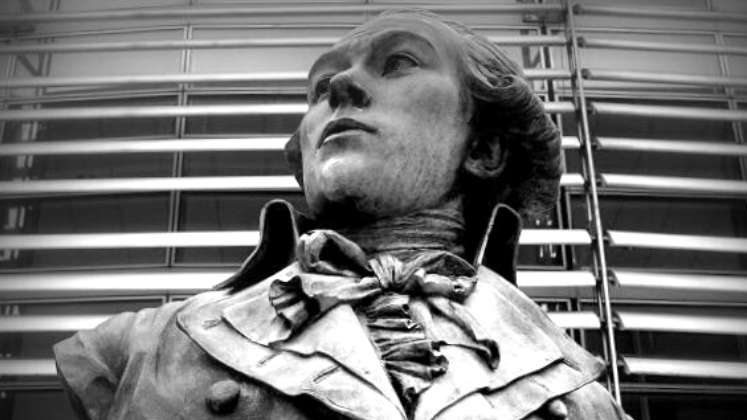