In Adapting to Climate Uncertainty in African Agriculture: Narratives and Knowledge Politics, Stephen Whitfield addresses the pressing issues of smallholder adaptation to climate change and the ‘green revolution’ in Africa, and illustrates how knowledge politics is shaping agronomic development across the continent. This timely volume invites readers to think more critically about the institutional norms behind the scientific research influencing development narratives, writes Remy Bargout. 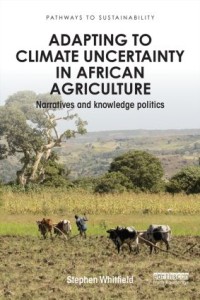 Billions of US dollars have been pouring into international agricultural development on the premise that climate change might obliterate small-scale farms in the Global South. Throw in an ‘African’ context, and this issue becomes an extremely hot button topic in the international development world. Humour aside, the issues of smallholder adaptation to climate change and that of the ‘green revolution in Africa’ are as trendy as they are important. For the swathes of scientists, policymakers and institutions concerned about the future of African food security under climate change, this book offers a timely political account of our best efforts to improve the ecological resilience of small rain-fed farms. In Adapting to Climate Uncertainty in African Agriculture: Narratives and Knowledge Politics, Stephen Whitfield uses case studies to contribute to the growing field of study in ‘political agronomy’ by illustrating how agronomic development in Africa is largely determined by knowledge politics rather than objective evidence.

This book is part of a series produced through the Social, Technological and Environmental Pathways to Sustainability (STEPS) Centre at the University of Sussex. Trained in geography and development studies, Whitfield draws on qualitative observations and interviews from fieldwork in Kenya and Zambia. His critical theory is rooted in a socio-political constructivist perspective of scientific (agronomic) knowledge. Essentially, what we ‘know’ to be scientifically ‘true’ in agricultural development is not really objective. The creation of agronomic knowledge in development is determined by social and institutional interactions. Through deep analysis and a review of the literature – looking at science policy studies that show the institutional brokering of scientific knowledge – the book addresses the question of: ‘What limitations does scientific enquiry have? Particularly, within a complex world of powerful actors and competing narratives?’

Climate impact models are fundamental in the justification of most of our agricultural interventions aimed at improving farm resilience. In earnest, the book begins at Chapter Two by addressing some of the debates over conventional versus participatory methods of climate modelling, along with a need for transparency surrounding the meta-data used for conventional modelling. Chapter Three explains how maize farmers in semi-arid parts of Kenya do not rely on these models when making seasonal decisions about opportunity and risk. Instead, farmers prefer to rely on local indicators and experiences from within their community. This challenges the foundations of agricultural interventions in that some of our broadly held assumptions on the universality of technological adoption are inaccurate. 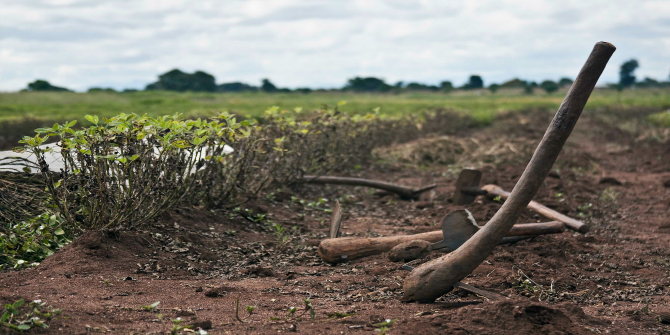 This leads to Chapter Four and the case of transgenic water-efficient maize as part of the ‘green revolution in Africa’. We see how the particular ‘evidence-based’ narrative surrounding improved maize varieties is influenced and legitimised through the knowledge politics and knowledge brokering of donor institutions and multinational agribusinesses. The following chapter explains how the influence of knowledge politics extends beyond controversial agricultural subjects such as Genetically Modified Organisms (GMOs) to include narratives surrounding seemingly benign ecological technologies. The case of conservation agriculture in Zambia and Malawi is discussed. Knowledge gaps in terms of scalar requirements, opportunity costs associated with maintaining important non-farm household sources of income and also in terms of claims made about the ‘climate smartness’ of conservation agriculture, suggest small farmers may not be benefiting from conservation agriculture.

Perhaps the chapter most pertinent to the title of the book is Chapter Six, looking at the scalar requirements of the whole suite of technologies associated with ‘climate smart agriculture’ itself (e.g. integrated pest management, soil nutrient management, agroforestry, System of Rice Intensification, New Rice for Africa). Contrary to ‘evidence-based’ narratives promoting the adoption of universal climate smart technologies, we see there is growing discussion about more diverse and inclusive adaptation strategies that are flexible to the dynamic nature of farming. The final chapter comes off as more of a summary of the author’s ideas surrounding knowledge politics and knowledge brokering, going back to the case of water-efficient maize in terms of Kenya’s governance and biosafety legislation.

By way of critique, Chapter Five has a small sub-section of four paragraphs where Whitfield evaluates the claim that conservation agriculture is a technology that promotes the empowerment of women by reducing labour requirements for manual weeding. Another paragraph in Chapter Six briefly touches upon the gendered division of labour, and how the introduction of new technologies can further marginalise women and female-headed households since women are frequently excluded from accessing outside resources and information. Apart from this, which adds up to no more than three pages of text, the book is generally void of consistent gender analysis. This does not weaken Whitfield’s fundamental argument; however, it would have strengthened it. The vast majority of smallholders in Africa rely on the unpaid labour of women, and most of these are also female-headed households. As such, gender should have been a consistent analytical theme revisited throughout the chapters of the book.

Second to the weaknesses in gender analysis, readers more inclined towards agricultural sciences might have enjoyed further detailed breakdown of the methodologies and data from specific field studies that Whitfield brings up as examples. Peer-reviewed literature that legitimises the claims and narratives around agricultural technologies, along with the associated field trials, often use questionable methodologies and have a tendency to be selective in their interpretation of the data. In this sense, a more technical foray might have been useful, otherwise some readers are sent to do necessary investigation themselves on the precise scientific merit of field trials associated with water-efficient maize, system of rice intensification and New Rice for Africa. A general critique of ‘political agronomy’ discourse as a whole would be to acknowledge the over-emphasis on knowledge politics and the insufficient consideration of gender, agricultural science and the non-institutional grassroots socio-economic variables that play into the overall ‘political-ness’ of agricultural development.

Generally, this book shows us how in agricultural development there are political and financial motivations to generate evidence that supports a certain narrative. Institutions generally have socially constructed norms that influence both the ‘type’ of knowledge being generated and the methodologies used in the process of generating this information or data. This book shows us that there is little exception to this phenomenon in the context of climate change adaptation interventions in Africa. For soil scientists and plant geneticists – and anyone who works in agricultural development – this may seem like a disparaging or offensive stance to take. However, this book shows us that the political-ness of agronomy in the development context is more subversive and unintentional than we might imagine. The application of epistemological theories to the cases of climate modeling in Kenya, the water-efficient maize for Africa project and conservation agriculture in Zambia and Malawi and the broader climate-smart agriculture paradigm asks development practitioners to think more critically about how institutional norms and politics influence the very scientific research that supports the development narratives they are so readily willing to adopt. Whitfield’s take home message, therefore, is that politics are unavoidably embedded within the production of agronomic evidence and that policymaking needs to be reflexive to this process.

Remy Bargout is an MA Candidate in the faculty of Global Development Studies at Queen’s University, Kingston. His current research looks at the adoption of new agricultural technologies in Benin and Uganda, particularly new rice varieties, using a political ecology approach. Broadly, Remy is interested in climate change adaptation, soil nutrient management and other agro-ecological issues related to small-scale rain-fed agriculture in the Global South.

Posted In: Africa and the Middle East | Development | Environment | Methods and Research