Crisis in Sports Governance: Exploring Anti-Doping Policy and Other Battlegrounds (Part One)

The world of sport is facing a serious crisis, deepened by a spate of recent controversies such as match-fixing, doping and the abuse of positions in sport organisations for illicit personal gain. Just in the last couple of months we have seen major scandals, including the arrest of high-ranking FIFA officials, the revelation of a state-sponsored doping scheme of Russian athletes and the discovery of unethical practices by sports professionals (including an apparently rigged judging system in boxing at the Rio Olympics). These pose serious challenges to the governance of sport, domestically and internationally. In addition to public debate about an overhaul of the regulation and governance of sport, scholars have had their say.

This two-part review focuses on two books written on the subjects of integrity in sports and anti-doping policies: ahead of his review of Anti-Doping: Policy and Governance, here Slobodan Tomic reviews The Edge: The War Against Cheating and Corruption in the Cutthroat World of Elite Sports, authored by Roger Pielke Jr, as part of the scholarship contributing to the conversation on ongoing and future challenges to the governance of sport.

The Edge: The War Against Cheating and Corruption in the Cutthroat World of Elite Sports. Roger Pielke Jr. Roaring Forties Press. 2016. 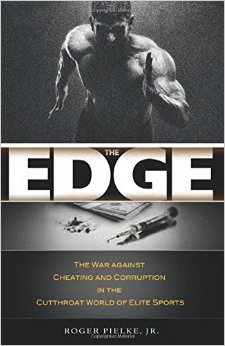 There is growing consensus that the integrity of sport is under threat, but how to address these issues is less clear as it is not easy to grasp the full complexity of sports governance. In The Edge: The War Against Cheating and Corruption in the Cutthroat World of Elite Sports, Roger Pielke Jr offers a valuable contribution to understanding the major contested areas (or ‘battlegrounds’) in contemporary sports – amateurism; match-fixing; doping; the use of technology; and sex or gender testing. Not only was the book published amidst a series of major integrity crises as reform of the international sports movement is becoming widely mooted, but it also coincides with emerging academic inquiry into sports governance that aims to shed more light on the roots and current context of integrity challenges in sport. The writing style is geared towards a wider public that is more or less immersed in sporting events, whether fans, sport industry professionals or journalists.

Pielke’s main argument is that the traditional values of amateurism, purity, uncertainty and autonomy no longer comprise the ‘spirit of sport’. In the twenty-first century, new values have emerged as vital: professionalism, pragmatism, transparency and accountability. Accordingly, goes the argument, the governance of sport needs to recognise this change and to look for solutions to ongoing integrity issues with these values in mind. Drawing on a wealth of stories and data, Pielke illustrates this paradigmatic change across a number of sports, from the US college basketball league through to cycling, football, athletics and others. Yet, while the plentiful examples illustrate well the changing principles across sports, it remains less clear how these values can be concretely embedded in the architecture of sports governance.

In Chapter Three, Pielke contributes to conceptual clarification of cheating in sport. There has been much talk of unethical practices in sports from match-fixing, underhand action by athletes (e.g. tactical medical time-outs in tennis, the strategic losses of matches and alterations to the pitch) to favouring one of the competing sides through the competition format and management – but are all these instances of the same ‘order’ and damage to the integrity of sport? No, argues Pielke: there is a variety of unethical behaviour. Depending on two key dimensions – violation of game rules and violation of (unwritten) norms – three sorts of dishonest behaviours are derived. These are (1) cynical play, when both values and rules are violated by an athlete/team (e.g. fouling another player while simulating an injury to oneself); (2) gamesmanship, when norms are violated, but rules are not (e.g. unforced medical time-outs); and (3) penalty, when norms are not breached but rules are, for which a consequence to the breaching side is envisaged as part of the game (e.g. awarding a foul or free throws to the aggrieved team). (The fourth is a non-cheating behaviour – ‘ordinary play’ – which breaks neither the game rules nor norms). 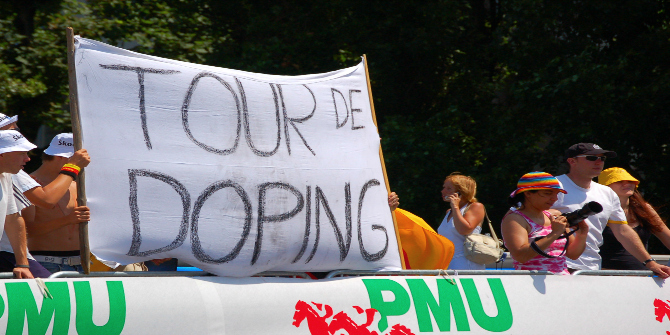 The problem with sport is not in pursuing one of the first three, but rather in a fifth mode of behaviour – breaching constitutive rules. Constitutive rules are ‘rules about rules’ that are not part of the game and for whose violation there are no negative points within the game itself. All participants are obliged to adhere to those constitutive rules all the time (e.g. not to play doped). While this description may sound straightforward, it brings the necessary clarity to cheating behaviours in sports, isolating the key pernicious issue – flouting constitutive rules – that the regulation of sport needs to address. The question is how to set constitutive rules given developments that allow novel ways of unethical conduct for the purpose of gaining ‘an edge’ over the competitors, whilst at the same time avoiding unjustly aggrieving regulated athletes.

The second part of the book discusses five specific ‘battlefields’ that have recently witnessed major integrity challenges. For each of these battlefields – amateurism, match-fixing, use of performance-enhancing technology, sex or gender testing and doping – Pielke provides engaging stories from a variety of sports, both national and international. The book’s approach is to cite individual examples first, analysing relevant headlines, front pages, anecdotes, data and interviews, and then to point to a broader systemic problem illustrated by this story that has implications for the constitutive rules.

Thus, to show how contentious the role of science, or those applying science, can be in anti-doping testing, Pielke recaps the cases of Norweigan race walker Erik Tysse who claims to have been unjustly sanctioned by a Rome-based anti-doping laboratory; the American NCAA basketball college league as an example of how ‘outdated’ sports amateurism is; debates over the eligibility of the use of prostheses by Oscar Pistorius to compete in the 2012 Olympic Games; and the childhood intake of growth hormone by footballer Lionel Messi. These are offered to demonstrate some of the ethical dilemmas and possible inconsistencies in treating technology-based ‘performance enhancers’. Even when the author’s main point becomes repetitive or inconclusive in the details, they are very helpful in highlighting the problem of designing rules to tackle key integrity challenges in modern sport.

Just when Pielke has presented the reader with all the issues and the expectation arises that the narrative will turn to possible remedies, it is claimed that no simple solutions to such ‘wicked problems’ are possible:

The book’s goal, however, is not to provide answers. The objective is to open a door to a fascinating topic so you can think about sport in new ways. Sport needs more thinking, more debate, and more out-in-the-open discussion.

Pielke does not discuss particular elements of international sports governance that can be improved. Instead, he reminds readers of the ways that scientists can engage with policymakers and real-world problems. From among the possible roles of ‘pure scientist’ (who only seeks to establish facts and truth), the ‘scientist arbiter’ (whose advice is solicited by decision-makers), the ‘issue advocate’ (who has interests in certain solutions) and the ‘honest broker’ (who points to the limitations of scientific knowledge and brings clarity to understanding a complex problem without offering solutions), Pielke takes up the role of the latter.

Despite the lack of detailed discussion about ways forward in sports governance, The Edge is an informative and engaging read that enhances our knowledge of major challenges to the integrity of sport. The wealth of information and sources it offers, the conceptualisation of the ‘spirit’ of, and cheating in, sport and the author’s framing of key principles on which the forthcoming debates on sports governance must centre adds greatly to understanding the core of integrity-related issues in sports governance. There are diverse audiences this book can be valuable for: the general public who wants to learn more about this topic; sports fans; industry professionals and journalists who will probably be familiar with some of the content but can gain a number of new useful insights; and scholars from several fields including (applied) ethics, sports governance, regulation and international public policy. The book is also relevant for discussions on the application of science in public policy – its role and the limitations in its use. Yet, whoever the reader, there is little doubt that the author has succeeded in his intention that ‘people want to discuss [the book] at the dinner table’.

Dr Slobodan Tomic is a Research Analyst at I Trust Sport, a London-based sports governance consultancy, and a Teaching Fellow at the School of Public Policy at the University College, London (UCL). He obtained a PhD from the LSE Department of Government.