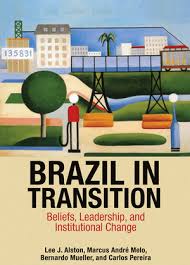 Do beliefs create fiscally sound social inclusion in Brazil? Brazil in Transition: Beliefs, Leadership and Institutional Change contributes to the modernisation ‘transition’ literature by offering a case study of Brazil’s economic and social development since the transition to democracy in the 1980s. Lee J. Alston, Marcus André Melo, Bernardo Mueller and Carlos Pereira argue that recent national development can best be understood through the onset and evolution of ‘dissipative inclusion’: a process driven by beliefs in fiscally sound social inclusion and aversion to inflation (14). They propose that ‘beliefs are the key to understanding institutional change and that we need to understand what leads to changes in beliefs, especially among those in the dominant network of power that structures institutions’ (15).

Accordingly, ‘windows of opportunity’ infrequently emerge and lead to significant belief changes that redirect leaders of the dominant network (organisations in power) to transform the institutions that regulate state-society relations and guide national development. For the authors, the transition to democracy in the 1980s constituted just such a window of opportunity and led to dissipative inclusion, a necessarily ‘messy and often disordered’ process that features greater social participation in the economy and politics, but also increased market distortions as groups struggle to both resist and advance rents and income redistribution.

Brazil in Transition offers a comprehensive account of the country’s return to democracy in the 1980s and the evolution of economic and social policies following the enactment of the 1988 Federal Constitution. This detailed analytical narrative is the strength of the book and worth the read.

It makes sense to pursue alternative approaches to explain Brazil’s transition to democracy in the 1980s, the stability achieved in the 1990s and the economic growth with social inclusion that was consolidated during the first decade of the twenty-first century. Marcos Mendes argues in Inequality, Democracy and Growth in Brazil that Brazil’s slow growth under democracy can be accounted for by the expansion of rent-seeking and redistribution under democracy, or what he calls ‘dissipative redistribution’. Here, Alston, Melo, Mueller and Pereira conversely ‘expect Brazil to make the critical transition to a society more akin to the current developed countries in the world’ (216) because of the enduring and widespread belief in the developmental effects of fiscal stability and social inclusion. The authors recognise that Brazil will experience ‘bumps in the road’, and in the ‘Afterword’ mention that the political crisis brought on by the Lava Jato corruption scandal serves as a critical stress test for Brazilian beliefs and dissipative inclusion. If Mendes is pessimistic because he understands that dissipative redistribution is toxic, then the authors of Brazil in Transition exude optimism that Brazilian beliefs can eventually overcome the economic distortions created by distributional conflicts under democracy. 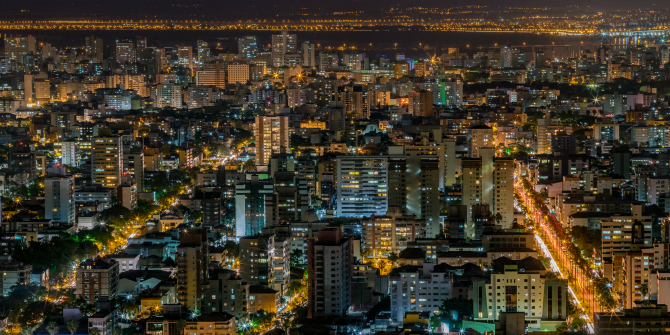 The authors examine Brazilian beliefs in both comparative and historical contexts. They draw on the World Values Survey to show that increasing numbers of Brazilians, along with Russian, South Korean and Indian respondents, reported that government should take more responsibility for citizens’ welfare as measured between the periods of 1989-2003 to 2010-14 (30-31). Also, Brazilian respondents increasingly pointed to ‘hard work’ as the determinant of welfare rather than luck or connections. The authors use this to argue that Brazilian beliefs in fiscal stability and social inclusion grew under democracy and were consolidated during the last decade. They propose:

The exceptional shift in Brazil from luck toward hard work as a determinant of success is a consequence of the demise in the later period of the hyperinflation that scourged the country at the time of the first survey. It is natural to despair at the value of hard work when the relentless hyperinflationary process crushes even the most diligent projects and efforts (31-32).

Brazil in Transition provides a detailed and compelling narrative of the disappointments experienced under the first two civilian presidential administrations of the democratic period (José Sarney (1985-89) and Fernando Collor (1990-92)). The authors’ analysis logically leads to the proposition that these early outcomes set the conditions for a ‘window of opportunity’, wherein Fernando Henrique Cardoso as Finance Minister in 1993 worked to tame hyperinflation and moved on to win the 1994 presidential election.

Alston, Melo, Mueller and Pereira reveal that beliefs can vary over time and across nations, but their analysis falls short of tracing the emergence and consolidation of widespread national beliefs in the virtues of fiscal stability and social inclusion under democracy. They insist that their book provides ‘much additional evidence that corroborates the central role played by the interaction among beliefs, institutions, and outcomes in the Brazilian transformation’ (33), but also admit that there is no ‘silver bullet to prove our contention’.

Unfortunately, the authors present little evidence that beliefs played a central role in Brazilian economic and social development under democracy. The World Values Survey measures are interesting, but not directly associated with the book’s assertion that Brazilian beliefs underwent significant change during and since the transition to democracy, and that these triggered major fiscal and social policy reforms.

The authors’ examination of this period does successfully document Cardoso’s presidential leadership, which consolidated the Real Plan through constitutional amendments and tight fiscal management and targeted earmarked spending to retain a congressional majority. Yet, the narrative lacks any empirical foundation of Brazilian beliefs and how they may have played a central role in framing the moment, Cardoso’s policy leadership and fiscal stability strategy or the implementation of inclusionary policies such as the Bolsa Escola. The authors are correct to point to this moment as a critical juncture that further consolidated Brazilian democracy and created the conditions for both future growth and social inclusion, but they neither identify Brazilian beliefs before or after this moment nor demonstrate any positive association between beliefs, Cardoso’s leadership and development outcomes. The book also examines the period of 2002 to 2014 under the Workers Party-led government of Presidents Lula and Dilma, but again without offering empirical evidence of ‘deepening beliefs’ in fiscally sound social inclusion. The book also features an attempt to ‘illustrate’ the authors’ model with reference to Argentina, but this effort distracts from the major mission of the book.

Alston, Melo, Mueller and Pereira should be applauded for developing an alternative model to explain Brazilian development under democracy. Their book makes an important contribution by featuring an analytical narrative that indirectly raises important questions about the sources of economic and social policymaking. What does the belief in fiscally sound inclusion mean? How do Brazilians understand fiscal stability as both a set of policy preferences and outcomes? How do interpretations of fiscal policy frame or limit Brazilians’ understanding of social inclusion? Have these meanings changed over time to become more or less popular or accepted? It is important to reveal the observable relationships between what Brazilians think and believe and how these factors shape political behaviour at the individual and organisational levels of analysis. How do we know that the ‘dominant network’ of power organisations and their leaders effectively incorporate beliefs into actions and, ultimately, government policies and programmes that characterise dissipative inclusion?

These questions are central to advancing the mission of the book. We need to fully explain the role of beliefs in shaping the institutions and leaders who guide dissipative inclusion as a form or expression of national development. This mission is currently incomplete, and our search for answers to understand Brazilian development under democracy still faces more than just a ‘bump in the road’.

Mark S. Langevin is Director of the Brazil Initiative and Research Professor at the Elliott School of International Affairs, The George Washington University. He has a PhD in political science and an MA in Latin American Studies from the University of Arizona, and researches and writes extensively on Brazilian energy policymaking and US-Brazil relations. Read more by Mark S. Langevin.