In Gender and the Great War, editors Susan R. Grayzel and Tammy M. Proctor offer a new collection exploring the role of gender in wartime, examining diverse experiences of World War I that extend beyond the Western Front. While the book is occasionally hindered by the scope of its ambition, this is an insightful, balanced and admirably wide-ranging volume that offers a valuable introduction for new students and supplies ample food for thought for seasoned scholars in the field, finds Matthew Kovac. 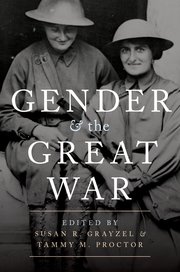 With the centenary of the 1918 Armistice fast approaching and a resurgence of feminist activism sweeping Europe – most notably, the strikes against abortion bans in Poland and Ireland – Susan Grayzel and Tammy Proctor’s Gender and the Great War could not arrive at a better time. The wartime discussions that divided women 100 years ago, pitting gender, national and class loyalties against one another, remain alive and well today in critiques of ‘white feminism’ and its ongoing complicity in capitalism and empire. As debates continue to rage about the relationship of feminism to other liberation struggles, the history of the First World War is long past due for an intersectional update.

True to this historical moment, Gender and the Great War is an ambitious project. Though a fairly slim book at 258 pages plus bibliography, its thirteen edited chapters – rather grandly titled ‘Gender and Violence’, ‘Gender and Race’, and so on – give some indication of its vast scope, as does the multinational contributor list, which features war and gender studies scholars from the United States, United Kingdom and Australia. Despite this decidedly Anglo-American line-up, the collection is globally minded, expanding the traditional Western Front focus to include neglected theatres in the Balkans, Eastern Europe and Africa. The Western Front, too, gets a postcolonial makeover with a case study detailing colonial troops’ encounters with local white women – and the ensuing tensions with segregated US forces. While Christopher Nolan’s recent film Dunkirk controversially left the Second World War sacrifices of Indian troops on the cutting room floor, here they are restored to their rightful place in the earlier war’s historiography, along with Chinese labourers and African porters.

The result is a remarkably insightful and balanced introductory volume, well-suited for survey courses and First World War researchers and a valuable contribution to the literature in its own right. All the classic studies can be found cited here, from Joanna Bourke’s Dismembering the Male to Jeanette Keith’s Rich Man’s War, Poor Man’s Fight, while several contributors bring their work into conversation with more recent scholarship by embracing Robert Gerwarth’s conception of the ‘Long First World War’ that stretched from 1911 to 1923. It also engages with new research on the East African front, bringing the experiences of black women to the fore by exploring the dynamics of ‘war families’ – caravans of women and children that lived, worked and marched, with varying levels of coercion, alongside the colonial troops.

But Gender and the Great War is more than a handy reference guide. Its chapters yield numerous illuminating and often surprising insights, particularly for casual readers, for whom the fact of intimate relationships among soldiers in the trenches – a subject given short shrift by school textbooks – may come as a revelation. Expanding on this theme, Ana Carden-Coyne and Laura Doan’s chapter on ‘Gender and Sexuality’ skilfully deconstructs the myth of heterosexuality as a timeless, hard-and-fast category, showing how fixed sexual identities were only created and superimposed onto wartime conduct decades later. Governed instead by codes of respectability and self-control, the soldiers themselves would have found modern labels ‘baffling’ – a timely warning that viewing the past through the lens of the present can produce ahistorical results (95). 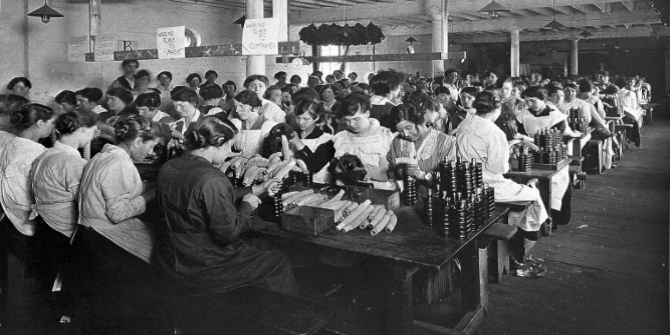 Meanwhile, in another standout chapter on the home front, Karen Hunt convincingly argues that for most women, the fundamental experience of the war was found not in nurses’ quarters or munitions factories, but in the food queue, trying to stave off their children’s hunger amid wartime rationing and skyrocketing food prices. Drawing on diary entries and media reports, Hunt demonstrates how the heightened gendering of shopping and cooking as women’s duties left them wholly responsible for feeding their families even as food grew scarce and tensions rose.

Where Gender and the Great War really shines is in Hunt’s richly detailed descriptions of the women’s insurgency that followed. Wartime pressures exploded into the open as ‘unorganized housewives’ launched food riots, boycotted price-gouging farmers and demanded – and in some countries received – communal kitchens (149, 162-63). Even with the local colour captured by Hunt’s impressive deployment of primary sources, though, some questions go unanswered. How did these spontaneous mobilisations play into the fight for suffrage? Were they welcomed by the official women’s organisations or resented as an affront to formal feminist politics? Sadly, this link between women’s economic and political questions never quite swims into view.

Similarly noteworthy are Joy Damousi’s reflections on ‘Gender and Mourning’, which explore how gender norms ritualised women’s public expressions of grief while enforcing stoicism among male mourners. Here too, however, certain lines of enquiry go untapped. Damousi takes claims of male stoicism more or less at face value, failing to account for how their mourning may have manifested in other, less public ways. While male veterans and surviving kin may have outwardly maintained the ‘stiff upper lip’ and thus appeared to fulfil their masculine obligations, official statistics on alcoholism, mental illness and suicide would likely reveal a crisis brewing under the surface – just as they do today in the case of US veterans returning from Iraq and Afghanistan. Further research into how men channelled these repressed emotions is needed.

More than anything else, such limitations are a reflection of the book’s vast, even sprawling, scope. The early chapters in particular suffer from a bird’s-eye view of history that tends to favour paraphrase and macro-level analysis over the rich historical texturing offered by direct quotations from first-hand accounts. This sense of distance is reflected in the endnotes, which depart from Hunt and Damousi’s granular approach with a pronounced reliance on secondary studies. Consequently, some fascinating primary source materials – like records detailing the plight of ‘enemy alien’ US women who lost citizenship by marrying German immigrants – merit only a brief mention before their exile to the footnotes (20-21).

Nor is the breadth of this material well-served by the overly broadly characterisations that appear in several chapters. ‘Traditional ways of thinking about gender during war were both adhered to and disrupted by the Great War,’ writes Erika Kuhlman in one historically sound and yet nonetheless frustratingly vague passage (42). This truism reoccurs so often in various forms throughout the book that it comes as a relief, some 200 pages later, when contributor Karen Petrone comes down solidly on one side of the continuity-rupture debate, concluding that ‘overall […] the field of war memory tended toward reinforcing and stabilizing traditional prewar and military roles’ (244).

Still, Gender and the Great War offers critical lessons for today’s feminist movements, even if it sometimes requires reading between the lines. By juxtaposing European suffragists’ ‘patriotic support’ for the war effort with the harsh realities of what that war entailed for other women – from hunger and displacement to sexual violence – the writers reveal the inescapable intersections of the domestic and international, centre and periphery, and how compromises made for ‘domestic’ political gains are often paid for with blood in other places. The chapters on colonial warfare, in particular, support arguments for the addition of ‘imperial privilege’ to the feminist lexicon.

And yet, as the book ably chronicles, women’s support for the war did not necessarily translate into expanded freedoms or economic opportunities afterward. Women were, for the most part, ushered back out of the factories after the Armistice (62). Full suffrage was not achieved in Britain until 1928, while it took a second war for French women to finally win the vote in 1944. Taken together, the massive human toll of the war and its underwhelming ‘peace dividend’ support the contention of internationalist women, socialists and pacifists chief among them, that the war reinforced the oppressive structures they sought to supplant. Their voices are echoed today in calls for an explicitly race- and class-conscious politics of women’s solidarity, one that stands in stark contrast with the imperial feminism of Theresa May and Hillary Clinton.

Ultimately, if Gender and the Great War takes on more than it can fully address in its spare page count, that is to its editors’ credit – far better for the field to leave some questions unanswered than to not raise them at all. Even under these constraints, Grayzel and Proctor’s collection offers an admirably thorough treatment of gender in wartime, providing a much-needed introductory framework for casual students of the war while supplying ample food for thought for seasoned scholars. As modern feminism continues to grapple with the imperial legacies of the First World War, this work is sure to remain burningly relevant for quite some time.

Matthew Kovac is a master’s student in modern European history at the University of Oxford, Keble College. His research focuses on Irish veteran reintegration and paramilitary violence in the wake of the First World War. Follow his work @MatthewKovac.

Posted In: Africa and the Middle East | Britain and Ireland | Europe and Neighbourhoods | Gender and Sexuality | History