In The New Nature Writing: Rethinking the Literature of Place, Jos Smith explores the various contemporary permutations of ‘New Nature Writing’, emphasising throughout the complex relation between literary production and environmental activism. The book does important work in helping to institutionalise ‘New Nature Writing’ in an academic context, writes Rebecca Pohl, but the particular selection of texts suggests that the genre needs to further interrogate its own politics of representation. 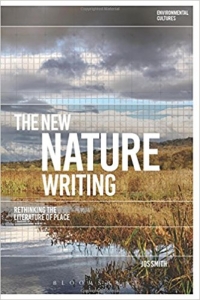 As James English has shown, literary prizes are key markers and producers of value. The Wainwright Golden Beer Book Prize, which rewards ‘writing on the outdoors, nature and UK-based travel writing’, does this work for the texts most often subsumed under the heading ‘New Nature Writing’: it institutionalises and validates them. As any brief search shows, New Nature Writing is an established thing, and a thing that often causes quite a stir – for its exclusiveness, for its non-newness. Jos Smith’s monograph on the form reinforces its currency in an academic context.

The New Nature Writing: Rethinking the Literature of Place navigates this stir in engaging prose that focuses on innovation while keeping sight of a formal and political tradition. Indeed, one of the pleasures of the study is precisely its insistence on a heritage of nature writing (Richard Mabey, but also, perhaps more interestingly, Raymond Williams). Smith returns the reader’s eye to this lineage again and again as he moves through the case studies he has assembled as representative of New Nature Writing in its contemporary variations. While acknowledging that ‘British nature writing wears its title with some anxiety and discomfort’ (13), the book embraces the terminology and reads its corpus as ‘ground[ed] […] in a culture of environmentalism and conservation practice’ (4).

The insistence on the complex relation between literary production and environmental activism is one of the most compelling aspects of Smith’s study, and it is especially persuasively articulated in the first chapter, ‘The Local’. This highlights the important interconnections between writing, institutions and activism by opening in 1984 at an Institute of Contemporary Arts event in London, before turning to the literary works of Roger Deakins, Alice Oswald and Tim Dee. The chapter stands out for the archival recovery it performs in its narration of Common Ground’s community project Confluence (1998-2001), drawing on the charity’s newsletters of that time. Here, Smith makes a careful case for literary writing as engaged with and even itself a form of activist practice.

In an age of globalisation, the idea of the local can signify both mindful consumption and troublesome nationalism. Smith uses the writings of Deakins, Oswald and Dee to simultaneously complicate and reinvigorate the term for a progressive politics. Emphasising, for example, the collaboration between poet and locals at the heart of Oswald’s Dart, his reading of the poem concludes that ‘Oswald shows even the one region to be intricately composed of disparate voices’ (58). For Smith, the local is a question of scale: ‘In this tradition the local is not a site of retreat but a vital scale at which we can apprehend the changing world in which we live’ (43). Ridding the local of its parochial resonances, Smith uses scale to offer a persuasive reconfiguration of the local within the global through literary writing and its interplay with grassroots environmental activism.

Image Credit: ‘diary on the grass’ by ausmeesri licensed under CC BY SA 2.0

As in most writing on space and place, visual metaphors abound in Smith’s study. Alongside scale, perspective is a term that is central to chapters dedicated to the edgelands and to the periphery, respectively. It is the question of scale, however, that is crucial to this book, in form as much as in operation. Smith’s study takes a cross-media approach to the question of nature writing. His readings include literary non-fiction, as is to be expected, but they also cover poetry, institutions such as the journal Archipelago and visual art in the shape of Tim Robinson’s mappings. Drawing together these varied sources, Smith  focuses on connections rather than differences. The approach leads to great breadth of discussion in terms of form and means much attention is paid to careful historicising, even if – returning to the question of scale – close reading is sometimes too swiftly forfeited for historical and contextual vistas.

Next to scale and perspective, the third key term that emerges from Smith’s journey through New Nature Writing is ‘experimental’. In another visual metaphor, it is defined as ‘fresh ways of looking’ (53), referring to both formally innovative writing and located practices such as Scottish rewilding initiatives, but also more broadly to ‘literature as an experiment in place’ (21). There is, of course, a tradition associated with the notion of ‘fresh ways of looking’: John Berger’s ‘Ways of Seeing’ (but also his decision to move to a remote village in the Haute-Savoie in 1974 to live with people closer to the land) and Griselda Pollock’s feminist art history writing spring to mind. Both are interested in the ways humans look at place, and the power relations that condition and are reproduced in the subject/object divide. Power is, to my mind, a concept conspicuously absent from Smith’s discussion, and it leaves issues of representation relatively unexamined.

Smith’s study does important work towards institutionalising New Nature Writing, consistently treating it as a complex, multifarious genre that is intimately connected to socially engaged environmental activism. It also archives the genre’s current permutations. Archives do valuable work in the fields of cultural and literary production. Like the prize, they are a way of institutionalising a form. However, with such institutionalisation comes responsibility, and it would have been good to see the same breadth of reference that is made to formal variations made to its producers. New Nature Writing has struggled with issues of gender, sexuality, class and ethnicity from its first moment, and Smith’s corpus reproduces these issues. As Smith shows, nature writing is and has been a political form, hence it must consider its own politics of representation and work actively to expand its canon. Here, only two of the case studies are texts by women, and the section on Kathleen Jamie gives over a lot of space to Robert Macfarlane, reading the feminist critique through the patriarchal frame. There is also no discussion of class, despite the allegiance to Williams, and not a single mention of race. If New Nature Writing is truly this homogeneous, then that needs to be interrogated – and critiqued, rather than accepted and reproduced.

Smith’s widely referenced survey offers a strong starting point for this further investigation, and it will be good to see readings of Melissa Harrison, Olivia Laing, Amy Liptrot, Sara Maitland, Anna Pavord, to name only a handful, as we expand the field and commit to the politics of equality central to environmentalism.

Rebecca Pohl is the co-editor of Rupert Thomson: Critical Essays (2016). She has also published on Sarah Waters, and forthcoming articles include pieces on Ali Smith and on Christine Brooke-Rose looking at different forms of the institutionalisation of literary value. Her work in progress includes a monograph study of Christine Brooke-Rose and the publication and institutional consecration of experimental women’s writing in the context of late modernism. Rebecca is Honorary Research Fellow at the University of Manchester, and supervises on the contemporary paper at the University of Cambridge.

Posted In: Art, Lit and Film | Britain and Ireland | Environment | Gender and Sexuality