In Rebelocracy: Social Order in the Colombian Civil War, Ana Arjona challenges dominant accounts of the actions of rebel groups in civil wars by examining the formal and informal institutions that rebel organisations establish to govern civilian populations, drawing on fieldwork conducted in Colombia between 2004 and 2012. This is a valuable addition to the critical literature on rebel governance, writes Anastasia Shesterinina, that will be of interest to those researching how everyday life transforms during civil war. 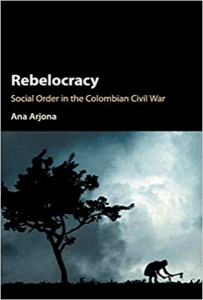 In contrast to dominant accounts of rebel groups in civil wars as unruly, greedy and short-sighted, rebel organisations establish complex systems of governance in the territories that they control, taxing civilians, providing health, education and police services and instituting courts to adjudicate disputes. Ana Arjona’s Rebelocracy: Social Order in the Colombian Civil War is a critical addition to the research programme on rebel governance that seeks to understand the types, patterns and variation in formal and informal institutions that rebel organisations set up to govern civilian populations under their control. As Nelson Kasfir characterises this field:

building a subject area of rebel governance […] means ﬁnding its boundaries, determining which activities by insurgents amount to governance, deciding which structures and actions to include, and deciding the basis on which differences among them should be evaluated (2015, 21).

Having been instrumental in developing this subject area (see the preceding co-edited collection, Rebel Governance in Civil War), Arjona achieves each of these objectives in Rebelocracy.

Rebelocracy opens with a puzzling observation—that ‘far from being chaotic and anarchic, war zones are often orderly’—and asks what explains order and why it takes different forms when it emerges in civil wars (2). The book takes as a starting point the importance of territorial control for the warring sides and their interactions with civilians. While the existing literature focuses on violent interactions (Stathis Kalyvas, 2006), Arjona argues that ‘our understanding of the conduct of war as well as its legacies demands a theory of the creation of social order during wartime’ (9). Arjona’s theory centres on the goals of rebel groups to control territory and maximise the by-products of this as access to material resources and recruits. Since governance helps advance these goals, rebels will prefer order to disorder and rebelocracy to aliocracy—the types of order during wartime, with the former characterised by broad rebel intervention in civilian affairs, while in the latter these affairs are left to state officials, traditional leaders or other local actors.

Arjona explains the variation in rebelocracy, aliocracy and disorder across time and space through the combination of armed groups’ time horizon and the quality of preexisting local institutions. Most rebels care about future outcomes and will seek to regulate private and public life broadly to induce civilian cooperation in areas where they have an ongoing presence. Particularly, they will establish mechanisms to adjudicate disputes, such as courts, as the administration of justice helps ‘armed groups centralize power and build an aura of legitimacy’ (56). Where preexisting institutions shape the capacity for civilians to collectively resist rebel rule and maintain control over civilian affairs, rebels will limit their influence and focus on basic elements of rule: that is, security and taxation. Under certain conditions, when rebels face internal indiscipline, external competition over territory or macro-changes in the war, such as peace negotiations, their focus on short-term goals will lead to disorder, or the absence of social contract in the communities. 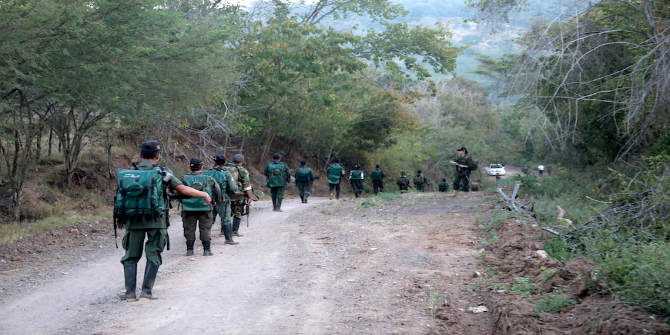 Arjona tests her theory using original data, including surveys, interviews and memory workshops, collected in Colombia between 2004 and 2012. Detailed data on social order was gathered after the theory was developed to get at the previously-theorised hypotheses about variation in social order, underlying causal mechanisms and assumptions about individual behaviour. A variety of methods—from statistical analysis of a dataset on over 100 armed group-community dyads and its randomly selected sub-sample, to case studies, process tracing on a quasi-natural experiment of three communities and examination of individual-level data on recruitment—allows for evaluation of different components of the theory at the appropriate, local level of analysis. Supported by this and studies surveyed for this project, Arjona concludes with confidence that her theory not only holds across Colombia, but also ‘travels across many cases’ (303). The parsimony and methodological rigour underlying these research results are the major strengths of Rebelocracy.

A number of questions deserve further attention. First, ‘wartime social order’ is defined ‘as the particular set of institutions that underlie order in a war zone, giving place to distinct patterns of being and relating’ (22). It is marked by clear rules and expectations and is distinguished from uncertainty. How do these rules come to be, and how are they communicated to civilians to form shared rather than diverse expectations, particularly when rules change? Can other expectations emerge from prior knowledge, observation of armed actors’ behaviour, community discussions or norms? What is the process of socialising a population into a new order: what is the temporal scale and what proportion of the population should abide by these rules for a new order to hold? What are the nature and extent of collective resistance needed to sway this order? Future work should extend the discussion on how communities transition to new social orders.

Second, forms of uncertainly can persist even in the areas where wartime institutions are set up, especially if the patterns of fighting change and governance structures transform during the war (Zachariah Cherian Mampilly, 2011). Can civilians anticipate changes in territorial control or shifts between order and disorder? Does potential rebel indiscipline create continued fear for civilians, and what role do revenge and hatred of individual members or entire communities by combatants play in this relationship? What level of indiscipline is needed for the order to fall and uncertainty to emerge, and how do civilians react to this uncertainty? Do they continue to cooperate with armed actors or does non-cooperation follow? How rebel organisational structure, wartime institutions and patterns of civilian cooperation change in the course of the war should warrant further analysis.

Finally, the book makes a number of assumptions. In particular, it assumes that rebels aim to control territory as a means to increase organisational capacity and strength vis-à-vis the state (9) and to establish rule over civilians to induce cooperation, ‘which in turn is crucial to maintain territorial control’ (18). It furthermore assumes a level of information with which actors operate: for example, rebels’ ‘expectations of collective resistance’ (77). The support offered in the analysis advances the discussion of the relationship between territorial control, social order and civilian cooperation, but calls for further systematic research on what territorial control helps achieve, how wartime institutions help induce civilian cooperation and what mechanisms link civilian cooperation to further territorial control in conditions of limited information. In these ways, Rebelocracy opens fruitful avenues for future research in the field on rebel governance.

Rebelocracy will be of interest to anyone concerned with how everyday life transforms during civil war, what options are available to civilians when armed groups establish control over their localities, what combatant interactions with civilians look like under the conditions of ongoing armed presence and what implications the difference in these interactions has for war and post-war outcomes. For civil war students, the book shifts attention from a focus on violence against civilians to political institutions that structure civilian life during wartime. For scholars of state formation, it offers a systematic account of the processes that unfold when state institutions are challenged by war and some rebel groups function as proto-states. For political scientists more generally, it engages a key theoretical issue of the interaction between institutions and civilian agency, and sets an example of methodologically rigorous research that tackles a question from multiple angles. Finally, for policymakers, journalists and observers of Colombia, Rebelocracy sheds light on the decades of war that the recent peace agreement in the country aims to address. For these reasons, I highly recommend Rebelocracy for academic, policy and public readership.

Anastasia Shesterinina is Lecturer (Assistant Professor) in Politics/International Politics at the University of Sheffield. Her field-based research on the Georgian-Abkhaz war of 1992-93 explores the internal dynamics of armed conflict, with a focus on mobilisation. Her parallel research looks at the norms and practices of civilian protection in armed conflict. Anastasia’s work has been published in American Political Science Review, Journal of Peace Research, Cambridge Review of International Affairs and International Peacekeeping.