In April 2018, Penguin launched their new ‘Penguin European Writers’ series, which features forgotten twentieth-century classics by authors of different European nationalities. To find out more, we spoke to the editor who commissioned the series, Isabel Wall. 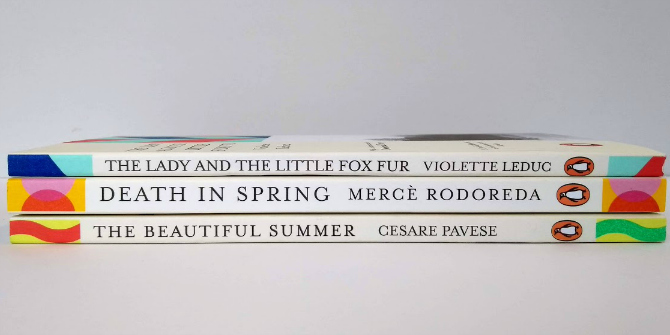 Q: What are the titles in the ‘Penguin European Writers’ series, and what drew you to these books in particular? 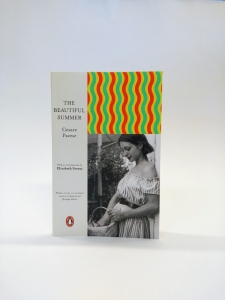 The first title in the series is Death in Spring by Mercè Rodoreda, a dark and dream-like tale of a teenage boy’s coming of age in a remote village in the Catalan mountains. I was particularly drawn to it because of its political context: Death in Spring is often thought to be an allegory for life under a dictatorship, based on Rodoreda’s own experiences after she was exiled by Franco’s regime during the Spanish Civil War. It’s a deeply unsettling dystopia about the nature of power and oppression, which feels extremely timely.

In June I published The Beautiful Summer by Cesare Pavese: set in 1930s Italy, it follows a sixteen-year-old girl named Ginia who falls under the spell of a sophisticated older woman and her bohemian friends. She becomes entangled in a desperate love affair with an artist – a love affair that is destined to last no longer than the course of the summer. Pavese is one of my favourite writers of all time, whose work I discovered as a teenager studying A Level Italian, so when the idea for this series was conceived, this novel was at the top of my wish list. 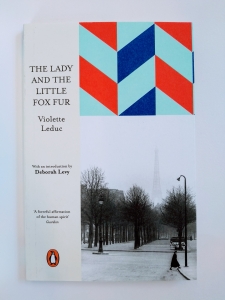 The most recently published title in the series is The Lady and the Little Fox Fur, an existential French feminist classic by Violette Leduc. In 1960s Paris, an old woman wanders the streets, looking for food – and instead finds a discarded fox fur scarf which changes her fortunes forever. It’s a stunning portrait of Paris, of the invisibility we all feel in a big city, and ultimately of the hope and triumph of a woman who reclaims her place in the world. I first came across Leduc through a film about her life that came out in 2013 – Violette, directed by Martin Provost – which was completely fascinating, showing her connections to literary stars like Simone de Beauvoir, Jean-Paul Sartre and Albert Camus. But she is nowhere nearly as widely read as her contemporaries, perhaps because of the controversies that surrounded her work: she is most famous for her memoir The Bastard, which scandalised France with its explicit account of lesbian love. After learning about her extraordinary life, I hunted out copies of her books and fell in love with this bizarre and beautiful novella.

Overall I was looking for short twentieth-century classics which had either never been published in the UK or had fallen out of print – and it was important to me that I found books by a mix of male and female writers. I am expanding the series for 2019, which will feature books from some other European countries.

Q: This week, we are focusing on the topic of translation in publishing – could you introduce the translators of these titles? Did you acquire the works in translation, or were the translations commissioned subsequently?

All of these works were acquired with the rights to use existing translations: Death in Spring by Martha Tennent; The Beautiful Summer by W. J. Strachan; and The Lady and the Little Fox Fur by Derek Coltman. Each has a different style – for instance, Strachan’s translation of The Beautiful Summer was written soon after the book was first published in 1950, giving it a lovely period feel, while Tennent translated Death in Spring in 2009 (for its US publication), and it feels very urgent and contemporary.

Q: These first three books in the series are also introduced by renowned contemporary writers – Colm Toíbín, Deborah Levy and Elizabeth Strout. How did you approach these figures?

I first approached Colm Tóibín to introduce Death in Spring as he is an expert on Catalan literature and was already an admirer of Rodoreda’s work. I knew that Elizabeth Strout was a fan of Elena Ferrante, whose work has similarities with The Beautiful Summer, exploring female friendship, first loves and lost innocence in an evocative Italian setting, and approached her for that reason, hoping that she might love it. Deborah Levy had introduced The Lady and the Little Fox Fur for Peter Owen and has long been a champion of women’s writing. Of course, all three introductions are by writers whose work I love and admire, and their generous contributions have helped immeasurably in finding new readers for these forgotten classics.

Q: The covers are a striking merger of black-and-white photographs suggestive of the contents of each book and brightly coloured geometric patterns. Could you talk more about this design choice?

The idea to bring together photography and pattern came from Chris Bentham, our brilliant cover designer. We wanted covers that felt literary, but also accessible: the black-and-white photographs clearly hint at classic literature, while the vibrant graphics make them feel fresh and exciting. It was important that they have a unified series look, while still reflecting the different subject matter of each novel – so the graphics use colours associated with each country’s flag, and the photograph reflects the setting or main character. 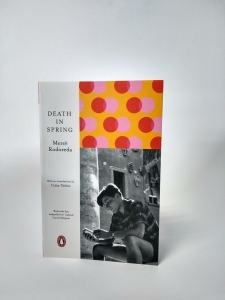 In Death in Spring, the houses in the remote village are painted pink each spring, and a disturbing ritual sees pink concrete poured down people’s throats after they die to prevent their souls escaping – so the pattern incorporates pink as well as the orange and red of the flag. Our picture researcher Alice Chandler found some fascinating photographs: for Heinrich Böll’s The Train Was On Time, the next book in the series which will be published in early 2019, Alice was searching for a photo of a young soldier on a train, as the novel follows a disillusioned German soldier travelling to the Eastern front, where he is certain he will meet his death. She came across an image of Hans School, a founding member of the White Rose Resistance movement in Nazi Germany. School was later executed by the Nazis, a particularly poignant fact given that Böll opposed Nazism, and the novel is a taut, intensely powerful exploration of the absurdity of war.

Q: The series is designed to bring ‘forgotten’ or ‘lost’ European titles to British audiences in the English language. What is the significance of such a project against the current political backdrop?

As someone who studied French and Italian at university, and spent time living abroad, I felt compelled by the current political climate to begin a new initiative to promote European literature to British readers. Translated fiction offers a unique insight into other cultures; it promotes the exchange of ideas between writers, and empathy between readers. In a time when our politics are increasingly polarised, I think it’s important that we open our minds to other perspectives, and inhabit other cultures – and this seems to be something many readers are looking for, too.

Q: You’ve observed that only around 3 per cent of books published in English are in translation, and less than a third of literary translations published in the UK are written by women. Do you see this series as contributing to changing those statistics?

Absolutely – I hope the Penguin European Writers series will not only introduce readers to some of Europe’s greatest authors, who are all hugely acclaimed in their own countries but deserve to be far more widely read in the UK, but will also inspire readers to seek out more works in translation from all different countries and backgrounds. I purposefully chose short novels in the hope that readers would be willing to take a chance on an author they had never heard of before, from a country whose literature might be unfamiliar, and go on to discover more about that place or time.

Q: You studied French and Italian at university. How important has language learning been to your subsequent career?

Languages aren’t a requirement for my role, and most undergraduates who want to pursue a career in publishing study English Literature. However, I’ve found that learning French and Italian has been a real asset, allowing me to find writers for Viking who might not otherwise have joined our list. For instance, I recently published In Paris: 20 Women on Life in the City of Light by Jeanne Damas and Lauren Bastide, which brings together profiles of twenty diverse and inspiring Parisian women, accompanied by full-colour photographs and lists on the best places to go and things to do in Paris; I read the original French edition as part of my bid to acquire the UK rights. Languages also gave me my first experience in the publishing industry: on my year abroad from the University of Bristol I was lucky enough to find a paid internship at a boutique art publishing house in Paris, which helped enormously in learning about the industry and finding more placements after graduation. Knowledge of other languages opens doors, and offers surprising opportunities – I only wish I knew more!

This interview was conducted by Dr Rosemary Deller, Managing Editor of the LSE Review of Books blog.

Note: This interview gives the views of the author, and not the position of the LSE Review of Books blog, or of the London School of Economics. Images are provided courtesy of Penguin and should not be reproduced without the permission of the copyright holder. Image Credit: Penguin European Writers novels (Penguin/Chris Bentham). 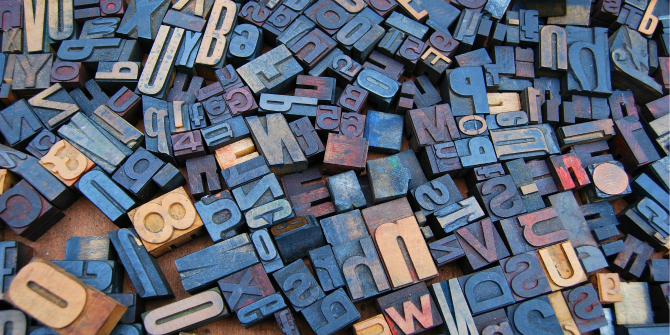